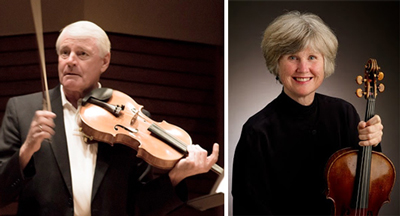 Since his appointment to The Cleveland Orchestra in 1976, principal viola Robert Vernon has appeared as soloist with the orchestra on more than 100 occasions, both in Cleveland and on tour.

On Thursday, November 18 at 7:30 pm in Severance Hall, Vernon will share the solo spotlight with his longtime stand partner and TCO first assistant principal viola, Lynne Ramsey, for the world premiere of Richard Sortomme’s Concerto for Two Violas on themes from Bedřich Smetana’s “From My Life” Quartet. The concert, under the direction of music director laureate Christoph von Dohnányi, will also include Smetana’s Overture to The Bartered Bride and Franz Schubert’s Symphony in C (“The Great”). The program will be repeated on Friday and Saturday at 8:00 pm.

“I have known Bob since we were in our early teens,” composer Richard Sortomme said during a telephone conversation from his home in Mount Vernon, New York. “The seeds for this commission were actually sown well over 40 years ago when we were at Meadowmount, and in no small way it involves The Cleveland Orchestra. But until I sat down to write the program notes, I didn’t realize exactly how full-circle this really is — for me to be writing the concerto on themes from Smetana’s ‘From My Life’ Quartet for Bob’s final season with the Orchestra.”

Sortomme and Vernon were first introduced to Smetana’s quartet at a concert at Meadowmount School of Music programmed by Joseph Gingold, TCO concertmaster at the time. Sortomme’s first performance of the work was also at Meadowmount with Bob Vernon — then a violinist — assuming viola duties. From that point forward, performances of the quartet brought Sortomme and Vernon together again as colleagues many times.

In his composer notes Sortomme reflects:

A year and a half ago, when Bob called and told me that I was about to receive my second commission from The Cleveland Orchestra, my joy-filled mind secretly began to entertain “From My Life” again…

Over the next two months, however, I couldn’t shake this fascination, maybe even an obsession, for wanting to compose on themes “From My Life.” Then a bright light went off and I understood — Bob and I, and [my wife] Carol, had performed this piece so many times, as youths and young adults, it meant so much to us…

Smetana’s quartet has further ties to The Cleveland Orchestra. “George Szell was a huge fan of this quartet,” Sortomme pointed out. “In fact he made a transcription of it and performed it many times with the Orchestra.”

Sortomme, Vernon & Franz Welser-Möst at the 2007 premiere of Rhapsody

Although Sortomme did compose during his high school years at Juilliard Prep, his obsession with the violin took over once he entered the upper school. His desire to compose resurfaced in the late 1980s. “I continued to play and didn’t stop entirely until about 2006, when I was writing my Rhapsody for Viola and Orchestra for Bob. I’m kind of an all-or-nothing guy,” he said, “and once I had written my first pieces — and they were good — that’s when I knew that composing was what I wanted to do.”

Being a violinist and having played viola quite a bit, the composer said that he didn’t encounter many challenges in writing his double concerto. “I know where the instrument’s strengths and weaknesses lie, and I’ve discussed them many times with Bob. For this piece we both wanted there to be a lot of intertwining between the two solo lines, so I’ve combined many phrases where one line starts as the dominant voice and the other accompanies, then the two lines swap roles to finish the phrase. Staying out of the lower ‘muddy’ register of the viola was important, although by design, I did put some things on the C string. I didn’t write a pyrotechnical tour de force, but some of the lines do go up to a high E.”

The real challenge for Sortomme was that he had never written a piece based on another composer’s themes. “I know that it’s not an original idea, and many truly great composers have done it — it’s just that I had not done it before.”

Sortomme began by numbering all of the thematic and rhythmic materials in each movement of Smetana’s quartet, although he knew from the start that he wouldn’t be able to include them all. “I didn’t want it to be like a hit parade type of thing. So I chose the ones that I loved and thought were important to the essence of the quartet.”

As he began to write, a compositional challenge soon arose. Sortomme started to question whether or not he was getting close to writing something that sounded more like Smetana than himself. “Sometimes I thought I had gone too far in quoting him, and sometimes I thought I had become too abstruse.” The only exact quote from Smetana in the concerto is from the quartet’s slow movement, one of Sortomme’s favorite themes — although including the exact quote caused him concern. “I called my friend, pianist Robert Levin, and told him about my dilemma, and he reminded me that great composers borrow from each other all of the time. But writing the concerto was still more difficult than I thought it might be.”

END_OF_DOCUMENT_TOKEN_TO_BE_REPLACED

Rodgers & Hammerstein’s Cinderella was originally produced for television in 1957 — seven years after the animated Disney film was released — and starred Julie Andrews. According to the Rodgers & Hammerstein website, it was viewed by over 100 million people. END_OF_DOCUMENT_TOKEN_TO_BE_REPLACED

The story line has its origin in an 1855 play and an 1842 farce that Thornton Wilder mined for his 1938 play The Merchant of Yonkers. When that turned out to be a flop, in 1954 Wilder made the crucial decision to re-center the show around the character of the legendary marriage broker Dolly Gallagher Levi and renamed it The Matchmaker. END_OF_DOCUMENT_TOKEN_TO_BE_REPLACED

The Dodero Center for the Performing Arts at the Gilmore Academy in Gates Mills is one feature of an impressive campus. The auditorium is shallow, the stage is deep, and the ensemble played without a shell. Throughout the program, the sound, especially in instruments’ lower registers, tended to disappear. END_OF_DOCUMENT_TOKEN_TO_BE_REPLACED