The Cleveland Orchestra played accompanist for the evening, with singer Capathia Jenkins soloing in a dozen-plus numbers and conductor Lucas Waldin steering the setlist.

Jenkins — who grew up around gospel and Motown, trained classically for a time, has a career on stage and screen, and now is a regular with orchestras across the country — brought all the right stylings to the songbook repertoire.

This range was on display in tune after tune, sometimes even within one song itself. With the Gershwins’ The Man I Love, Jenkins kept her tone in a subdued jazz register but saved a big belted note for the end, Broadway style. A swinging arrangement of Johnny Mercer’s Something’s Gotta Give had her squall singing where maybe another vocalist would be scatting.

Fans of the Great American Songbook might start to see a pattern to these selections, and Jenkins had spelled it out for listeners by the second half. Ella Fitzgerald’s A-Tisket, A-Tasket is less a standard, more a signature song, and Jenkins’ version found the fun of the original while staying appropriately deferential.

These are big shoes to fill, and in fact, many of Sunday’s arrangements — down to the tempos and key signatures — were in the style Fitzgerald popularized. With some songs, this is unavoidable. All the Things You Are is a big band number now, even if it started life as a soprano aria. 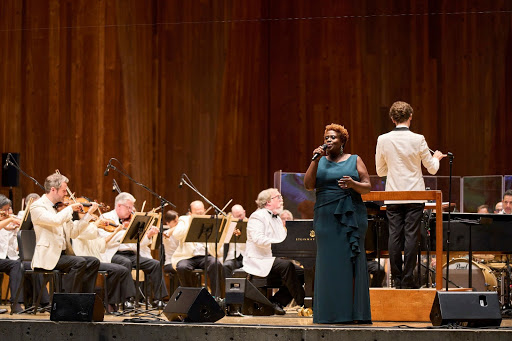 With other songs, this didn’t have to be the case. I Got Rhythm and How High the Moon had Jenkins recreating some of Fitzgerald’s scats note for note. The soloist handled these signature sections skillfully, but as a tribute, they can’t quite live up to the improvisational daring of those famous recordings.

The Orchestra got the chance to shine in a couple numbers of its own. An instrumental version of Over the Rainbow gave the melody to concertmaster Peter Otto, who added the occasional tasteful slide. A medley of Irving Berlin tunes pitted trumpeter Michael Sachs in an extended duet against clarinetist Dan McKelway, who more than held his own.

Less successful was an orchestral treatment of Cole Porter songs — great music but not the same without the songwriter’s second-to-none lyrics. (Waldin did have a charming story to share from the podium though, about Porter and a lost song called Let’s Make it Cleveland.) 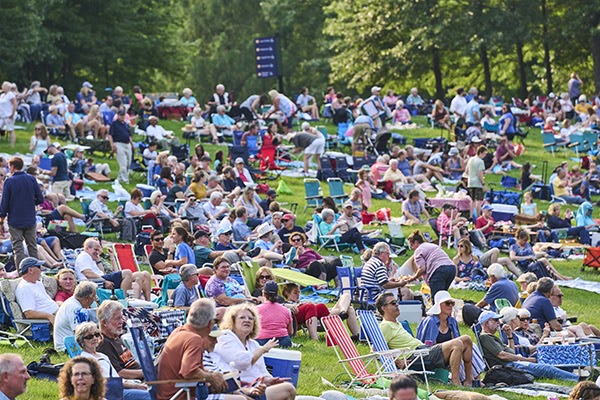 With the soloist back onstage, the orchestral demands still didn’t let up, particularly for the brass. Even Summertime, not a song that requires a stinging brass sound, stuck the trumpets at the top of their register. The saxophonists took solo turns in a few numbers — Get Happy, In the Mood, Zing Went the Strings of My Heart, and more — a nice bridge between the orchestral world and the jazz one.

Jackson began the program with a recitation of Langston Hughes’ poem “Helen Keller” — the first of five poems by Hughes that served as interludes between each piece on the first half. END_OF_DOCUMENT_TOKEN_TO_BE_REPLACED

Pianos with pins and tape on strings, a bass drum and tam tam, crotales, Almglocken, and vibes. Microphones were hooked up all around the instruments. The feed was sent to speakers around the room. Lighting designer Nicholas Houfek hung incandescent globes over the arrangement of instruments from thin black wires stretching across the beams. END_OF_DOCUMENT_TOKEN_TO_BE_REPLACED

From the podium, Elim Chan set an ambitious tone for the evening. The rising star conductor, here in her Cleveland Orchestra debut, has a commanding style, and every twist and turn in Saturday’s performance tracked closely with her baton. END_OF_DOCUMENT_TOKEN_TO_BE_REPLACED