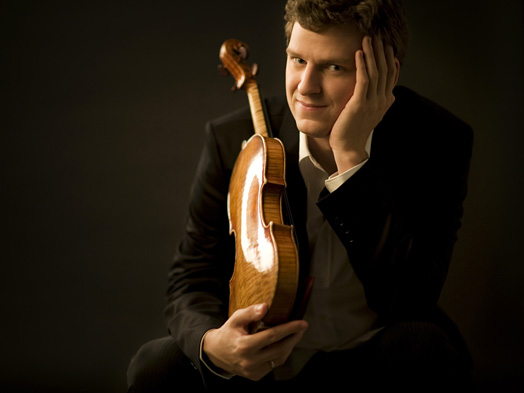 Saturday’s Cleveland Orchestra concert at Blossom graced the kind of crystalline evening for which summer festivals were created. As I drove to the concert through the Cuyahoga Valley National Park, its lush meadows already half in shadow and half in sun, I could hear in my head the idyllic opening of Samuel Barber’s Violin Concerto, almost as summer-drenched as one could imagine a piece of music to be.

When Barber wrote the concerto (his Opus 14) in 1939, he was living in the beautiful Engadin valley in Eastern Switzerland. But Poland was about to fall to the Nazis, and Barber left Europe for the US a day after the invasion, with two movements completed; he wrote the third in the Poconos. A composer like Shostakovich would have written impending disaster into the piece, but Barber gives us almost no hint of strife. In a Romantic, largely tonal idiom, the solo violin threads one long, lyrical line after another through the first two movements.

Saturday’s soloist, the young Canadian violinist James Ehnes, brought to the Barber a calm, focused tone and an utter sense of collectedness: it seemed as if no gesture was extraneous or gratuitous. The first two movements of the concerto share an affect of gentle meditation, and Ehnes brought out their consistency admirably. Though I occasionally longed for more of the passion that Isaac Stern or Gil Shaham brought to their recordings of this concerto, I was happy to bask in the warm, pastoral bliss of Ehnes’s interpretation.

The third movement of the concerto is a show-stopping work of virtuosity, somewhat incongruous with the first two lyrical movements. Ehnes, a violinist of fiercely impressive technical ability, gave no ground on tempo or energy in this piece full of calisthenic passagework. Whether its musical value is on the same level as the earlier movements is a matter of debate, but it certainly works in bringing the concerto to a rousing finish.

Conducted by Cleveland Orchestra assistant conductor Brett Mitchell, the orchestra was simpatico with Ehnes’s lyricism. Mitchell led with appropriate discretion, marking time and cueing transitions without getting in the way of the soloist. The principal clarinet (I could not see who was playing) had a number of lovely moments of engagement and echo with the solo violin, and the principal oboe gave us a gorgeous solo at the opening of the second movement.

Ehnes graciously responded to the audience’s applause with an encore, the final movement of Bach’s C-Major sonata for solo violin. It was a gutsy choice to play such a masterful piece, in moto perpetuo (“perpetual motion”), just after Barber’s flashy third movement. In this case, Bach trumped Barber, in part because without the orchestra, we could hear all the extraordinary precision and clarity of Ehnes’s playing.

The concert opened with an orchestral piece that at first hints at idyllic landscapes —Dvořák’s symphonic poem The Noon Witch, Op. 108. But after its lovely, pastoral opening, this piece of program music quickly moves to the dark side: a fractious brat (nasty little woodwind sound bites), his distraught mother who threatens the boy with talk of a witch, and of course, a visit from the witch herself, who wreaks full orchestral havoc on the household. The piece is hardly a masterpiece, but it is full of instrumental color, at which The Cleveland Orchestra excels. The bass clarinet was especially evocative of the supernatural, particularly in company with a mourning dove just outside the pavilion.

After intermission, the Orchestra was joined by players from the Kent/Blossom Music Festival for a side-by-side performance of Bartók’s Concerto for Orchestra. This exuberant and expansive masterpiece from very near the end of the composer’s life is a test for any orchestra. Not only are the notes themselves fiercely difficult, but giving a sense of continuity and ensemble to this eclectic composition is an enormous challenge. To the credit of these excellent young musicians from the festival — and their side-by-side mentors in The Cleveland Orchestra — the performance was admirable. High-energy playing and pizzazz all around gave vitality to the quirky rhythms and often disjointed structures of Bartók’s brilliant score.

Brett Mitchell’s clear and highly controlled conducting was an essential part of keeping the vast forces of these combined groups on the same page. The frequent solos and small ensemble sections among the winds and brass (many of them difficult and exposed) were performed with confidence and skill, though there were occasional rough moments. The enhanced string sections played with an extraordinary sound — the violin sections as passionate and energized as I’ve heard in a long time from The Cleveland Orchestra, and the violas as rich and mournful as Bartók would no doubt have wanted them.

The opportunity for these young players to perform side-by-side with The Cleveland Orchestra is a capstone to their experience at the festival, whose website points with justifiable pride to its many graduates who have taken positions with major orchestras, including twenty with Cleveland.

That said, excitement was in greater supply than nuance during the side-by-side performance, and passion sometimes won out over balance. Understandably, there seemed to be a sense of anxiety in the air, at times useful in raising the musical stakes, but more often getting in the way of the ensemble and the through-line.

Before the main concert, Brett Mitchell and the Kent/Blossom Music Festival Chamber Orchestra performed Stravinsky’s Danses concertantes and Prokofiev’s “Classical” Symphony in D, Op. 25. I listened to the latter from the lawn — a spritely rendition of this transparent and joyous anomaly from the Russian master.

END_OF_DOCUMENT_TOKEN_TO_BE_REPLACED

Supported by engagingly, yet simple staging by Cara Consilvio, a well-prepared cast of singers told the archetypal story of Cinderella with charm and flair. Framing the production was  a sparse but colorful set and wonderful lighting by Dave Brooks. END_OF_DOCUMENT_TOKEN_TO_BE_REPLACED