With over a hundred Blossom Music Center performances to his credit, Jahja Ling was the obvious — and ideal — choice to replace the indisposed Franz Welser-Möst for The Cleveland Orchestra’s opening concert on Saturday, July 7. Perfect weather and a revelatory performance of Mussorgsky’s Pictures at an Exhibition celebrated the beginning of Blossom’s 50th Anniversary season in a memorable way. And there were fireworks, too.

In place of a previously-announced overture, executive director André Gremillet marked the occasion by recognizing nearly a dozen retired musicians who were seated in the pavilion, with a special bow to assistant principal second violin Emilio Llinás, who had played in the ensemble on Blossom’s inaugural concert five decades ago. He got a hefty round of applause and a second standup. 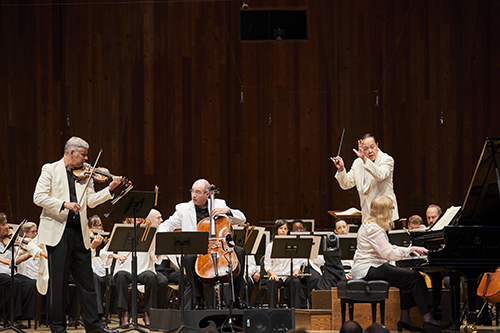 To open the program, Orchestra members Stephen Rose, violin, Mark Kosower, cello, and Joela Jones, piano, were highlighted in Beethoven’s Triple Concerto, both as excellent soloists and in larger-than-life projections on two giant IMAG screens flanking the stage — a new wrinkle presented in partnership with ideastream©.

The Triple is a good piece for a summer al fresco concert. Unlike Beethoven’s more monumental concertos, it’s unpretentious, breezy, and gives the three soloists plenty of opportunities to dazzle more with personal virtuosity than philosophical profundity. Arranged in a traditional if non-intuitive setup with violinist on the left, cellist in the middle, and pianist on the right facing away from the other players, Rose, Kosower, and Jones kept in close touch during ensemble moments but each sailed out freely for extensive solo passages. 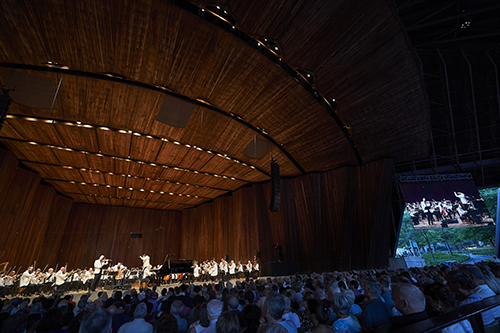 Though there were a few fleeting moments of imperfect intonation, Rose played with poise and sweetness, Kosower introduced the slow movement with an elegant solo, and Jones dispatched florid passages with graceful releases. Tempos seemed slightly unsettled through much of the concerto, and Ling set an unusually laid-back tempo for the third movement Polish rondo, but conductor and trio brought the piece to a conclusion with an brilliant coda. 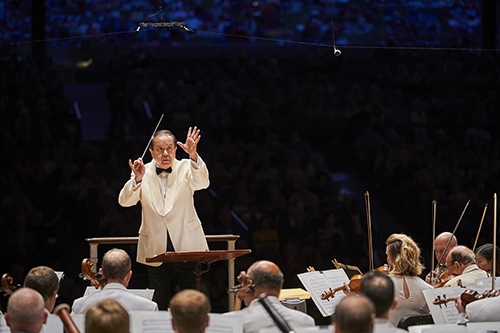 Ravel’s orchestration of Mussorgsky’s Pictures at an Exhibition is so brilliant on the surface that many conductors are content to breeze through the suite as though taking a drive-by tour of a huge art museum. On Saturday evening, Jahja Ling was the all-knowing docent who paused in front of each of Viktor Hartmann’s works to point up interesting details — a brushstroke here, a shading there.

The results were extraordinary. Ling’s unhurried, penetrating gallery tour unmasked hidden elements that rarely come to light — or reach the ear. He stretched out the golden brass lines in “Catacombs” in the direction of eternity, took a deliberate pace in the middle section of “Baba Yaga” that made the Russian child-eating witch especially chilling, and built “The Great Gate of Kiev” into a huge musical monument, wisely saving energy for just one more climax at the very end. 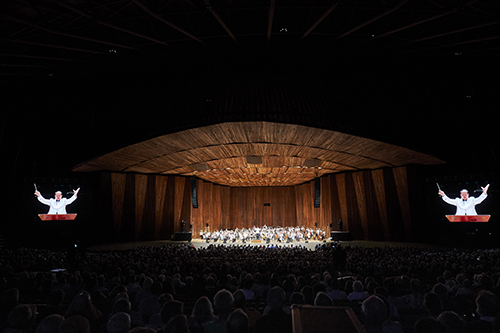 Among the many distinguished soloists: alto saxophonist Steven Banks, whose troubadour song in “The Old Castle” was as beautiful as it was mournful, trumpeter Michael Sachs, who set us off grandly on our gallery tour and later played an especially nattering Schmuÿle, and Richard Stout, whose mellifluous euphonium solo graced the trudging progress of Bydlo, the ox-cart. Here, the IMAG screens came into their own, giving the audience close-up views of individual musicians who are usually swallowed up by the onstage crowd.

The large audience in the pavilion and on the lawn joined in a huge, extended ovation and demanded multiple callbacks for Jahja Ling and the Orchestra. Ling was obviously delighted to be back at Blossom.

Published on ClevelandClassical.com July 10, 2018.
Click here for a printable copy of this article
Return to the Front Page.

It might seem that there’s not a lot left to discover after three decades of experience with the Red Priest’s charming and evocative score, but this performance boasted a secret weapon: the young Spanish violinist Francisco Fullana, now the Orchestra’s artist-in-residence, whose affecting personality and easy virtuosity raised the solo part a quantum leap above the merely extraordinary. END_OF_DOCUMENT_TOKEN_TO_BE_REPLACED

END_OF_DOCUMENT_TOKEN_TO_BE_REPLACED

The Cleveland Orchestra’s second performance of the new season on Sunday afternoon, October 17 at the newly renamed Mandel Hall at Severance Music Center was just such an occasion. If the ensemble’s return to public concerts under the baton of Franz Welser-Möst wasn’t enough reason to light a bonfire, the Cleveland debut of a new work written for one of the Orchestra’s most popular soloists, and the swan song of one of its longest-serving members added extra fuel to the celebration. END_OF_DOCUMENT_TOKEN_TO_BE_REPLACED