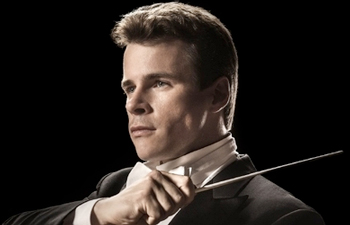 Czech musicians were highlighted on the first half of last weekend’s Cleveland Orchestra programs, including guest conductor Jakub Hrůša and composers Leoš Janáček and Antonín Dvořák, but it was Russian music scored by a Frenchman that brought down the house after intermission — or should we say, knocked the paintings right off the walls?

Modest Mussorgsky’s 1874 piano suite, Pictures at an Exhibition, has been repurposed for orchestra by several hands, but none so brilliantly as Maurice Ravel’s in 1922. Hrůša, fresh off a performance with the Orchestra earlier in the week during its residency at Indiana University, led an incandescent reading of Pictures on Friday evening in Severance Hall. The auditorium was packed with listeners, including a large percentage of young people.

Ravel’s colorizations of Mussorgsky’s representations of Viktor Hartmann’s paintings were further tinted by the Cleveland Orchestra’s glorious brass section, its piquant woodwinds, and by fine solo work from principal trumpet Michael Sachs. Second violinist Jeffrey Zehngut took a melodious turn on saxophone in The Old Castle, and Richard Stout reminded us how the euphonium got its name with his ear-pleasing solo in Bydlo (The Oxcart).

Hrůša’s deft pacing kept the stroll through Hartmann’s gallery moving right along, and the final arrival at the hut of Baba Yaga and the Great Gate of Kiev was a real destination, all the more sonically spectacular because the conductor held some firepower in reserve for the last few bars of the music. The ovation afterward was tremendous. Hrůša was repeatedly called back to the stage and acknowledged soloists as well as whole sections of the orchestra.

The concert opened with Janáček’s Jealousy, five minutes’ worth of explosive, mercurial music that once served as the overture to the composer’s third opera, Jenůfa. It certainly embodies the rapid-fire emotions suggested by its title, but ends with a sudden gesture that indeed seems to be setting up a missing dramatic scene. 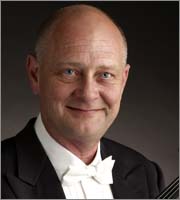 Jealousy instead led into Dvořák’s violin concerto, a work that originally took some time to reach the concert stage, and has never enjoyed the currency of the composer’s cello concerto. Intended in 1879 for Joseph Joachim, who had just premiered the Brahms concerto, the piece was entirely revised at Joachim’s behest but still not to the soloist’s liking (he thought the orchestration was too heavy).

Cleveland Orchestra concertmaster William Preucil took the solo role on Friday evening, seated on a platform at the front of the stage. This positioning made the solo violin seem rather more like a concertato instrument, though the composer’s careful scoring allowed Preucil to sing out lyrically over the orchestral accompaniment. The big orchestral moments come between the solo statements, putting Joachim’s fears to rest.

Lovely woodwind episodes intertwined with the solo line in the first movement, which flows directly into the second. Preucil shaped his mini-cadenzas skillfully, and the abundant melodic lines gave him ample opportunity to shine. The last movement — typical for a Dvořák finale — is a Furiant, though in this case a rather gentle one. Soloist and orchestra engaged in merry dialogues and brought this engaging but rather strange concerto to a brilliant, A-Major conclusion. At the end, William Preucil won a warm ovation from the crowd.