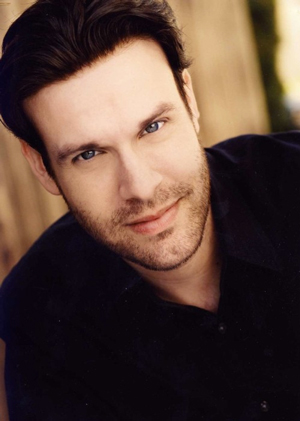 We reached Ricky Todd Adams by telephone at his home in New Jersey to find out how his career trajectory took him to Broadway and national tours of long-running shows — in the Lloyd Webber universe, he’s one of the few American actors to have played the Phantom, as well as Jean Valjean, and Javert. Quite the accomplishment for someone who had very different career plans at the age of 10.

“My dream job growing up was to be a sports broadcaster,” he said. Having been raised with music in the house — his mother was a concert pianist and he dabbled in musical theater in high school — when Adams went off to college in San Antonio, he declared a double major in sports broadcasting and music performance, a combination that he said always makes people laugh. “Then I began to realize that getting a position in the upper echelons of broadcasting was difficult. It’s a long, long journey, and when people get a position they just don’t leave.”

On the other hand, Adams was receiving a lot of positive feedback from his work in musical theater. “I went to New York to do my Master’s and things just started to happen. I was studying at Juilliard in 1998 and went to a random audition where a member of the music staff of Phantom heard me. As a result, I got a call in November of my second year asking me to go on the road with that show.” So Adams wangled a leave of absence from school and joined the company.

“I knew nothing about touring and doing eight shows a week. I was as green as you could possibly be,” he said. Since then, he’s developed a regimen for dealing with the rigors of touring. “It’s like being an athlete,” he said. “You have to watch what you eat, get enough sleep, and hydrate. But in Phantom, we once went from Salt Lake City to Pittsburgh, which are drastically different climates. No matter what you tried to do, it didn’t work.”

The actor’s next big break came when he made his Broadway debut in Lloyd Webber’s The Woman in White, a show that lasted only three months. Adams attributes that to its story, which is based on a British literary classic unknown to American audiences. His second Broadway role was in Schönberg and Boublil’s The Pirate Queen. “That lasted only a few months as well, but I’ve also been in three of the longest-running shows of all time,” he said, philosophically. 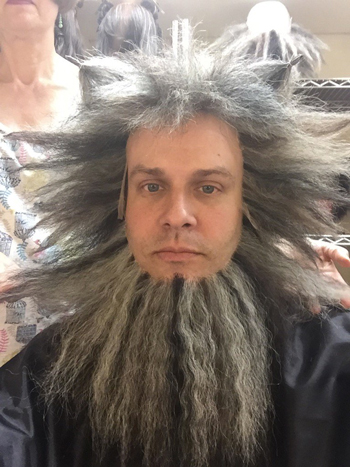 He’s now singing the role of Old Deuteronomy (left) in a Broadway revival of Cats that runs only until December 30 — underlining one of the vagaries of working in musical theater. “I’ve already started auditioning for other shows, and I’ll up the number of my private voice and piano students when there’s not an eight-show-a-week gig on my calendar.”

Adams has sung with conductor Jack Everly on several occasions as a member of the “Best of Broadway” cast. On Sunday evening, he’ll be featured in “This is the Moment” from Jekyll & Hyde, “Oklahoma!,” “The Impossible Dream” from Man of La Mancha “Trouble” from The Music Man, “Stars” from Les Misérables, and “Make Our Garden Grow” from Candide.

Adams said that while the producers of the show take vocalists’ previous roles into account, there’s always a new song to prepare. “One I had to learn from scratch was ‘Trouble,’” he said. “I’m not the world’s best with lyrics, but they gave me quite a bit of warning, so I literally spent about five months nailing it page by page. Now I’ll never forget it. Even after a 5-6 month gap between performances, it’ll be there.”

The vocalist is also looking forward to his first crack at “Make Our Garden Grow.” “I’ve heard it a million times, but never performed it. It will be great to do it with the Blossom Festival Chorus and the other soloists.” That group includes Ted Keegan, a friend Adams met 20 years ago on a Phantom tour. “We see each other all the time on the street in New York on the way to our respective theaters.”

I end our conversation by asking Ricky Todd Adams if he ever got to fulfil his original dream of sports announcing. “Oddly, yes, but not professionally,” he said, explaining that during college he had a summer internship with a Dallas radio station and got to sit in the press box and interview players at Texas Rangers home games.

“I got to be good friends with Brad Sham, the play-by-play voice for the Dallas Cowboys. About 5 years ago I was touring with Les Mis in San Francisco and the Cowboys were playing in Oakland, so he got me into the press box for a pre-season game. It was really boring, so he gave me a headset and said ‘We’re going on the air when we come back from the commercial break.’ So we talked for 5 or 10 minutes. I never did it professionally, but I got to go to a lot of free games with him so it’s paid off in a different way.”

Jackson began the program with a recitation of Langston Hughes’ poem “Helen Keller” — the first of five poems by Hughes that served as interludes between each piece on the first half. END_OF_DOCUMENT_TOKEN_TO_BE_REPLACED

Pianos with pins and tape on strings, a bass drum and tam tam, crotales, Almglocken, and vibes. Microphones were hooked up all around the instruments. The feed was sent to speakers around the room. Lighting designer Nicholas Houfek hung incandescent globes over the arrangement of instruments from thin black wires stretching across the beams. END_OF_DOCUMENT_TOKEN_TO_BE_REPLACED

From the podium, Elim Chan set an ambitious tone for the evening. The rising star conductor, here in her Cleveland Orchestra debut, has a commanding style, and every twist and turn in Saturday’s performance tracked closely with her baton. END_OF_DOCUMENT_TOKEN_TO_BE_REPLACED