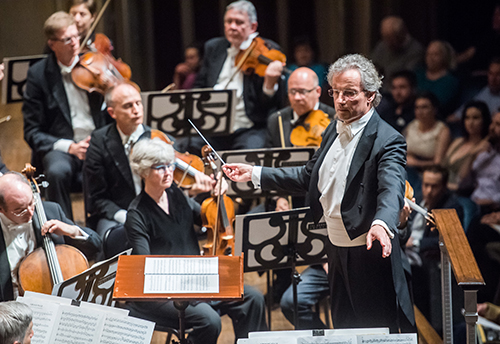 On Thursday, October 4, in a nearly-full Severance Hall and on a stage so packed with musicians that percussionists had to navigate sideways to change instruments, Franz Welser-Möst led The Cleveland Orchestra and Chorus in a strategically- paced performance of Gustav Mahler’s “Resurrection” Symphony as remarkable for its vast dynamic range as for its sonic magnificence.

A powerful tremolo from the upper strings set up the menacing opening theme from cellos and basses that devolves, as so many Mahler movements do, into a funeral march. Ninety minutes later, after taking the audience on an extraordinary itinerary of emotions, Mahler concludes his symphonic essay into the meaning of life on an ultimately affirming E-flat chord that stretches into eternity.

Along the way, we are entertained by a charming country dance (that suddenly turns dark), disquieted by a twice-borrowed scherzo (that suddenly turns dark), consoled by a radiant mezzo-soprano song about faith (nearly blotted out by an ear-splittingly dissonant chord), and unnerved by a lengthy movement depicting the Last Judgment (with another funeral march). Then in hushed tones, the chorus finally enters with the promise of resurrection.

Lots more happens, of course, for this is a Mahler symphony, and those can embrace whole worlds. The Cleveland Orchestra’s uncanny precision and its ability to instantly change the emotional temperature of the music contributed phenomenally to the experience. The Cleveland Orchestra Chorus, prepared by Lisa Wong, was exquisitely responsive to Welser-Möst and able to follow up gossamer pianissimos with robust fortissimos.

Mahler was very particular in his written directions to conductor and musicians, and many conductors do the composer one better by layering their own interpretations over what he had in mind. Rather than distorting Mahler’s music, Welser-Möst respected it, largely letting it speak for itself. His approach paid off. The Symphony moved along nicely with no distortion of tempos and no hyping of what was already highly emotive. And Welser-Möst honored the composer’s directive that there be a pause of five minutes after the first movement in a practical fashion: he used the time to unobtrusively bring the chorus and soloists onstage. 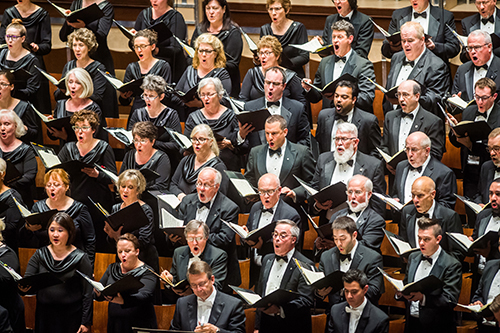 High points included the third-movement scherzo, the reworking of a Mahler song in which St. Anthony preaches — without much effect — to the fishes. While some of the moral of the Fischpredigt comes through into the symphony, so does the subliminal message of a song from Schumann’s Dichterliebe which is clearly referenced through its shared time signature, key, and rather chilling postlude.

Other special moments were provided by offstage musicians, who sounded the trumpet calls announcing the Last Judgment, and later wandered past the scene like a street band that had lost its way. Mezzo-soprano Sasha Cooke shone in the affecting Urlicht movement, and joined soprano Joélle Harvey in trading ecstatic upward lines in the O glaube stanzas of Klopstock’s Resurrection Hymn.

After embracing and losing faith a number of times during the symphony, Mahler allows himself a final moment of doubt before a triumphal ending. In his own words, “There is no punishment and no reward. A feeling of overwhelming love fills us with blissful knowledge and illuminates our existence.”

That epiphanous moment was undergirded by the powerful tones of the organ, for which Joela Jones — along with the rest of us — had waited for 90 emotionally-wrought minutes.

Photos by Ken Blaze from an earlier performance.

Jackson began the program with a recitation of Langston Hughes’ poem “Helen Keller” — the first of five poems by Hughes that served as interludes between each piece on the first half. END_OF_DOCUMENT_TOKEN_TO_BE_REPLACED

Pianos with pins and tape on strings, a bass drum and tam tam, crotales, Almglocken, and vibes. Microphones were hooked up all around the instruments. The feed was sent to speakers around the room. Lighting designer Nicholas Houfek hung incandescent globes over the arrangement of instruments from thin black wires stretching across the beams. END_OF_DOCUMENT_TOKEN_TO_BE_REPLACED

From the podium, Elim Chan set an ambitious tone for the evening. The rising star conductor, here in her Cleveland Orchestra debut, has a commanding style, and every twist and turn in Saturday’s performance tracked closely with her baton. END_OF_DOCUMENT_TOKEN_TO_BE_REPLACED