Ernst Křenek died in 1991 at the age of 91, having fled his home in Vienna in 1938 and spent the rest of his life in North America. Static and Ecstatic was composed in 1971 on commission from the Swiss pharmaceutical mogul and philanthropist Paul Sacher, who channeled much of his wealth into new music by the century’s leading composers. Křenek was an exponent of the twelve-tone system developed by Arnold Schoenberg.

More colloquially, it tends to be music not much liked by audiences for its apparent lack of melody and harmony. Křenek’s work, in ten sections, alternates between slow, sustained movements and jittery activity, with notes in all registers, and dynamics and instrumentation seemingly at random, but very tightly controlled by the composer.

The Cleveland Orchestra’s first performance ever of the 20-minute Static and Ecstatic was compelling in its constant movement from stasis to ecstasy. Joela Jones played the important piano part, assisted by a member of the percussion section who stood beside the piano and plucked the strings of the instrument. The musical texture was mostly sparse, and the dynamics were usually quite soft, with unusual combinations of instruments creating unique timbres.

Toward the end of the work comes a soft string chorale, with percussion and piano interpolations. At another point an oboe, flute, and clarinet are paired with trumpet and trombone. In place of discernible melody, the work is awash with arresting combinations of musical sounds and flights of quicksilver activity. 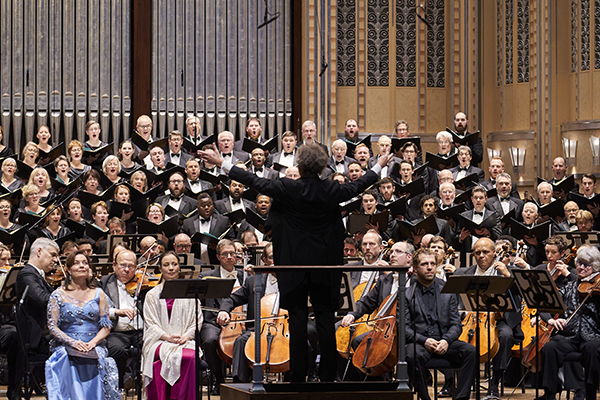 If Ernst Křenek’s Static and Ecstatic is the work of a composer with decades of experience, Felix Mendelssohn’s Lobgesang is the composition of a young man. Mendelssohn was 31 when it was completed in 1840; he died seven years later. Lobgesang (also known as Mendelssohn’s Symphony No. 2 in B-flat) has only been performed at Severance Hall once before, in 1988, which is a shame, because it has something for everyone: thrilling choruses, beautiful vocal solos and duets, and three symphonic movements before the choral part begins.

The Biblical text of Lobgesang is mostly from the Psalms, with several other short passages from the New Testament, plus the Lutheran hymn Nun danket alle Gott.

The symphony opens with a fanfare-like trombone theme that reappears at several points. The rest of the movement develops that theme, and the second movement ensues without pause, again with contrasting slow/quick materials. The third is an Adagio with hymn-like string chorales. 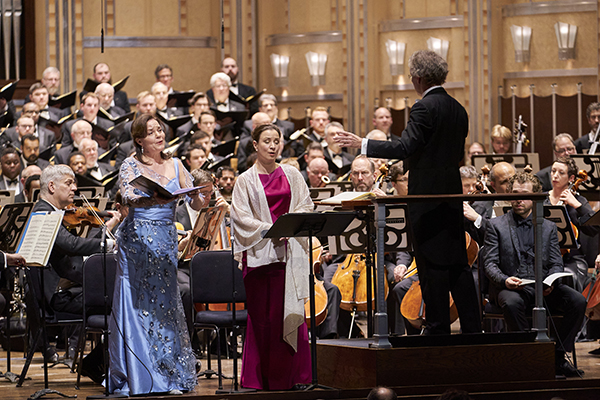 The soloists were top-notch and well-matched to each other and the music. Christina Landshamer’s soprano was light, crystalline, and fluent. Martina Janková was luxury casting for her participation in only one duet in the work (although she made a superb appearance the previous Sunday as soloist in Mendelssohn’s Hear My Prayer with the Cleveland Orchestra Youth Orchestra and Youth Chorus).

German tenor Julian Prégardien made an impressive Cleveland Orchestra debut in his two arias. Prégardien is known especially as a Lieder singer, and his phrasing and attention to detail in the text demonstrated his skill in communication.

The success of Lobgesang depends on the quality of the choral singing. With its excellent blend and sure intonation, the Cleveland Orchestra Chorus, prepared by Lisa Wong, was outstanding. Close to the end of the work, the chorus is required to sing a stanza of Nun danket alle Gott unaccompanied, slowly, softly, and in a high range.

It might have been a minefield, but they managed it perfectly. A later stanza was sung in a bold, thrilling unison, with full orchestral accompaniment. The final choral section develops the opening trombone theme, in a closing hymn of praise and thanksgiving. 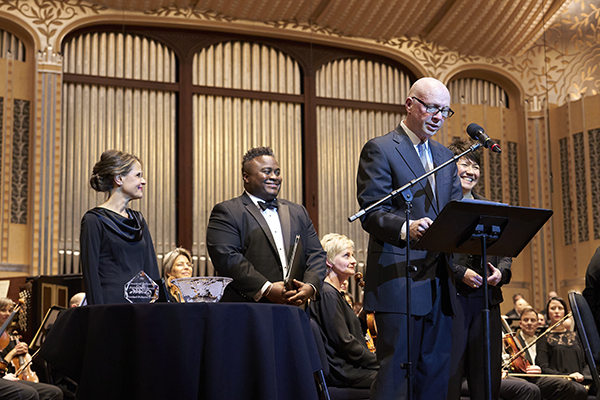 At the close of intermission, Musical Arts Association Chair Richard Smucker presented the 2019/20 Distinguished Service Award to the Cleveland Orchestra Chorus, the first time the award has been presented to an organization, in recognition of their thousands of hours of donated time in rehearsal and performance since the chorus’s founding in 1952.

One member was saluted for celebrating his 50th anniversary performing with the ensemble. Lisa Wong, Cleveland Orchestra Chorus director, accepted the award, and chorus members Vincent L. Briley and Lisa Fedorovich, who serve as co-chairs of the Chorus Operating Committee, also commented. It is probably not well known that the chorus is completely volunteer (with staff leadership), and that they also raise their own funds to operate and take on special activities such as touring with the Orchestra. With the ongoing quality of their performances, this was a richly deserved award.

END_OF_DOCUMENT_TOKEN_TO_BE_REPLACED

Supported by engagingly, yet simple staging by Cara Consilvio, a well-prepared cast of singers told the archetypal story of Cinderella with charm and flair. Framing the production was  a sparse but colorful set and wonderful lighting by Dave Brooks. END_OF_DOCUMENT_TOKEN_TO_BE_REPLACED