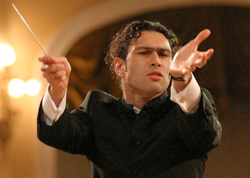 The latest Cleveland Orchestra Fridays@7 event on February 5 took a new tack. Instead of programming world music before and after an hour-or-so long Orchestra performance, the Severance Hall management brought in a DJ and set up both the upper and lower lobbies with couches, comfortable chairs, and tables. This laid-back approach to the evening provided more opportunities for patrons to hang out, enjoy drinks, and have lingering conversations after the performance without having to shout over supercharged sound systems. A nice change.

Speaking of laid-back, the orchestra’s performance of Maurice Ravel’s Piano Concerto in G with guest conductor Vladimir Jurowski and guest pianist Jean-Efflam Bavouzet, which opened the concert in the main auditorium, was the most relaxed but precise account of the piece in recent memory. Things can come undone very early in this hyperactive piece, but from the first crack of the whip to the cascading parallel chords that end the first movement, everything was confidently and excitingly in place. Transitions were easy and perfect, and relaxations into the Gershwin-like jazz episodes sounded just right.

Displaying fingers of steel but never producing a steely tone, Bavouzet dispatched the concerto’s considerable technical challenges with apparent ease. His spinning of the long, seemingly aimless but beautiful line in the slow movement was wonderfully expressive, and it was just as alluringly answered on its reprise by English hornist Robert Walters. 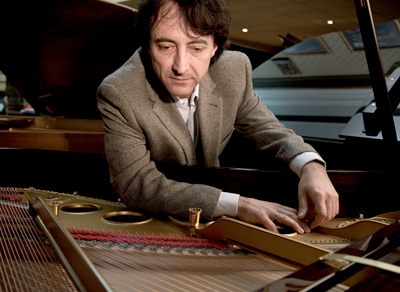 The finale was as neatly ordered and incisive as the opening movement. Conductor, pianist, and orchestra never wandered out of the groove they had so successfully established earlier. Special bows went to Walters, principal trumpet Michael Sachs, and the percussion section for their meritorious work.

Claude Debussy’s triptych, Images, completed the all-French program. Though not as directly appealing as some of his other orchestral works, Images is rich in colors and, during its third movement, abounds in musical allusions to Iberian culture.

The first two movements take their cues from English and French folk music. “Gigues,” based on an English country dance tune first heard on the oboe d’amore (expressively played by Robert Walters) becomes more complex as woodwinds and horns poach the melody, animating it through their own variations. In 1923, Debussy’s collaborator, the composer André Caplet, described the movement as “The portrait of a soul” in some astonishing purple prose quoted in the program book (“…A wounded soul, so reticent that it dreads and shuns all lyrical effusion, and quickly hides its sobs behind the mask and the angular gestures of a grotesque marionette…”)

“Rondes de Printemps” is definitely more cheerful — as one would expect from a piece based on a folk dance celebrating spring. Here, the melody of Nous n’irons plus au bois is broken up and pushed and pulled into shorter and longer fragments. Only its musical molecules remain at the end after a final statement by woodwinds.

In its three sections, “Ibéria” captures the animated spirit of a Spanish town on a summer evening, the scented, diaphanous quality of an Andalusian night, and daybreak on the day of a festival. Juroswki and the Orchestra painted the scenes vividly. Brief solos for flute, clarinets and violin add extra color to the third section, where half the violins and violas strum their instruments like guitars, and the trombones end the piece with a striking glissando. Like Bizet, Debussy only had a second-hand experience with Spanish culture, but he certainly caught its essence in this popular movement.

The cimbalom was the feature of the show, an instrument capable of taking on many personas. Its performer, Chester Englander, has shaped his career around the instrument, and has inspired composers to write more repertoire for it, some of which was presented on the program. END_OF_DOCUMENT_TOKEN_TO_BE_REPLACED

You wouldn’t expect that acoustic from a glance at the nave, which is wide and long, but not especially lofty. But when I guest conducted a local amateur choir and professional orchestra in Beethoven’s Mass in C there a few years back, during the first rehearsal we released the final chord of the “Gloria” and listened in astonishment for the next several seconds. The sound continued to roll down the space like the big wave that surfers dream about. END_OF_DOCUMENT_TOKEN_TO_BE_REPLACED