In the tenth episode of In Focus, which debuted on May 6, The Cleveland Orchestra has revived that tradition on a small scale, programming an arrangement for oboe and piano of a Ravel solo piano piece and following it by a set of variations for string orchestra — a lovely combination of varied works that makes a satisfying, one-hour program.

Walter, who was appointed to the oboe and chamber music faculty of the Paris Conservatory at the unheard-of age of 29, has taught at London’s Guildhall School since 1997 and has more than 230 arrangements to his credit. He knows what he’s doing, and the new Sonatine sounds as though it was originally intended for the oboe.

Much of it lies high in the instrument’s register, but that’s no problem for Rosenwein, whose tone blooms even in the stratosphere, and whose intonation in the upper reaches remains flawless. 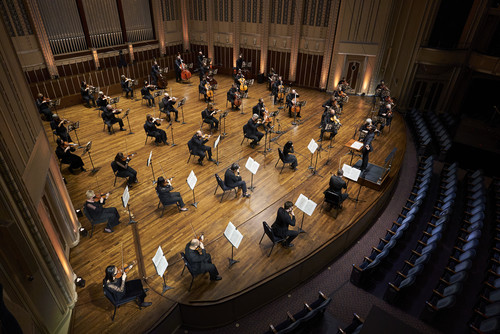 Frank Bridge was Benjamin Britten’s first teacher, and made strong and lasting impressions on the young composer, who started writing a piece in his mentor’s honor early on, but abandoned it in favor of other projects. He leapt at the opportunity to take up a tribute piece again when Boyd Neel was invited in May of 1937 to bring his string orchestra to the Salzburg Festival to premiere a British work. He turned to the 24-year-old Britten, who sketched out his Variations on a Theme by Frank Bridge in ten days flat and completed the work in time for its first performance in July.

Each of the ten variations on a theme from the second of Bridge’s Three Idylls embodies an important personal trait, and additionally, Britten incorporated parodies of various musical forms like the Viennese Waltz and the Funeral March into his piece. In its easy handling of musical materials, it will remind the listener of Britten’s “Purcell Variations,” a.k.a. The Young Person’s Guide to the Orchestra — it even ends with a fugue that nobly restates Bridge’s theme in the same way that Britten recapitulates Purcell’s. 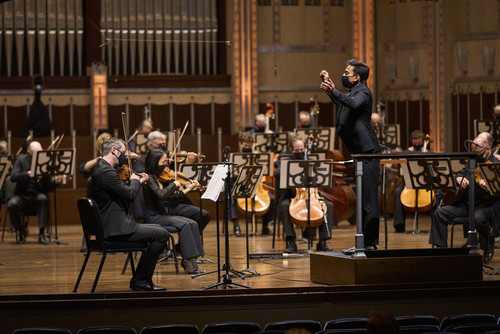 Associate conductor Vinay Parameswaren leads a vibrant performance that invites The Cleveland Orchestra strings to sing in many colors and play with remarkable precision although spread out all over the Severance Hall stage.

Once again, audio and video production values are superb, although quick and frequent switching between cameras can make the viewer a bit nervous. And for some reason, the color temperature changes when one of the cameras pans out for wide shots.

Jackson began the program with a recitation of Langston Hughes’ poem “Helen Keller” — the first of five poems by Hughes that served as interludes between each piece on the first half. END_OF_DOCUMENT_TOKEN_TO_BE_REPLACED

Pianos with pins and tape on strings, a bass drum and tam tam, crotales, Almglocken, and vibes. Microphones were hooked up all around the instruments. The feed was sent to speakers around the room. Lighting designer Nicholas Houfek hung incandescent globes over the arrangement of instruments from thin black wires stretching across the beams. END_OF_DOCUMENT_TOKEN_TO_BE_REPLACED

From the podium, Elim Chan set an ambitious tone for the evening. The rising star conductor, here in her Cleveland Orchestra debut, has a commanding style, and every twist and turn in Saturday’s performance tracked closely with her baton. END_OF_DOCUMENT_TOKEN_TO_BE_REPLACED