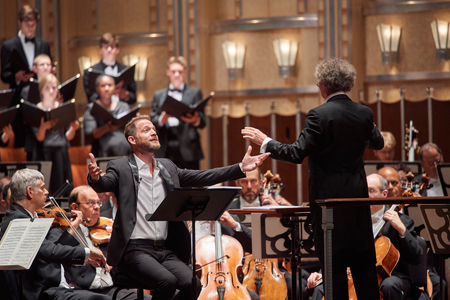 When the 17-year-old Felix Mendelssohn saw A Midsummer Night’s Dream with his sister, he ran right home to write a piano duet on the subject that turned into an overture and later a whole suite of incidental music. Did he have any idea that his music would be inextricably bound to Shakespeare’s play — or its march appropriated for countless wedding recessionals?

The Cleveland Orchestra devoted the second half of its May 11 concert to that overture and incidental music, led by Franz Welser-Möst, with the delightful assistance of the high voices of the Cleveland Orchestra Youth Chorus, soprano Anya Matanovic, mezzo-soprano Emily Fons, and actor Itay Tiran (who channelled a host of characters).

Anyone who is not charmed by Mendelssohn’s score, as Shakespeare wrote elsewhere, “is fit for treasons, stratagems, and spoils.” The opening four chords of the Overture cast an immediate spell and bring the listener into an enchanted world where double-tongued snakes and weaving spiders are held at bay by guardian fairies, and bumbling mortals are transmogrified into beasts.

Though Welser-Möst whipped up the tempo in the fast sections of the Overture a bit beyond the point of charm and spaciousness, his pacing of the rest of the incidental music and his coordination with Tiran were admirable. The flutes shone at the end of the Scherzo, the horns were noble in the Nocturne, and the brass festive in the Wedding March (where percussionist Marc Damoulakis produced a variety of nuanced cymbal clashes). 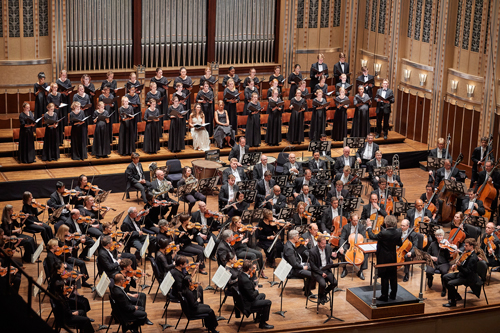 Situated upstage with the chorus, Matanovic and Fons joined the Youth Chorus in lithe performances of “Ye Spotted Snakes” and “Though the House Give Glimmering Light.” Itay Tiran, though difficult to understand at times, did yeoman work of linking the music to Shakespeare’s words, ending the entire piece with the Puckian gesture of popping his cheek.

The first half of the concert conjured another kind of magic. Hans Werner Henze’s Il Vitalino raddoppiato expands on a famous chaconne by Vitali that wormed its way into Henze’s ear as a child. Almost equal parts Vitali and Henze, the work finds the two composers trading material in 4-bar phrases for nearly 25 minutes. 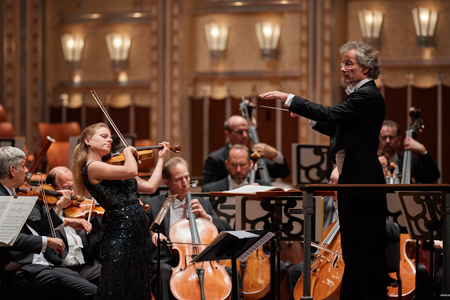 Violinist Julia Fischer was the mesmerizing soloist, dialoguing with the Orchestra and finally going off on her own in an elaborate cadenza. Just when the repetition of bass line and harmony begins to gnaw away at the ear, Henze — in imitation of Vitali — goes off the rails for an unexpected harmonic side trip.

Two more musical items weren’t in the printed program on Thursday. Both were in honor of Mrs. Clara Rankin, who scooped The Cleveland Orchestra by turning 100 a year before her beloved ensemble did. Brought on stage by Welser-Möst, she was serenaded with Schubert’s An die Musik and a round of Happy Birthday.

The first such video, capturing the October 20 performance of Resilience at First Baptist Church in Shaker Heights, delivered handsomely on that promise. Erica Brenner’s sensitive videography and audio mixing preserved brilliant performances of music that illuminated two troubled periods in history: the plague of London in 1665, and the outbreaks of cholera and dysentery that dampened but failed to defeat the human spirit at the end of the American Civil War two centuries later. END_OF_DOCUMENT_TOKEN_TO_BE_REPLACED

The Diamond Brass Quintet opened Rocky River Chamber Music Society’s new season on Monday, October 12 with nobody in the pews at West Shore Unitarian Universalist Church. Like most performances these days, the concert was only attendable online. The players were widely-spaced on the stage, plexiglass shields were in place to cut down on aerosol transmissions, and the quintet took two intervals to go outdoors and let the air in the sanctuary refresh itself. (Rehearsals had been held outside as well.) END_OF_DOCUMENT_TOKEN_TO_BE_REPLACED

“Bewitched,” the first subscription concert of this season by Les Délices, can be summed up in one word: sensational. In her introductory remarks, director Debra Nagy talked about the “Embracing Change” theme of the season and completely rethinking the concert experience for streaming. The detailed planning was in evidence throughout the program. “Bewitched” was not just a concert; it was a carefully planned musical film, with elements of drama and music appreciation, all in support of the inspired program choices featuring Medea and Circe, two famous witches (or sorceresses, if you prefer) of classical antiquity. END_OF_DOCUMENT_TOKEN_TO_BE_REPLACED

END_OF_DOCUMENT_TOKEN_TO_BE_REPLACED

Though it had amassed a vast trove of audio over the decades, The Cleveland Orchestra has come late to the game in the video department. Even so, the organization wasn’t about to rush to produce the equivalent of home movies to keep its patrons engaged while live events were on hold. END_OF_DOCUMENT_TOKEN_TO_BE_REPLACED

END_OF_DOCUMENT_TOKEN_TO_BE_REPLACED

Although it wasn’t the original plan to go online last weekend for the final round of the James Stroud Classical Guitar Competition, moving to a digital format suited the event well. Young performers Aytahn Benavi, Patricia Hernandez, Ian Tubbs, and Eric Wang played in the intimate setting of their own homes, giving everyone who tuned in a front row seat. END_OF_DOCUMENT_TOKEN_TO_BE_REPLACED