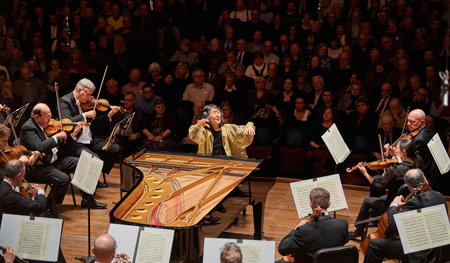 Like a commuter ferry, The Cleveland Orchestra took on more passengers as it went along through the Thursday, April 6 concert featuring pianist Mitsuko Uchida. First, twenty-four string players and four winds came onboard for Mozart’s Piano Concerto No. 12, then the winds disembarked and more string players appeared on deck for a Mendelssohn string symphony. Finally, nine winds joined that larger body of strings for Mozart’s 20th Piano Concerto.

The increase in numbers came with stylistic consequences. The earlier concerto sounded lithe and transparent, the later one weighty and important, even a bit outsized. Beyond the sheer numbers of players involved, Concerto No. 12 expressed itself in the bright, cheerful key of A Major, while No. 20 was imbued with all the inherent solemnity of the key of d minor — the tonality Mozart chose for Don Giovanni, the Queen of the Night aria, and the Requiem, and that Beethoven later turned to for the Ninth Symphony.

While Uchida’s concept for No. 12 on Thursday evening pointed up Mozart’s wit, charm, and refinement, her approach to No. 20 was more Beethovenian: stormy, restless, and romantic. Even the pianist’s cadenzas in the later work were by Beethoven. Uchida played with an elegant presence and technical accuracy in both works. Everything was neatly in place, if not leavened by the occasional mischief that brings smiles and reminds us that the divine Mozart had an earthy sense of humor.

As usual for her annual appearance with the Orchestra, Uchida conducted from the keyboard, facing upstage, standing for orchestral expositions and interludes and sitting for solo passages, when she occasionally had a free hand to gesture to her colleagues. While The Cleveland Orchestra needs little in the way of guidance to play a Mozart concerto, the audience seems to be taken by the sight of a soloist multi-tasking, even when it occasionally leads to some imprecise ensemble playing — as in the Romance of No. 20. 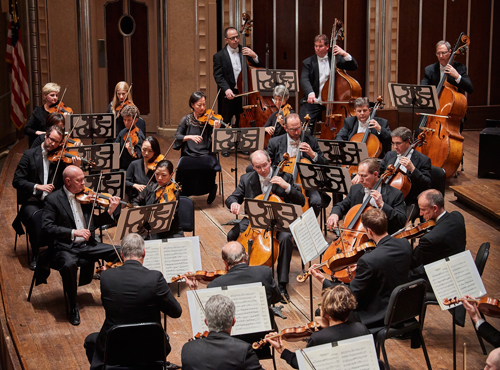 Between the two concertos, concertmaster William Preucil led the Orchestra in its first-ever performance of Mendelssohn’s String Symphony No. 2, written when the composer had just entered his teen years. Energetic and busy, the first and third movements keep the cellos and basses as fully occupied as the upper strings in thrilling scales and passage work. The second allows a bit of a respite, but youthful energy soon returns.

Despite Mendelssohn’s complicated textures and the size of the string section, coordination was superb. The Cleveland Orchestra has been called a huge version of a chamber music ensemble, and in fact, that’s no hyperbole.

Jackson began the program with a recitation of Langston Hughes’ poem “Helen Keller” — the first of five poems by Hughes that served as interludes between each piece on the first half. END_OF_DOCUMENT_TOKEN_TO_BE_REPLACED

Pianos with pins and tape on strings, a bass drum and tam tam, crotales, Almglocken, and vibes. Microphones were hooked up all around the instruments. The feed was sent to speakers around the room. Lighting designer Nicholas Houfek hung incandescent globes over the arrangement of instruments from thin black wires stretching across the beams. END_OF_DOCUMENT_TOKEN_TO_BE_REPLACED

From the podium, Elim Chan set an ambitious tone for the evening. The rising star conductor, here in her Cleveland Orchestra debut, has a commanding style, and every twist and turn in Saturday’s performance tracked closely with her baton. END_OF_DOCUMENT_TOKEN_TO_BE_REPLACED