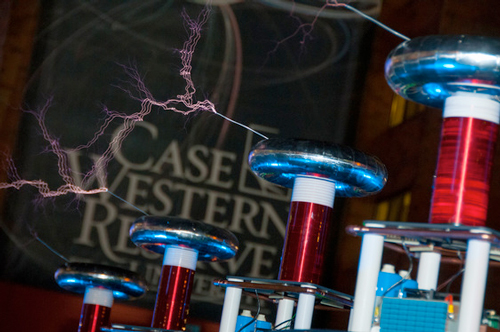 The Cleveland Orchestra will take you to Rome this weekend without needing a plane ticket or a passport. Franz Welser-Möst is your tour guide, and the itinerary includes the Fountains, Pines, and Festivals of Rome as represented in the spectacular tone poems of Ottorino Respighi, with performances from Thursday through Sunday.

The Tesla Orchestra is made up coils which utilize custom electronic hardware and software to convert MIDI-encoded music into pulses which are emitted from the coils. “The musicians each have a microphone attached to their instruments, which translates the sounds they are producing into electric signals,” as Jim Sector, the Orchestra’s Assistant Director for Loyalty Marketing explained during a telephone conversation.

“The sparks are modulating at the frequencies that the instruments are producing at the same time. It’s as if the musicians are playing their instrument and the Tesla Coil at the same time. It produces a sound that resembles that of a vintage video game,” Sector said. “This may be a cliché, but you really have to see it to believe it.” Click here to see for yourself.

The reception is for members of the Orchestra’s Frequent Fan Card, Student Ambassador, and Student Advantage programs, which are part of the Center for Future Audiences. Will older concert goers be turned away from the festivities? “The reception is for students, but we’re not going to kick anyone out,” Sector said with a chuckle.

Launched in 2010, the Center for Future Audiences was established to fund programs to develop new generations of audiences for Cleveland Orchestra concerts with the goal of creating one of the youngest audiences of any symphony orchestra in the country. “The popularity of the programs have exploded, and we’re very happy about that,” Sector said. “We now have about 20,000 students attending concerts at Severance, and about the same number of under-eighteens are attending concerts at Blossom. Over the course of a year we have about 40,000 people attending concerts who are under the age of 25, which amounts to about 20% of our audience on any given night.”

Sector is pleased that students of all academic disciplines are taking profit of the programs. “We do have a high concentration from CIM, Oberlin and BW, and many students are pursuing all sorts of majors. We have a high number of medical students who attend regularly, and the same is true of law students. We’re very proud of these programs. Student discounting is nothing new, but the increase in the frequency of attendance is really bringing the Orchestra into the students’ lives in a way that goes beyond just saying that we have lowered the price of student tickets.”

I asked Jim Sector to say a few words about each of the programs.

Under Eighteens Free: “We use this extensively at Blossom, but it is available for the Severance Hall season as well. At Severance, it applies to Friday and Sunday concerts as well as Family and Rainbow concerts — with a full-price adult ticket you can get one free ticket for an under-eighteen. We’ve expanded the program at Blossom so that with one full-price adult ticket you can get two free tickets for an under-eighteen.

“Amazingly, this program has not had a negative effect on our overall revenue, and it has made it much easier for families to attend a concert at Blossom. The number of households that are now attending has exploded. It’s a wonderful way to introduce young children to attending orchestra concerts. It’s such a relaxed atmosphere.”

Student Advantage Program: “This is our big student discounting program. When students sign up they can buy $15 tickets to any of our classical concerts [excluding Holiday Concerts and At The Movies] throughout both the Severance and Blossom seasons. We announce the availability of tickets at the beginning of each week via an email blast to all the students who have enrolled in the program.

“What’s nice about this one is that it is available for all concerts, and there is no limit to how many times someone can attend. The exact seat locations are left to the discretion of the box office, but seats are available on the floor, the dress circle, and the lower and upper balconies. The students are mixed in with the rest of the audience, which I think makes the crowd feel younger.

“That program was working, but when we looked at our student numbers in 2012, we discovered that students were attending an average of 1.8 concerts — just under twice a year. We wanted to increase the frequency of attendance, so we created the Frequent Fan Card. Students can purchase a card for $50 at the beginning of the season, and they can attend any concert for free throughout the year. They can come as many times as they want and whenever they want. This program is what I think set off the big explosion of student attendance. It has increased the frequency of attendance from that 1.8  to 5.5 times per year, which is a pretty serious increase. We see subscribers attending at the same rate.”

Student Ambassadors:  “We recruit 20 student ambassadors each year to help us spread the word about the student programs. They recruit groups to come to concerts through their social networks. It’s been a nice way of getting the word out, because students can be difficult to market to. They tend to change addresses each year, and they often are not in tune with the other ways that we communicate with audiences.”

The Circle: “This is our young professionals group that is open to 21 to 40 year olds. It was conceived to be a next step for people who had been attending concerts through one of the student programs. Members attend one event per month that alternates between concerts with receptions beforehand, and other events that are oriented toward professional development. We’ve had breakfast sessions with our board members, and we just held a panel discussion with some of the musicians and members of the staff who talked about how we put together a season. We also had a trivia night showdown with the young professional group at the Cleveland Museum of Art. It was a friendly rivalry.”

END_OF_DOCUMENT_TOKEN_TO_BE_REPLACED

Supported by engagingly, yet simple staging by Cara Consilvio, a well-prepared cast of singers told the archetypal story of Cinderella with charm and flair. Framing the production was  a sparse but colorful set and wonderful lighting by Dave Brooks. END_OF_DOCUMENT_TOKEN_TO_BE_REPLACED