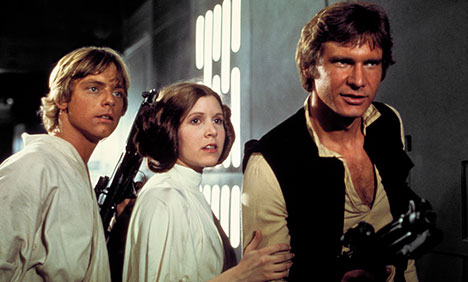 On Friday, August 31 with a jam-packed lawn and many toy lightsabers, The Cleveland Orchestra’s final Blossom Music Center program with assistant conductor Vinay Parameswaran was a certifiable hit. This first of three screenings of George Lucas’s original Star Wars film with live orchestra showed off the many virtues of both John Williams’s iconic score and the Orchestra’s luxurious playing, most notably the power and grandeur of the brass.

George Lucas first released Star Wars in 1977, but in Brucknerian fashion, he has continued to make regular changes — large and small — to his trilogies of space opera films for nearly 40 years. Full of CGI (computer-generated imagery), the version screened on Friday seemed to be the most recent one, which first appeared in the Special Edition released in theaters in 1997.

The movie, of course, tells the story of Luke Skywalker, a young man itching to get off the desert planet of Tatooine. He gets caught up in Princess Leia’s efforts to reach Obi-Wan Kenobi, his elderly neighbor, who turns out to be a Jedi master. With his home destroyed by storm troopers, Skywalker joins Kenobi on his mission and begins to learn the ways of the Force. After Kenobi’s apparent death at the hands of Darth Vader, Skywalker is the pilot who destroys the gigantic, planet-annihilating Death Star.

From the snare tattoo and the brassy and regal 20th Century Fox fanfare, the audience cheered, continuing through to the beginning of the opening crawl in space. That justly famous and extensive musical cue lasts nearly nine minutes and extends throughout the initial space battle. The Orchestra sounded glorious, changing on a dime with Parameswaran’s able direction to fit the constant scene changes that introduce the world of the Empire and the Rebel Alliance.

Star Wars is the perfect film to experience in the technologically recent and extremely welcome live orchestral format. Williams wrote some of his most memorable music for this franchise. The minor-keyed, slightly mournful Force Theme, the swashbuckling Rebel Fanfare, and the alluring Leia’s Theme — beautifully played by wind and brass principals. Parameswaran and the Orchestra clearly reveled in the wonder and power of the nearly 30 musical cues during the two-hour film. Sadly but logically, the Cantina Band songs — which the characters themselves can hear — were part of the audio in the film rather than performed live.

It’s easy to get caught up in Star Wars, so luckily most people probably don’t notice the somewhat tedious way the famous tunes return as important leitmotifs. But there are inspired moments. The most celebrated is when the Force Theme appears early on as Skywalker looks up at Tatooine’s twin suns. It’s hard not to cheer when the Death Star meets its end along with a fantastic musical buildup, and Williams’s Elgarian Throne Room Theme can easily bring tears of joy as Leia gives out medals once this epic story has reached its conclusion.

As the credits ended, the ovation The Cleveland Orchestra received made it clear that movies at Blossom are here to stay.