Though it had amassed a vast trove of audio over the decades, The Cleveland Orchestra has come late to the game in the video department. Even so, the organization wasn’t about to rush to produce the equivalent of home movies to keep its patrons engaged while live events were on hold.

The wait has been worth it. On Thursday, October 15, the Orchestra released the first of five luminous, hour-long video concerts in its In Focus series, viewable for three months after their debut on its new streaming platform, Adella, named in honor of the Orchestra’s founder, Adella Prentiss Hughes.

In keeping with current public health protocols, Episode 1, led by Music Director Franz Welser-Möst, employs only the Orchestra’s string sections, who played music by Respighi, George Walker, and Tchaikovsky, masked and physically distanced on the Severance Hall Stage. No one shared a music stand.

As expected, production values are of the highest quality. The audio, produced by Elaine Martone, is superb, and multi-camera work and attentive mixing keep the video feed lively. Colored lighting adds visual effects and helps draw attention away from rows of vacant seats. 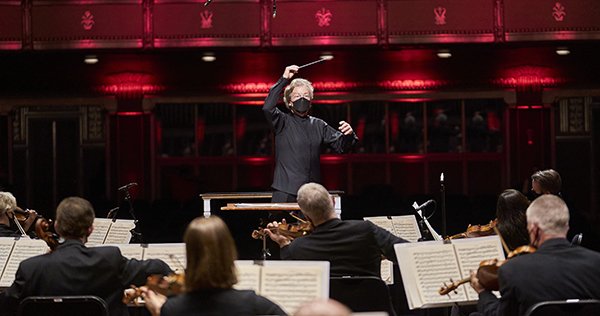 Ottorino Respighi’s third set of Ancient Airs and Dances was the gently charming opener on Thursday, followed by the astringency and abstraction of George Walker’s Antiphonys. The orchestral version of Tchaikovsky’s string sextet Souvenir of Florence gives the piece a weight and gravity somewhat at odds with the spirit of a Muscovite luxuriating in the gentle winds of Italy, but after a hiatus of seven months, hearing the rich sonorities of the Orchestra’s strings once again was a wonderful thing.

The long intermission since the Orchestra gathered to record Schubert’s Ninth in March seemed not to affect the musicians, who fell right back into their long established habits of clarity and transparency, even though separated by a double arms’ length from their normal stand partners.

The first episode boded well for the In Focus series, which continues with concerts led by Welser-Möst with pianists Yefim Bronfman on October 29 and Emanuel Ax on November 12, guest conductor Bernard Labadie with pianist Jan Lisiecki on December 3, and guest conductor and composer John Adams with violinist Jung-Min Amy Lee, and pianist Vikingur Ólafsson on December 10.

The only thing missing, of course, is a live, on-site audience to play to, and who will respond with applause and cheers. Not that anyone is nostalgic for coughing, program rattling, or cough drop unwrapping, but at Thursday’s In Focus debut, the sound of silence was intense when the players stood facing the empty hall at the end of each piece. 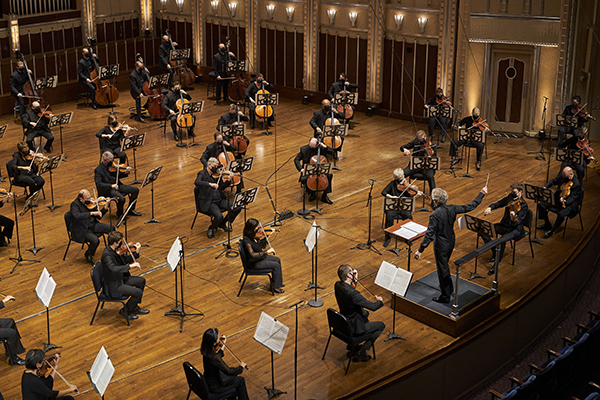 The Cleveland Orchestra’s second performance of the new season on Sunday afternoon, October 17 at the newly renamed Mandel Hall at Severance Music Center was just such an occasion. If the ensemble’s return to public concerts under the baton of Franz Welser-Möst wasn’t enough reason to light a bonfire, the Cleveland debut of a new work written for one of the Orchestra’s most popular soloists, and the swan song of one of its longest-serving members added extra fuel to the celebration. END_OF_DOCUMENT_TOKEN_TO_BE_REPLACED

Cleverly, CityMusic’s latest concert led listeners through these changes one step at a time. “Musical Matrix” took transformation as its theme, and each piece on the October 2 program at the Maltz Performing Arts Center (the second of two performances) put its spin on the subject. END_OF_DOCUMENT_TOKEN_TO_BE_REPLACED