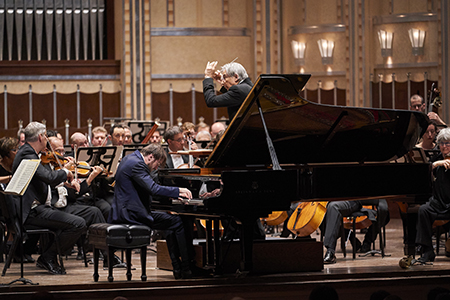 The Russian-born Trifonov, now 24, polished his talents across East Boulevard at the Cleveland Institute of Music under Sergei Babayan, and now maintains a dizzy-making schedule of appearances all over the globe. His performance of Prokofiev’s Second Concerto on Friday evening, March 8 was predictably masterful — dazzling but controlled, wild yet lucid.

It would be intriguing to have been among the astonished audience that first heard this piece at Pavlovsk (near St. Petersburg) in September of 1913. Did the version the composer wrote down from memory ten years later to replace the score lost in the troubles of 1918 take some of the edge off a work that was clearly intended to épater les bourgeois? We’ll never know, but there’s plenty of Prokofiev’s intentional mischief left to savor.

Daniil Trifonov’s highly disciplined playing style — his body quiet, his hands always directly over the notes he’s about to play — gives few visual clues about the torrents of sound he can produce. His performance of the Second Concerto was spellbinding and drew a thunderous ovation from an audience that included a large segment of young people. His short, cheeky encore — No. 3 of Prokofiev’s Sarcasms — offered something of a petit reprise of what had gone before. 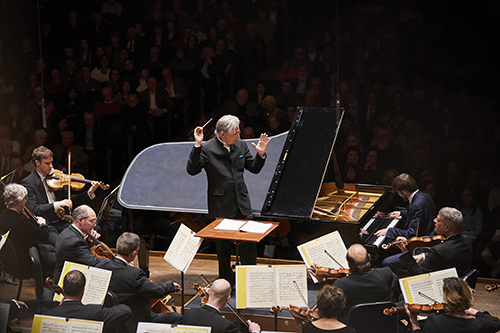 Michael Tilson Thomas offered a Stravinsky rarity for a curtain raiser on Friday evening: the 1944 Scènes de Ballet, commissioned by Billy Rose for a Broadway review. The composer himself conducted its first Cleveland Orchestra performance in 1947, and Oliver Knussen revived it in 1999. The third performance nineteen years later left no strong impression — except perhaps to wish that Stravinsky had made the piece just a bit brasher and glitzier in line with its original purpose. But it gave principal trumpet Michael Sachs, cellists Mark Kosower and Richard Weiss, the violas, horns, and clarinets some interesting incidental solos and duets which were striking in themselves.

The evening ended with a sumptuous and emotional performance of Tchaikovsky’s Sixth Symphony. Conducting from memory, Tilson Thomas drew colorful, urgent playing from the Orchestra, milking the big tunes for all they had to give. Formally, the “Pathétique” remains an odd piece whose final and penultimate movements seem out of order. But you can’t beat it for sheer pathos and depth of feeling — and nobody interrupted its progress by wanting to applaud after the third movement march.

Music director and conductor Daniel Meyer built his playlist around Cleveland themes and scenes. “Exploration CLE” made use of engaging selections from the classical canon and beyond that celebrated “what makes Cleveland so special.” Happily, he and his musicians avoided constructing a visual slide show, choosing to let the music speak for itself. END_OF_DOCUMENT_TOKEN_TO_BE_REPLACED

You could see the relationship at work on a practical level. Repertoire for two players at the same piano requires a certain choreography. There’s just one of each pedal to share, and the hand crossings left and right — which can be so fun to watch a soloist pull off — get more complicated when another person’s involved. At times, Pompa-Baldi drew a hand away from the keyboard and into his body, making room for Friscioni, and at the close of a few delicate phrases, the two were crouched together over the same final notes at one end of the instrument. END_OF_DOCUMENT_TOKEN_TO_BE_REPLACED

The signature sounds of these famous film scores are not so much John Williams’ invention as allusions to other classical pieces. The foreboding half-step from Jaws, growing more and more furious in the cellos and basses, shares something with Dvořák’s “New World” Symphony and Bartok’s Miraculous Mandarin. END_OF_DOCUMENT_TOKEN_TO_BE_REPLACED