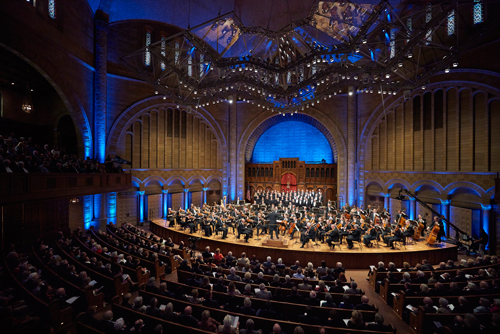 The Cleveland Orchestra crossed Wade Lagoon on Sunday afternoon, September 27 to launch two ships on important missions with a single concert. One order of business was to crack a musical champagne bottle across the bow of the Milton and Tamar Maltz Performing Arts Center at The Temple-Tifereth Israel. The newly renovated University Circle landmark will continue to serve as a space to celebrate major religious holidays and life events while also providing Case Western Reserve University with the first stage in the creation of a long-needed performing arts facility.

At the same time, the event launched Violins of Hope Cleveland on a four-month voyage based around violins that survived the Holocaust. During the performance, soloist Shlomo Mintz and nineteen members of the Orchestra’s violin section, as well as the principal viola and cello, played instruments from the collection of Tel Aviv luthier Amnon Weinstein, who began amassing and restoring such instruments two decades ago. The instruments, which will be displayed at the Maltz Museum in Beachwood through January 3, have inspired an impressive lineup of concerts, lectures, and educational initiatives, the fruit of a groundbreaking coalition of Cleveland institutions. 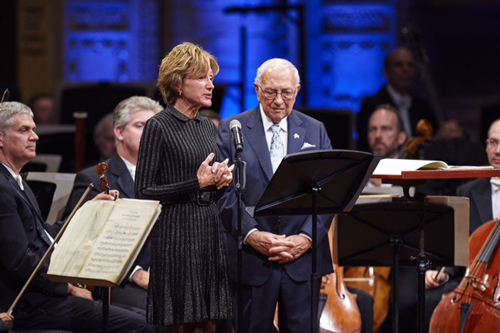 After a brief introductory video, and remarks from Milton Maltz and CWRU president Barbara R. Snyder, Franz Welser-Möst led the Orchestra in Beethoven’s Overture to The Creatures of Prometheus, the first official sounds to be heard in the handsomely renovated sanctuary, now named Silver Hall. Warm and engaging, the hall’s acoustics have been fine-tuned by a stunning canopy of glass and steel that hangs high over the capacious new stage. 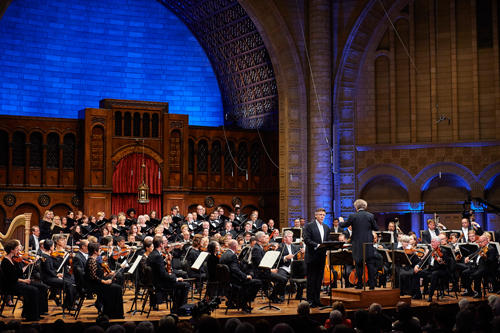 Members of the Cleveland Orchestra Chorus were already in place from the beginning for Arnold Schoenberg’s Kol Nidre, soon to be joined by baritone Thomas Hampson, who sang not a note but authoritatively read the text written by Rabbi Jakob Sonderling and Schoenberg himself for a Yom Kippur service in Los Angeles in 1938, when the orchestra came from the 20th Century Fox film studios. Dramatic, poignant, and inclusive (“We give everyone leave to be one with us in prayer on this day”), the piece reminded all present that Silver Hall will continue to function as a place of worship on certain occasions. The chorus of 50-some voices blended perfectly with the Orchestra and contributed intensely to important climaxes.

The program, which began in a happy mood before turning solemn, moved ahead with Felix Mendelssohn’s cheerful violin concerto. Shlomo Mintz, a co-founder of Violins of Hope, usually performs on a Guarneri del Gesù instrument from 1700 that has three hundred years’ worth of stories to tell. Doubtless the more modest violin he played on Sunday has its own narrative, but one ultimately more tragic. His artistry made it sing Mendelssohn’s tunes eloquently during a performance marked by charm and high spirits. 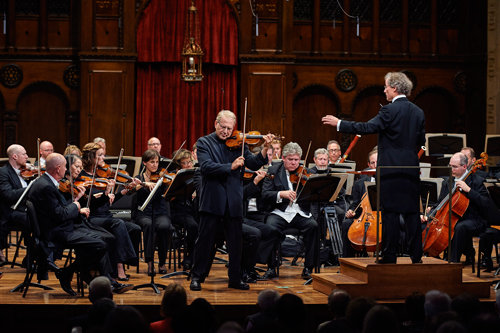 Those of us who wondered why two extra hornists and a harpist were seated onstage during the concerto soon found out. Returning to the stage after the applause had subsided, Mintz gently chided the audience: “You were supposed to clap longer so we could play an encore!” Mintz gifted the crowd with the “Nigun” movement from Ernest Bloch’s Baal Shem (Three Pictures from Hassidic Life), a piece Bloch composed in 1923 while serving as president of the newly-formed Cleveland Institute of Music. 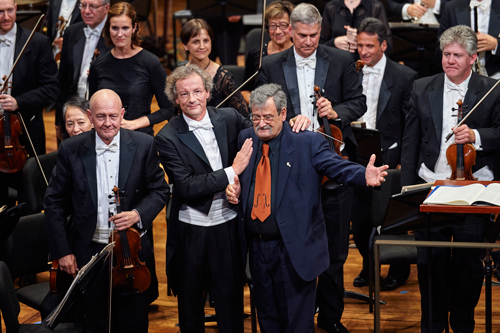 The concert, which was simulcast over WVIZ/PBS and broadcast live over WCLV, classical 104.9 FM, ended with a powerful, spacious reading of Beethoven’s Leonore Overture No. 3, Beethoven’s third of four attempts to write a suitable prologue to Fidelio. This kind of score is second nature for The Cleveland Orchestra, but there was nothing routine about their excellent performance. The sheer volume of orchestral sound provided yet another test of the acoustics of Silver Hall. It passed, with flying colors, and the offstage trumpet calls sounded both distant and present.