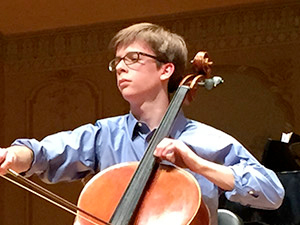 “It’s more that the piece came my way rather than me actively looking for it,” cellist Henry Shapard said during a telephone conversation. “Back in the fall I sat down with my great teacher Richard Weiss and asked him what he would like me to play. I had just played Tchaikovsky’s Rococo Variations in the summer, so I expected that he would recommend something like the Dvořák. But he told me that before I did anything else, I really should work on the Kabalevsky.”

On Sunday, May 3rd at 8:00 pm in Severance Hall, Henry Shapard will perform Dmitry Kabalevsky’s Cello Concerto in g with the Cleveland Orchestra Youth Orchestra under the direction of Brett Mitchell. The program will also include Samuel Barber’s Medea’s Dance of Vengeance, and Bartók’s Concerto for Orchestra.

Although Shapard had heard of Kabalevsky and was familiar with the composer’s violin concerto, which he said he found to be a little trite, he was curious to learn more about the cello concerto. “I read up on it and I listened to a recording that Daniel Shafran made back in the 1950s, and I thought there could be something here. When you’re 16 years old like I am, you don’t often get the chance to make your mark on a piece. With concertos like the Dvořák and Elgar there is a lot that you can get out of them technically, but people record and perform them all the time, and everybody has their favorite versions. But in this case the piece is really new for almost everybody.”

One thing that concerned Shapard about the work is that it’s often labeled as a ‘student’ concerto. “Kabalevsky wrote it for a very skilled conservatory student in Russia. That does give the concerto a little bit of a bad rap — if it wasn’t written for a professional, there must be something wrong with it. But as I started to work on it I realized the fact that it is a student concerto doesn’t make it any easier. There are passages where Kabalevsky has written beautiful melodies, but in other sections it is totally up to the soloist to make an impression. So not only am I learning this difficult piece, I’m also figuring out how I want it to sound to people who have never heard it before.”

Shapard said that learning the piece has been an on-and-off process since the fall. “I needed to put it away in order to learn a lot of other repertoire. When I picked it up again in December it was like giving it a second go, and that was when I really began to love it. There is something about having a piece sit with you for a long time, even if you’re not actively working on it, that lends itself well to performing it. The rehearsals have been going well and I’ve really been enjoying them. There’s nothing like being a kid playing on the stage of Severance Hall. It’s really fun.”

This season marks Shapard’s fifth year as a member of COYO, having joined the orchestra when he was in 7th grade. “It’s been interesting to have gone through many different iterations of the group. I’ve met many different people. It’s a testament to the strength of the institution that it is just as important to me now as it was when I first joined. A lot of that comes from the repertoire that we play — there’s no way around practicing it a lot, because it is hard. And since I still have one more year after this, being the soloist feels more like a team effort than anything. It’s not as if I’m suddenly stepping out of the ranks. It’s more of a real collaboration, but in a way that I had not gotten to experience with the group before.”

Although music is a big part of Henry Shapard’s life, it is not his only interest. He is currently a junior at University School and a student at the Cleveland Institute of Music’s Preparatory Department. He also played on the 2014 Division IV High School National Champion Squash Team and speaks Spanish and French.

“I’m interested in a lot of things. I go to school all day and I play a lot of cello in the evenings and on the weekends. But I have found this to be a great balance. Since I don’t have hours and hours to practice every day, I have to have a good routine and figure out exactly what spots in a piece of music I need to work on. At the same time I get to be exposed to great books, history, and lots of math and other subjects. It’s good because just when I’m getting tired of one thing I can always switch over to another subject.”

He admits to loving sports. “I’ve been a big baseball fan for a while, but I think being a string player is athletic as well. When you’re playing squash you have to focus on breathing and rhythm all of the time. You’re constantly figuring out how to tweak little things in your technique, and the same is true for playing the cello.”

Although he is keeping an open mind about his future scholastic plans after graduation, he is certain they will include the three things he enjoys most: music, history and languages. “They all compliment each other wonderfully. I won’t be heading off to conservatory, but at the same time, high school will not be where I plateau with music. Music has become such a central part of my life that I can’t imagine not working really hard at it. Although I don’t know exactly how it will all play out, it will certainly continue.”

Shapard looks forward this summer to his second international tour with the Cleveland Orchestra Youth Orchestra. “I was 13 years old when we went on the European tour. It was fascinating to play Dvořák in the Dvořák Hall, in his own country, and in front of people who have grown up with his music. The audiences in the Czech Republic and Austria were very receptive. They loved seeing talented young people doing things that they love. I expect that this summer will be the same and it will be interesting because I will also be traveling to China with the National Youth Orchestra of the United States of America. And both times will be with groups that really care about presenting themselves and American music education well.

‘As someone who is not yet an adult, touring is a great way to be exposed to different cultures, not only to play the music of those cultures for the people who live there but also just to breathe different air and listen to different languages. That’s exciting, and I’m so grateful that the COYO has made those opportunities possible. I’m in the ensemble at the perfect time, getting to go on its first European tour and its first Asian tour.”

Jackson began the program with a recitation of Langston Hughes’ poem “Helen Keller” — the first of five poems by Hughes that served as interludes between each piece on the first half. END_OF_DOCUMENT_TOKEN_TO_BE_REPLACED

Pianos with pins and tape on strings, a bass drum and tam tam, crotales, Almglocken, and vibes. Microphones were hooked up all around the instruments. The feed was sent to speakers around the room. Lighting designer Nicholas Houfek hung incandescent globes over the arrangement of instruments from thin black wires stretching across the beams. END_OF_DOCUMENT_TOKEN_TO_BE_REPLACED

From the podium, Elim Chan set an ambitious tone for the evening. The rising star conductor, here in her Cleveland Orchestra debut, has a commanding style, and every twist and turn in Saturday’s performance tracked closely with her baton. END_OF_DOCUMENT_TOKEN_TO_BE_REPLACED