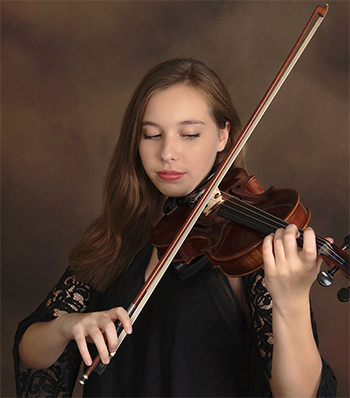 As a young musician, many times the decision to learn a new piece is not a decision at all. Such was the case for violinist Julia Schilz and Max Bruch’s Scottish Fantasy. “My teacher assigned it,” Schilz said during a telephone conversation. “But from the moment I heard it I was so drawn to it.”

On Friday, May 10 at 8:00 pm at Severance Hall, Schilz, a COYO concerto competition winner, will have the honor of performing the work with the Cleveland Orchestra Youth Orchestra under the direction of Vinay Parameswaran. The program also includes Bartók’s Dance Suite and Shostakovich’s Symphony No. 5. Tickets are available online.

Throughout the concerto Bruch borrows Scottish folk melodies such as Through the Wood Laddie, The Dusty Miller, I’m A’ Doun for Lack O’Johnnie, and Hey Tuttie Tatie. That said, Schilz views the concerto as “100% classical music” that is inspired by these Celtic tunes.

Describing the piece, Schilz, who is in her third year as a member of COYO, said that the first and third movements are extremely lyrical.

“They have tricky double stops that are often headaches for violinists. That requires you to rise to a new level of thought process in order to bring its deep and complex emotions to life.”

She noted that the second and fourth movements are virtuosic. “They also have a lot of double stops that are quick and lively, and so to keep them clean while making the lines musically interesting is a challenge.”

When asked about her goals for Friday’s performance, she laughed. “The final movement is nicknamed ‘scratch frantically,’ but hopefully on May 10 people won’t think it sounded that way.”

Schilz, who studies at the Cleveland Institute of Music with Jan Sloman, said her teacher has helped her better understand the concerto. “He’s a proponent of the old-school style, and I’ve loved working on this with him.”

A junior at Hathaway Brown, Schilz is a natural social scientist and has immersed herself in the history of the work. “Bruch was born during the early stages of unification when Germany was starting to modernize on its way to becoming a nation in 1871. And I think it’s crucial to acknowledge how culture responded to that political change. So you have to consider that Bruch was contributing to German intellectual creative culture alongside contemporary philosophers like Nietzsche and Marx, and composers like Brahms.”

The violinist noted that this was also the time that industrialization began to take root, causing an interesting duality of responses to occur. “There’s triumph from the people who are benefiting from industrial progress, and then there’s pushback from people that industrialization left behind both politically and economically.” Schilz said that it’s easy to connect this period of change to the Scottish Fantasy because the piece is a “beautiful amalgamation” of tunes from the countryside and the burgeoning creative culture of the cities.

She firmly believes that it is important for today’s classical musicians to be cultural critics and to take positions on social issues. In April of 2018, Schilz traveled to India with three members of the CIM community to present performances in a variety of venues. The concerts were organized by the Pitch Pipe Foundation, a non-governmental organization founded by CIM alum Jennifer Heemstra and its sister NGO, Kolkata Classics. The foundation engages in social advocacy projects in India, Nepal and the United States.

“We performed and participated in a myriad of projects in places ranging from the red-light district to five-star hotels,” Schilz said. “Just being able to share music in such a variety of settings, and to have that cross-cultural exchange opened my eyes to the difference that classical music can make in the world. That experience has shaped my plans for the future more than I had initially expected. Honestly, I just hope to make a difference in the world, and I do see music as an avenue that will allow me to do that.”

Something that Schilz values is that she comes from a multigenerational musical family. “That’s on my mom’s side, she said. “On my dad’s side not so much — he’s a doctor, and he’s so good at his job and an amazing scientist.” She humorously recalled trying to teach him to play Jingle Bells on the piano to no avail.

“My mom, Kathryn Brown, is head of the piano department at CIM, and my grandparents met in first grade when they were a duo piano team. They eventually toured around Hollywood and recorded some records.”

Returning to the subject of Friday’s concert, Schilz said that she looks forward to collaborating with her COYO colleagues, many of whom she has known for some time. “The concerto is a piece for all of us, and I’m just so humbled by the opportunity to play chamber music with them.”

She also looks forward to joining the ensemble for the second half of the program. “I am so lucky to be playing the Shostakovich, but I just get to sneak into the back of the first violin section.”

Schilz said that Vinay Parameswaran’s own passion for politics and history give him the ability to bring the Shostakovich to life though many dimensions. “He is so careful to educate us about the history behind our pieces, which assures that we don’t play them in a vacuum. This symphony is historically fascinating, and because of that, it’s quickly become one of my favorite pieces.”

Schilz is also anticipating being part of COYO’s European tour in June. “I’m so excited to go and to be able to take in the history of the places that we’re going — Linz and Vienna, Bratislava, and Budapest — are historical centers of western classical music.”

Published on ClevelandClassical.com May 8, 2019.

END_OF_DOCUMENT_TOKEN_TO_BE_REPLACED

The strings-only work by Berg has made relatively frequent appearances on the Orchestra’s programs. In 2021, the musicians recorded it for the In Focus series, and it appeared again on last year’s European tour. Friday’s rendition maintained the group’s characteristic light and effortless playing, each section blending as much as possible to echo the work’s original form as a string quartet. At fifteen minutes total, the piece is quite short, but the dense encoded musical meanings require some extra-attentive listening. Splitting up the three movements ensured that each one could be appreciated on its own. END_OF_DOCUMENT_TOKEN_TO_BE_REPLACED