This past Friday evening, while waiting for the start of the Cleveland Orchestra Youth Orchestra’s concert at Severance Hall, I ran into some friends whose granddaughter was performing with the Orchestra. They could not have been more proud. And proud they should be — along with the many other family, friends, and audience members — because, under the direction of talented music director Vinay Parameswaran, it was an excellent concert that made few concessions to the reality that COYO is a student orchestra.

Despite the yearly flux of incoming and graduating members of the Orchestra, the quality remains consistently high. Just to look at the program — John Adams’ The Chairman Dances, Samuel Barber’s Violin Concerto, and Johannes Brahms’ Symphony No. 2 — one could very reasonably have mistaken it for a Cleveland Orchestra subscription concert.

Adams wrote The Chairman Dances: Foxtrot for Orchestra in 1985 during the composition of his first opera, Nixon in China, and intended to incorporate it into the opera. But that turned out not to work, and it remains a standalone piece. There are minimalist influences, but with Adams’ own trademarks of complex rhythms, richer orchestrations, and more frequent harmonic changes than in the music of Steve Reich or Philip Glass. The work is in three parts: a first in which a pounding rhythmic motif is constantly varied musically and texturally, a second slightly more calm section parodying earlier 20th-century Latin American-influenced dance music (the actual foxtrot), and a return to the opening music with even more powerful variation.

The Chairman Dances is not a work of great musical subtlety, but it does require precision and constant attention to rhythmic detail. It was fascinating to watch the orchestra members “getting into” the repeated but constantly varied passages, moving with the music. Vinay Parameswaran kept the whole thing musically and rhythmically alive, and never out of control. Pianist Wending Wu had a prominent solo part, and he also made notable contributions in the Barber. The percussion section was kept particularly busy in creating the shimmering sounds essential to Adams’ music. 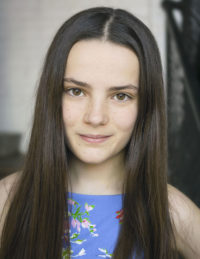 Barber’s Violin Concerto encountered controversy in the run-up to its first performance in 1939 due to its technical challenges. But it has achieved favored status with today’s soloists for its combination of virtuosity and lyricism. The harmonies are tonal, in Barber’s “American Romantic” style, with largely melodic first and second movements, and a third movement that is a perpetual motion tour de force for the soloist, with an unending stream of 16th notes at a very fast tempo, and an accompaniment to match.

Célina Béthoux, age 14 and a student of several Cleveland Orchestra members, was a very capable soloist, pouring out lyrical phrases. In the first two movements, her tone was refined, but in climactic moments she was overpowered by the orchestra — the horn section was sometimes too prominent. Béthoux’s performance showed the promise of continuing success in the future. Oboist Zach Walker played with beautiful tone and elegant phrasing during his second-movement solo.

The third movement begins with a timpani solo, and in addition to the torrent of notes in the solo violin part, there are constant tricky meter changes for soloist and orchestra. Throughout, the ensemble was remarkably together. This was an outstanding achievement for all concerned.

Brahms’ Symphony No. 2 is a mostly jovial work, full of tunes as well as passages of contrapuntal intricacy. After a few rocky moments at the beginning of the first movement, COYO settled in for a highly enjoyable reading. The cello melody at the beginning of the second movement was rich and mellow. The third-movement Presto was well controlled. Principal horn Sophie Calabrese was solid in several significant solos. The rest of the brass section got their time to shine in the thrilling ending of the last movement.

END_OF_DOCUMENT_TOKEN_TO_BE_REPLACED

Rodgers & Hammerstein’s Cinderella was originally produced for television in 1957 — seven years after the animated Disney film was released — and starred Julie Andrews. According to the Rodgers & Hammerstein website, it was viewed by over 100 million people. END_OF_DOCUMENT_TOKEN_TO_BE_REPLACED

The story line has its origin in an 1855 play and an 1842 farce that Thornton Wilder mined for his 1938 play The Merchant of Yonkers. When that turned out to be a flop, in 1954 Wilder made the crucial decision to re-center the show around the character of the legendary marriage broker Dolly Gallagher Levi and renamed it The Matchmaker. END_OF_DOCUMENT_TOKEN_TO_BE_REPLACED

The Dodero Center for the Performing Arts at the Gilmore Academy in Gates Mills is one feature of an impressive campus. The auditorium is shallow, the stage is deep, and the ensemble played without a shell. Throughout the program, the sound, especially in instruments’ lower registers, tended to disappear. END_OF_DOCUMENT_TOKEN_TO_BE_REPLACED