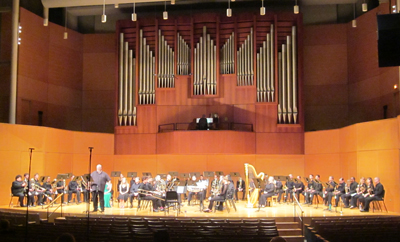 The Cleveland Trombone Seminar capped its fourth annual summer gathering on Sunday afternoon, June 14 in Cleveland State University’s Waetjen Auditorium with a glorious performance of a piece you might never have thought you’d hear arranged for nearly forty trombones, four flugelhorns, tuba, harp, organ, and solo soprano. Arranger Mark Lusk said the idea first occurred to him when he passed a fellow student’s door at Eastman and heard heavenly music issuing forth. “That would sound good on trombones,” he thought.

Some years later, Lusk (who now teaches at Penn State) completed his arrangement of Fauré’s Requiem, Op. 48. Last Sunday, he tried it out to impressive effect to close the final CTS concert, interleaving Fauré’s movements with poetry about death by Donald Hall, T.S. Eliot, Dylan Thomas, and from the Book of Revelation, sensitively read by John Simna and Deborah Yasutake.

Deployed in a wide circle at the back of the stage with a smaller ensemble in the middle, the brass instruments were skillfully orchestrated to replace both a chorus of voices and an orchestra. Philadelphia Orchestra bass trombone Blair Bollinger expressively covered the baritone solo passages in the “Offertorium” and “Libera me,” while Lusk’s daughter, Kaitlyn Lusk (well-known as a soloist in The Lord of the Rings Symphony), sang the “Pie Jesu” with affecting purity.

It worked. The massed trombones and flugelhorns, underpinned by tuba (John DiCesare of the Louisville Orchestra), blended silkily in soft passages and contributed hair-raising intensity to climaxes. Organist Jonathan Moyer and harpist Melody Rapier added contrasting timbres to the mix. Perhaps Lusk should reconsider the scoring of the “In Paradisum” (the piece he heard through the door at Eastman) and bring back the solo soprano for the lovely, calm denouement of the Requiem. 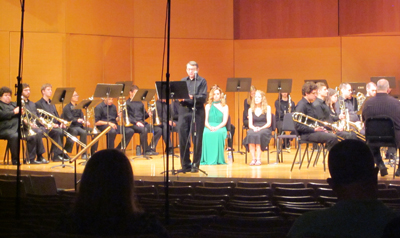 Earlier in the concert, CTS Participant and Associate Ensembles gathered in groups of eight, twelve, and fifteen to play five modern works for trombones with verve and style. With its menacing fanfares, Jack Wilds’s Leviathan aptly lives out its literary-based theme. Dutch composer Steven Verhelst’s Song for Japan, originally written for solo trombone after the Tsunami, appeared in an arrangement for trombone octet that features a beautiful, recurring chorale.

Manny Albam’s Geological Survey for fifteen players was composed for the Eastman Trombone Choir and conducted on Sunday by Mark Lusk. Its jazzy syncopations lives up to the composer’s score marking, “Rock!” Anthony DiLorenzo, composer of many movie trailers, wrote Full Tilt in homage to John Williams. Its high-energy music would be perfect for a quick survey of an action film.

Last on the first half was Steven Verhelst’s One for the Road, a light-hearted overview of four styles of Dutch beer-making. Scored for a dozen trombones, “Leffe” begins with fanfares and advances to the kind of smooth music you’d associate with a road trip (maybe before the beer). “Duvel” is a scherzo with a perpetual motion feeling, played mostly with mutes. “Blonde” is slow and melodic, while “Tripel” boasts a swoony tune in five beats to the bar. A running ostinato leads to a double-time section and a coda in 6/8 meter. Proost! 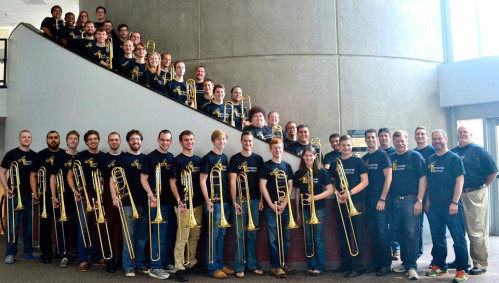 This was a fun concert — though serious enough in the second half — that closed what must have been a delightful week of trombone playing for faculty and participants alike, under the direction of Sachar Israel. Sadly, there was almost nobody left in the audience once the performers took the stage for the Fauré. More lovers of brass music should put next year’s seminar performances on their calendars — which will probably take place during the second week in June, 2016.

END_OF_DOCUMENT_TOKEN_TO_BE_REPLACED

The strings-only work by Berg has made relatively frequent appearances on the Orchestra’s programs. In 2021, the musicians recorded it for the In Focus series, and it appeared again on last year’s European tour. Friday’s rendition maintained the group’s characteristic light and effortless playing, each section blending as much as possible to echo the work’s original form as a string quartet. At fifteen minutes total, the piece is quite short, but the dense encoded musical meanings require some extra-attentive listening. Splitting up the three movements ensured that each one could be appreciated on its own. END_OF_DOCUMENT_TOKEN_TO_BE_REPLACED