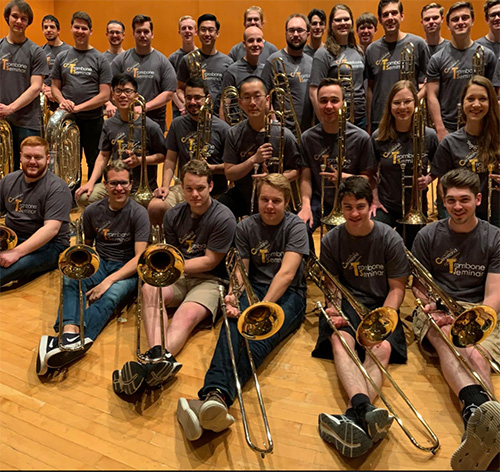 On a recent Sunday afternoon in Cleveland State Univesity’s Waetjen Auditorium, extraordinary sights and sounds filled the room without overwhelming it. For those accustomed to hearing symphony orchestras in concert, forty-seven will not sound like an especially high number of musicians to see onstage — until it becomes clear that the group consists exclusively of low brass players. The ten tubists and thirty-seven trombonists of the Cleveland Trombone Seminar brought finesse and energy to a varied program, their instruments’ reputations for volume and slowness cast aside at the auditorium’s threshold.

Seminar founder, director, and faculty member Shachar Israel was justly praised, and had his own chance to speak near the end of the program on Sunday, June 16. Yet for most of the concert, the figure holding the stage was the trombone-world luminary Mark Lancaster Lusk, warmly characterized as a father figure to Israel and many other players in the course of this Father’s Day performance. Selections included original trombone and tuba ensemble music as well as arrangements of choral, concert band, and piano repertoire.

Sharp articulations and staggeringly gorgeous chords poured forth from twenty-eight trombones and eight tubas in Fred Sturm’s Fanfare. Preparing the audience for the next selection, Lusk introduced musical contrast as a theme of both the Seminar and concert.

By way of demonstration, the players plunged into Morten Lauridsen’s choral classic O Magnum Mysterium. Here as throughout the concert, Lusk displayed a penchant for emotive, effective pacing. When he asked for more — as he did in a climactic moment — he got it, having clearly spent long hours getting to know the associates and participants. Pausing after the composer’s dark, false ending, the group moved onto a tranquil resolution.

For Mike Forbes’s Synergy, a surging showpiece composed for tubas and euphoniums, seven tubists took the stage, with a subsection of the group playing impeccably in parts meant for much higher-pitched instruments. Forget the stereotypes of tuba sound as fuzzy and uniformly low — crisp accents and an unflagging rhythmic drive kept the titular property flowing. Played on so many low instruments, the piece had a terrific weight.

John Stevens’s Benediction brought sixteen trombonists and seven tubists to the stage for a simple, graceful outpouring of feeling. The highlight of the afternoon arrived with Forbes’s arrangement of Debussy’s Engulfed Cathedral, in which trombones take the right-hand piano lines and tubas add the shuddering left-hand parts that, even in the original version, simulate the rafter-rattling bass of a pipe organ. Without switching to higher instruments, the highest tenor trombonists in the group soared, just audible enough to give chills, over the crashing chords of their compatriots. All thirty-seven trombonists and all ten tubists participated. The organ behind them appeared to have fractured into dozens of individual pipes.

END_OF_DOCUMENT_TOKEN_TO_BE_REPLACED

The strings-only work by Berg has made relatively frequent appearances on the Orchestra’s programs. In 2021, the musicians recorded it for the In Focus series, and it appeared again on last year’s European tour. Friday’s rendition maintained the group’s characteristic light and effortless playing, each section blending as much as possible to echo the work’s original form as a string quartet. At fifteen minutes total, the piece is quite short, but the dense encoded musical meanings require some extra-attentive listening. Splitting up the three movements ensured that each one could be appreciated on its own. END_OF_DOCUMENT_TOKEN_TO_BE_REPLACED