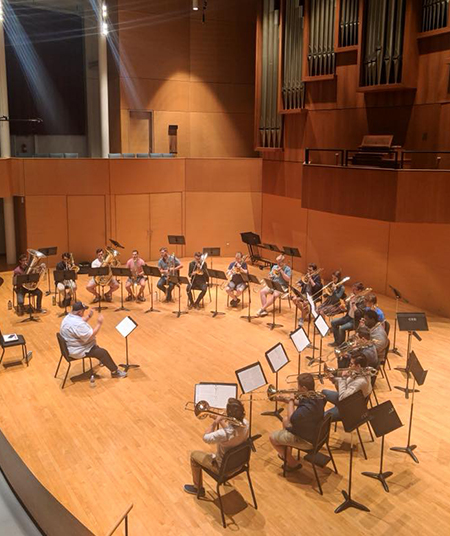 What requires thirty-five music stands, involves movement and memorization, and sheds new light on the works of the classical canon? Last Saturday afternoon, June 23 at Cleveland State University’s Drinko Hall, it was the student participants and associates of the Cleveland Trombone Seminar, playing together as a choir. The low brass players worked wonders in a program of Austro-German Baroque and Romantic repertoire. (Left, rehearsal photo.)

The aria Bist du bei mir often bears J.S. Bach’s name, though it was Anna Magdalena Bach who transcribed it from a work by Gottfried Stölzel. In festival director Schachar Israel’s arrangement for the full cohort of 33 alto, tenor, and bass trombones with 2 tubas, the simple piece grows in texture, volume, and range over its brief duration. It made for a perfect opener: more concise than the version of the Adagio from Bruckner’s Seventh Symphony that followed, but no less weighty.

Israel’s Bruckner transcription, which he conducted, gave several alto and tenor trombone soloists opportunities to shine. A lyrical passage, full of smoothly connected notes in the original, revealed some technical limitations of trombone choirs. However, the group sang out the movement’s familiar melodies with a powerful presence and no straining of tone.

Next, a subgroup — fourteen trombones and a lone tuba — played Edwin London’s conceptual Bach (Again) from 1974, under the direction of festival faculty member Mark Lusk. The work first calls for performers to sing through a Bach chorale of their choice — in this version, Come Sweet Death — then, in a meditative second section, deconstructs the chorale, allowing individual notes to pile up into masses of sound. In Eric Whitacre’s and Erik Shinn’s version, the players leave their stands and sway slowly.  The players did a remarkable job, though London’s concept seems gimmicky by today’s standards.

By comparison, Schubert’s Nachtgesang im Walde felt fresh and vital, here arranged for a quartet of trombones instead of horns, with the remaining players taking the place of a male choir. The soloists were more than up to their task. 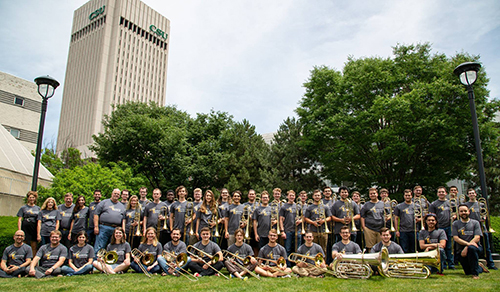 The group swelled to twenty-five for three movements of Mendelssohn’s Symphony No. 5. The players showed remarkable coordination and rhythmic accuracy in the Scherzo, and their dark collective sound gave the always-grim Andante an apocalyptic heft. Tones frayed in some high passages, and Lusk’s voice became audible at one point, but the group’s energy level remained high into the chorale fantasy of the final movement.

The concert had started late due to a false fire alarm in the players’ lodgings, so organizers cut the planned performance of Bach’s Fantasia and Fugue in c for time. It might have made for a more spectacular ending than Strauss’s Der Abend, a choral song from the same year as Ein Heldenleben and Don Quixote. The piece meanders, ever shifting in texture and feeling. However, the reunited full group conjured magic from the dense harmonies. At moments, a certain glorious ringing floated above their lines: the sound of a locked-in ensemble that had ears, chops, and musicianship to burn.

END_OF_DOCUMENT_TOKEN_TO_BE_REPLACED

The Orpheus myth inspired French Baroque composers Jean-Philippe Rameau and Philippe Courbois to write expressive solo cantatas about the famous Greek musician-poet and his futile attempts — because of his own impatience — to rescue his beloved Eurydice from the grasp of Pluto in the Underworld. These are beautifully performed by the clear-voiced soprano Hannah De Priest and the velvet-throated baritone Jonathan Woody (who makes a walk-on appearance in the Rameau). END_OF_DOCUMENT_TOKEN_TO_BE_REPLACED

Now that live concerts are beginning to proliferate, it was delightful to hear Oberlin cello professor Darrett Adkins ring a change on the solo suite format with his Hypersuite No. 3 on September 28 in the Cirigliano Studio Theatre at Lorain County Community College. His program opened the new season of Signature Series performances in Elyria, and was dedicated to the memory of Eva Hornyak. END_OF_DOCUMENT_TOKEN_TO_BE_REPLACED