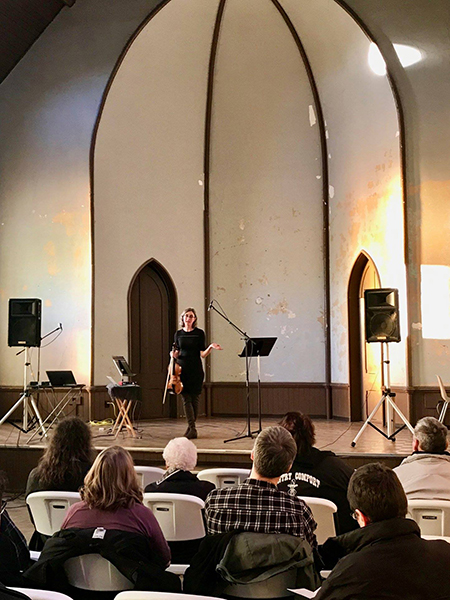 Brod — a member of Chicago’s new-music powerhouse Ensemble Dal Niente — offered a new project, Memento Mori, based on the longstanding visual art convention of including a skull as a reminder of death.

The central — and most successful — work of the four was written for Brod in 2015. Quiet Threnody by Katherine Pukinskis brought the stages of grief to music, but tangled, in the way that life actually proceeds in hard times. Morphing between disjunct major and minor thirds through chromatic phrases, Brod regularly threw off these inspiring lines with violent scratches. She played this surprisingly melodic work with careful precision and emotional depth.

The three new commissions from 2018 all relied heavily on Brod’s carefully cultivated skills in noisemaking. Her noise-scape has many shades and colors — a mark of a master new-music practitioner.

LJ White’s Look After You is a meditation on a mortal life featuring insect-like repeated notes, wisps of wicked ponticello bowing, and hesitant, discordant double stops. A few impassioned tunes power the dessicated landscape. White’s music disappeared in a waft of vibratoless slow trills, while Lisa Atkinson’s (te) salve translates a Latin prayer of the dying to the viola’s extended sound palette. Alongside the swishing of lateral bowing, the work focuses on slow trills, and warbles with creaky rubbing sounds.

Alejandro T. Acierto’s Here, where we continually arrive features a percolating electronic backdrop of prerecorded viola noises. Brod’s hollow, raspy gestures — made possible by two mutes — were freely improvised reactions to this soundscape. Amid stretches of silence, her timbrally variegated bowing, freakishly high trills, and gruffly awkward knuckle plucks painted Acierto’s work as spooky, unresolved air, as if playing from beyond the grave with the ghost of herself. 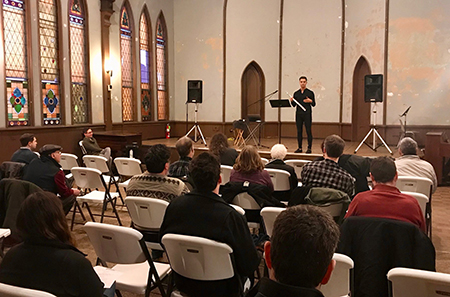 For his set, Kenneth Cox, a doctoral student at Bowling Green State, chose works ranging across the last two decades by more established living composers. Marcos Balter’s Descent from Parnassus (2012) demands that the flutist recite excerpts from Dante’s Inferno while playing. The result was a virtuosic — and often humorously clownish — work full of whisper-shouting and falsetto-whooping. Cox’s amazingly elaborate performance would give any beat-boxing flutist a run for their money.

Eve Beglarian’s I will not be sad in this world (2006) for bass flute is already a classic of spiritually sensual minimalism. Cox moved easily through the affecting watery lines and prayerful meditations of this piece which also featured Beglarian’s Enya-esque singing voice. He finished the early evening concert with his C flute and Philippe Hurel’s rip-roaring Loops I (1999/2000). This flashy, densely chromatic tornado showed the superhuman level of Cox’s technique. It made you want to go home either to practice or to turn your instrument into a bedside lamp.