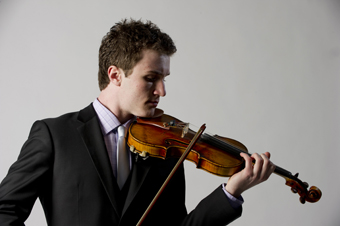 Three years after his first solo appearance with the Cleveland Women’s Orchestra, violinist Michael Ferri will return to Severance Hall to help the ensemble celebrate its 80th birthday with a performance of Tchaikovsky’s Violin Concerto on Sunday, April 26 at 3:30 pm.

Born in Northern Italy and homeschooled in Cleveland, Ferri has studied with Paul Kantor and Jaime Laredo at the Cleveland Institute of Music. Last fall he began his first year at Rice University in Houston, where he has continued to study with Kantor. We spoke by telephone from his home in Cleveland, where he is taking a year off from his studies.

“I figured that I’ve been studying at CIM for upwards of 7 or 8 years. I could use a little break, take some deep breaths, do some reading, collect my thoughts, and do a little practicing on my own,” Ferri said. That ‘little practicing on his own’ includes learning Bach’s b-minor Partita, which Ferri thinks is a rather special piece. “It’s in a far-out key with progressions that are challenging to the ear, and it’s difficult to memorize, but I’m excited to learn it.”

At the moment, Ferri is spending most of his time on the Tchaikovsky. “In addition to playing scales and arpeggios, I’m doing a lot of score study. I want to understand the score harmonically, learn about the way it’s supposed to be played, and make the best musical decisions.”

Michael Ferri has spent a lot of time looking into published scores of the Tchaikovsky. “The piece has been edited by many different hands since 1878. Tchaikovsky wasn’t a violinist and he had some difficulty composing for the instrument, so he consulted others before and after his visit to Switzerland, when he wrote the piece. He had Joseph Kotek around at the time, which was one of the happiest periods in his life. He wouldn’t have been able to compose it as well without a violinist there.”

Tchaikovsky had a difficult time getting the concerto performed. “He wanted to dedicate it to Leopold Auer, who declined, but Auer taught his own version to his students, who went off and made their own changes,” Ferri said. “If you compare the versions of the piece that Oistrakh and Heifetz played, there are many discrepancies. Oistrakh’s is probably the closest to what Tchaikovsky intended. Heifetz’s version is more centered around entertainment value — he added effects for the benefit of the audience.

“Comparing editions and recordings has been a challenge,” Ferri said, “discovering Tchaikovsky’s original notes, then choosing among players’ later decisions. It’s a philosophical as well as a practical study. I haven’t been losing too much sleep over it, but I want to make my performance as close to Tchaikovsky as possible. I’m just the middle-man here, the vehicle who transports the composer’s ideas, feelings and emotions to the ears of the audience.”

Why does Michael Ferri think the Tchaikovsky concerto is among the most popular concertos of all time? “It’s virtuosic and the melodies are very enjoyable,” he said. “They’re simple and easy to remember, and you can walk out of the hall whistling them. I call it the ‘Tchaikovsky Syndrome.’ He’s so caught up in his ideas he can’t help repeating them over and over. Take the theme of the first movement. It’s just two bars of D-major music that he transposes upward and repeats. He does the same thing with the second theme. That represents both his best and worst qualities, a technique for which he’s as often criticized as praised.”

Though Ferri had lessons with his mentors on the concerto a few years ago, he’s elected to prepare for his April 26 performance on his own. Well, with a little help. “I’ve had coachings from books, online videos and the wonderful performances of musicians of the past. If you think about it, YouTube is an amazing vehicle. Heifetz died in 1987, but we have a performance of his from 1935, which is only a couple of degrees of separation from Leopold Auer.

Ferri doesn’t only seek inspiration from the great virtuosos. “I’m a little obsessed with different performances on YouTube, including those by lesser artists. They generate a lot of different ideas. But I’m not out to steal from other performers. This will be a new performance that’s not about Michael Ferri’s rendition, but about Tchaikovsky’s music.”

Ferri said that the Tchaikovsky is a big project to take on. “My friends think a piece that lasts only 35 minutes can’t be that difficult, but it’s actually pretty hellish. And I had to change my priorities after my first rehearsal with the Women’s Orchestra at Judson Manor. I’d been in practice mode in my carpeted bedroom, focusing on my right-hand articulation and on making strong, crisp attacks. At Judson, I was suddenly reminded how important it is to create a beautiful tone and project.”

That will be easier to do in the agreeable acoustics of Severance Hall, I suggested. Michael Ferri concurred, making an analogy to top-notch violins. “I had the chance to play briefly on a couple of Strads and a Guarneri. As soon as you pick up those instruments, everything becomes incredibly easy. The instruments absorb all the mistakes you could possibly make, and Severance Hall works the same way. I played there every week for years with the Cleveland Orchestra Youth Orchestra and it was incredible how easy it was to hear each other on the stage with no delay, and to play together, even in an orchestra that didn’t have the hundreds of years of collective experience that The Cleveland Orchestra does.”

Difficulties aside, Ferri is eagerly looking forward to Sunday’s performance. “It’s a big deal for me. The Tchaikovsky is my all-time favorite concerto and I love it to death. And it’s such an honor to play the 80th Anniversary Gala Concert with the Cleveland Women’s Orchestra. They’ve offered dozens of performers my age the opportunity to play concertos in Severance Hall, and I can’t thank them enough!”

END_OF_DOCUMENT_TOKEN_TO_BE_REPLACED

The portents weren’t good for the week of March 8: first the disorienting switch to Daylight time was to click in on Sunday, then a full moon would rise on Tuesday, then the 13th of the month was scheduled to fall on Friday. Midweek, the spread of COVID-19 added a spiraling series of postponements, cancellations, and shut-downs to an already unlucky period. Like other educational institutions, Oberlin College and Conservatory found themselves making decisions about how to proceed, only to change plans several times. END_OF_DOCUMENT_TOKEN_TO_BE_REPLACED

That old saw about absence making the heart grow fonder: how true it feels now! With concerts canceled to prevent the kinds of confined massing that facilitates the spread of COVID-19, musicians are suffering. Critics have already filed reports on the grim uncanniness of clear schedules and empty halls. Just before this writer’s exile from the scene, however, a spark of life shot skyward, and now stands as a last memory of live performance before social distancing. END_OF_DOCUMENT_TOKEN_TO_BE_REPLACED

The Cleveland Chamber Music Society sailed into relatively uncharted waters on March 3, hosting the Bay Area male vocal ensemble Chanticleer in “Trade Winds.” This musical voyage took its name from a triptych by Zhou Tian, part of a varied program that called in at multiple ports for Italian madrigals, settings of Ave Maris stella (“Hail Mary, Star of the Sea”), an Edwardian part song, a Portuguese Mass, songs from the Pacific, and English sea shanties. END_OF_DOCUMENT_TOKEN_TO_BE_REPLACED