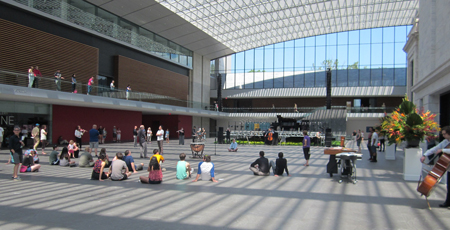 On Saturday afternoon, June 25, the Cleveland Museum of Art continued its centenary celebration with musical events commemorating the Summer Solstice. At 3:00 pm in the Ames Family Atrium, the New York-based new music ensemble Alarm Will Sound presented an alluring performance of John Luther Adams’s Ten Thousand Birds. Written for the Ensemble and designed by its artistic director Alan Pierson, the work follows the cycle of a day, beginning with morning bird songs before moving into the afternoon, evening, and night, ultimately returning to morning.

Like John Luther Adams’s other works inspired by nature, Ten Thousand Birds is intended to be performed in large, open spaces. Many may remember the enchanting performance of his INUKSUIT at Lakeview Cemetery in September of 2014. As then, Saturday’s performance was memorable for bringing people together to walk around the Atrium and experience the beautiful sonic event with one another. This was a “happening.” 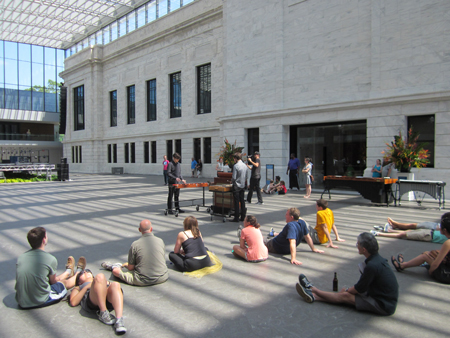 For one hour, Alarm Will Sound took profit of every inch of space available to them, from each nook and cranny of the expansive first floor, to the second-floor walkway, to the entrance lobby. Wearing stop watches, each musician or group of musicians moved from one place to the other with the precision of a dance company, playing individually or in a trio or quartet of colleagues. 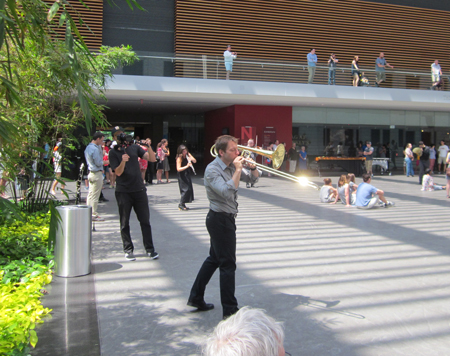 The majority of the good-sized crowd that gathered remained for the duration. There’s just something about these John Luther Adams works that makes them difficult to walk away from. They invite you in, and then you’re hooked.  —MT 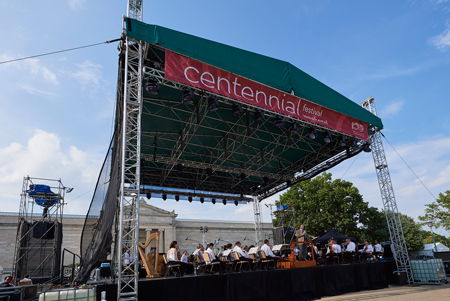 The Cleveland Orchestra crossed East Boulevard on Sunday afternoon, June 26, to bring the centennial weekend of its slightly older cultural relative, the Cleveland Museum of Art, to a festive conclusion. Associate conductor Brett Mitchell led the ensemble in an 80-minute, outdoor concert of music either inspired by works of art or written by composers who had actually visited the museum on their trips to Cleveland. The former included Ottorino Respighi’s Trittico Botticelliano and Adam Schoenberg’s Finding Rothko, the latter Paul Hindemith’s “Engelkonzert” from Mathis der Maler, and five of Béla Bartók’s Hungarian Sketches. The program ended with the original version of Modest Mussorgsky’s Night on Bald Mountain, a nod to the Summer Solstice, associated in Russia with a legendary St. John’s Day witches’ sabbath — and less darkly in Cleveland with the museum’s annual mega-party. 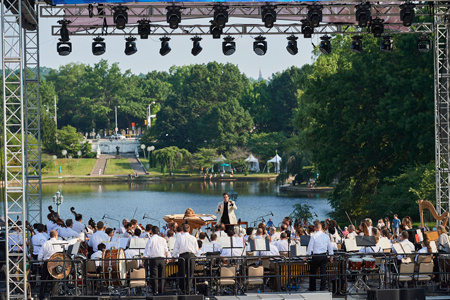 Outdoor concerts always come with conditions beyond the control of the best-laid plans. It was 90 degrees at 5:30 pm on Sunday, and the sun was intense, inspiring the audience to avoid the center seating section between the museum and the lagoon in favor of spots in the shade. A sound system seemed still to be equalized for bands rather than symphonic music (the solstice party took place the night before), and the absence of wind screens on the orchestra mics produced the sound of muffled timpani when stiff breezes blew through. (The wind also played tricks with sheet music.) And at 6:00 sharp, the electronic bells of a nearby church gave an unexpected, 10-minute concert during the Respighi, an event that would surely have pleased Charles Ives. Never mind. Families — and toddlers especially — seemed to be having a great time. 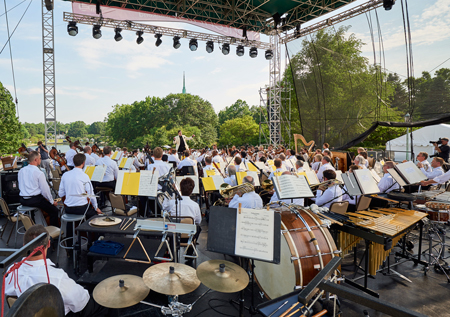 Mitchell gave a nod of appreciation to the Orchestra for coping with these distractions. Despite the tinny sound reinforcement, you could tell that they played with their customary verve and spirit. After changing seats and locations several times, this pair of ears finally found a sweet spot under a tree on the lawn of the Tinkham Veale Center across East Boulevard, directly to the side of the stage. If some of the subtler passages earlier in the concert got lost, the brashness of Mussorgsky’s orchestration carried beautifully outdoors, and the curious angles of the Veale provided some entertaining sonic reflections. 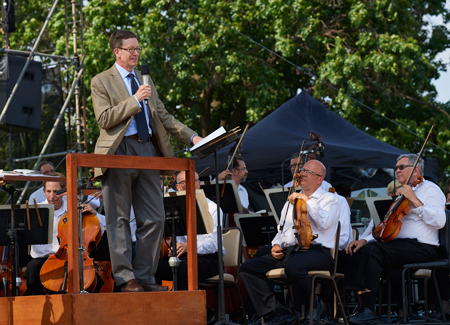 Preceded by a greeting from CMA’s director, Bill Griswold, the afternoon concert did exactly what it was supposed to do: celebrate the first hundred years of a great institution with the assistance of an equally famous University Circle neighbor about to become a centenarian itself. —DH

The cimbalom was the feature of the show, an instrument capable of taking on many personas. Its performer, Chester Englander, has shaped his career around the instrument, and has inspired composers to write more repertoire for it, some of which was presented on the program. END_OF_DOCUMENT_TOKEN_TO_BE_REPLACED

You wouldn’t expect that acoustic from a glance at the nave, which is wide and long, but not especially lofty. But when I guest conducted a local amateur choir and professional orchestra in Beethoven’s Mass in C there a few years back, during the first rehearsal we released the final chord of the “Gloria” and listened in astonishment for the next several seconds. The sound continued to roll down the space like the big wave that surfers dream about. END_OF_DOCUMENT_TOKEN_TO_BE_REPLACED