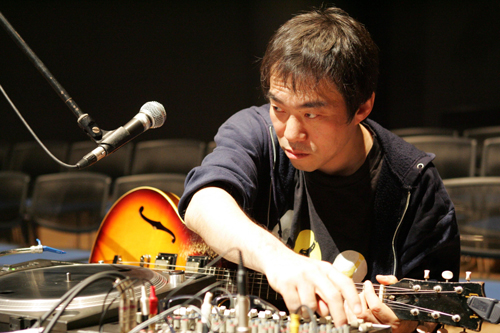 When the young man at the admissions desk offered me earplugs for experimental electronic musician Otomo Yoshihide’s appearance at Transformer Station on Monday evening, May 9, I knew that this was not your run-of-the-mill concert.

Sponsored by the Cleveland Museum of Art, the performance was in the larger west gallery of Transformer Station, with high ceiling and stark white walls, currently hung with recent large abstract paintings by Jon Pestoni.

Most of the 50 or so chairs were filled by a wildly eclectic audience: baby-boomers, hipsters, punk rockers, people with gray hair and with hair colors not normally found in nature, teens with their parents, and, generally, the musically adventurous. A little of everyone except the faint of heart.

Otomo Yoshihide has been in the vanguard of electronic improvisation and punk music since the early 1980s, notably through his band Ground Zero. His music has been influenced by both Japanese popular music from World War II and by ethnomusicological study, especially the evolution of Chinese musical instruments during the Chinese Cultural Revolution. Some of his earlier works included extreme use of sampling (the use of pre-existing recorded music, modified to serve new purposes).

The hour-long concert was divided into three sections (or, perhaps, three different improvised works) played with only the briefest of pauses between them. Yoshihide played a well-worn electric guitar, with a portable stand-alone amplifier/speaker and an array of foot controllers. Besides a standard guitar pick, he used a variety of devices to play upon the strings and the entire body of the guitar, notably a U-shaped metal device that appeared to have a partially smooth edge as well as another surface that was more serrated. Yoshihide used this device for a wide variety of techniques, including strumming, banging, and scraping and sawing with the serrated edge. Other times he drew a violin bow across the strings. With the guitar knobs he subtly altered pitches and harmonic overtones, and with the controllers he morphed the instrument’s sound into other synthesized instruments, often bell-like.

The first segment of the concert, about 30 minutes, was an exploration of texture, with low-pitched notes as way markers. Sometimes there were jazz-inflected tunes. The sound was mostly extremely loud (the proffered earplugs didn’t stand a chance), creating apocalyptically violent energy, especially during one of the segments exploiting audio feedback at assaultive volume.

The next part of the concert began as what might be called a slow movement, a more subtle exploration of pitch on a synthesized flute sound, but with increased upper overtones. A section at lower pitches was interspersed with a melody and a few chords. The improvisation gradually evolved into a minimalist punk rock riff, rhythmically adventurous and contrapuntally intricate, building in speed, volume, and pitch. It was viscerally hypnotic, as if we were being beaten by the shock waves of a huge, unending tsunami of sound. The sudden ending was as shocking as the music itself. The segment was fifteen minutes long, taking the audience to its limits of endurance.

The final segment was more loosely organized and improvisatory, with moments approaching lyricism suddenly destroyed by violence aimed at the guitar, including pounding on notes with the metallic U-shaped device. A variety of other bits of metal were attached to the guitar, in the style of John Cage’s prepared pianos, thus altering the sounds to become even more shriekingly aggressive. But in the end, the concert concluded quietly.

In contrast to most musicians who treat their instruments with respect bordering on reverence, Otomo Yoshihide pushed and abused his guitar to its breaking point. He also tested the stamina of his audience. The results were unsettling, but often riveting, and almost no one left before the end.

Published on ClevelandClassical.com May 16, 2016.

END_OF_DOCUMENT_TOKEN_TO_BE_REPLACED

Supported by engagingly, yet simple staging by Cara Consilvio, a well-prepared cast of singers told the archetypal story of Cinderella with charm and flair. Framing the production was  a sparse but colorful set and wonderful lighting by Dave Brooks. END_OF_DOCUMENT_TOKEN_TO_BE_REPLACED