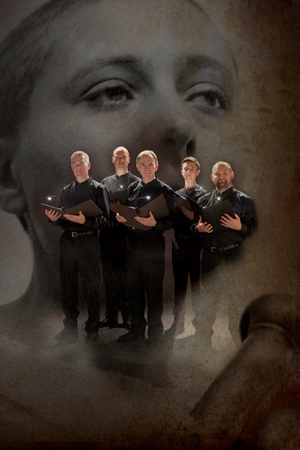 Carl Theodor Dreyer’s 1928 silent film Jeanne d’Arc’s Lidelse og Død, (“Joan of Arc’s Suffering and Death,” also more commonly known as The Passion of Joan of Arc or La Passion de Jeanne d’Arc) is considered by film historians to be one of the most significant movies of all time for its advanced editing techniques and the indelible performance of Renée Maria Falconetti in the title role. The screenplay is based on the transcripts of the church trial that convicted Joan of heresy and punished her by burning at the stake in 1431 during the Hundred Years’ War between France and England.

Dreyer (who died in 1968) did not commission an authoritative musical score for The Passion of Joan of Arc, particularly since the film was subjected over time to numerous cuts and censorship based on the politics of the presenting nation. The director’s original version, for decades thought to be lost, was located accidentally in 1981 in a mental asylum in Norway.

Over the years there have been many documented scores, both by classical music composers and rock/experimental music groups. One of the latest to take up the challenge is the British-based early music vocal ensemble Orlando Consort (Matthew Venner, countertenor, Mark Dobell and Angus Smith, tenors, Donald Greig, baritone, and Robert Macdonald, bass), who created a new score based on music from the time of Joan of Arc and presented it at the Cleveland Museum of Art on Wednesday, April 6. It was an imaginative and well-researched collection of music, and performing it was a remarkable exercise in stamina: the group sang for most of the film’s 96-minute running time, completely unaccompanied.

The musical selections are both sacred and secular, including chant, motets, fauxbourdon, chanted reading of texts, and the famous Agincourt Carol. Some of the better-known composers include John Dunstaple, Guillaume Dufay, and Gilles Binchois, with a host of less familiar names. (The Orlando Consort has posted a detailed scene breakdown and set list  on their website.) In his informative program note, baritone Donald Greig speculates as to whether Joan herself might have heard any of this music, since she attended sung Mass regularly in Orléans, Troyes, and Blois. The truth is, of course, unknowable with the available documentary evidence.

In the end, the final product of this brilliant idea was disappointing, partly for musical reasons and partly because of the genius of Dreyer’s film. The best film scores amplify the action, usually subconsciously, with the music almost disappearing. Here the score and the film seemed to be in competition with each other. The Orlando Consort has carefully explained the connection of their musical choices to the action of the movie, but it came across more as an intellectual exercise than an emotional experience. I found myself playing a mental game of “What does this music mean here?” — which would have been anathema to a typical film score composer. And despite varying the voicing of the performances, the musical texture had a sameness after a while. Excerpts from this score would, however, make a fantastic thematic concert program.

Ironically, another factor detracting from this performance was the sheer power of Renée Maria Falconetti’s portrayal of Joan of Arc. Dreyer’s intense close-ups cut from Joan’s face to the grotesque prosecutor Pierre Cauchon (played by Eugène Silvain), to the other clergy and judges and back. The camera often shoots from below, creating a claustrophobic, surreal atmosphere. The understated, 15th-century music could not support the emotions of events like the horror of Joan’s final burning at the stake.

Despite these reservations, this brilliant experiment was well worth the effort. The Orlando Consort should be invited to return to Cleveland for a performance in which attention can be focused completely on them.

END_OF_DOCUMENT_TOKEN_TO_BE_REPLACED

Although it wasn’t the original plan to go online last weekend for the final round of the James Stroud Classical Guitar Competition, moving to a digital format suited the event well. Young performers Aytahn Benavi, Patricia Hernandez, Ian Tubbs, and Eric Wang played in the intimate setting of their own homes, giving everyone who tuned in a front row seat. END_OF_DOCUMENT_TOKEN_TO_BE_REPLACED

END_OF_DOCUMENT_TOKEN_TO_BE_REPLACED

Joining a long list of arrangers, Parker Ramsay has now transcribed the Variations for the modern pedal harp, an instrument for which he holds a master’s degree from Juilliard, in addition to a degree in history from Cambridge University, plus a master’s in historical performance (organ and harpsichord) and an artist diploma (organ) from Oberlin. END_OF_DOCUMENT_TOKEN_TO_BE_REPLACED