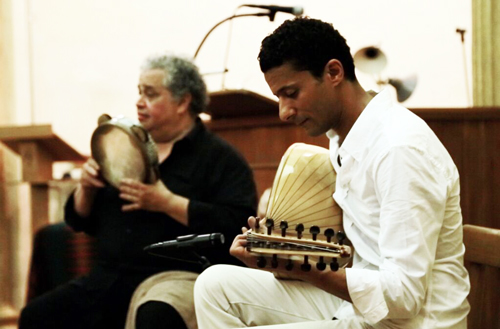 Nearly every culture has gone through a period of time when art, literature, and music have flourished,  periods which are often referred to as a Golden Age. Egyptian music experienced its Golden Age during the last third of the nineteenth century through the 1940s. Today this period is known as the Nahda era.

On Wednesday, April 27 at 7:30 pm in Gartner Auditorium, the Cleveland Museum of Art will present Tarek Abdallah (oud and compositions) and Adel Shams El-Din (riqq) in a concert featuring music from the duo’s recent recording titled Wasla. The performance is presented in conjunction with CMA’s centennial exhibition Pharaoh: King of Ancient Egypt.

During a telephone interview Tarek Abdallah explained that wasla is a type of Egyptian musical suite that combines different Arab traditions like North African nuba and Syrian fasl that were popular during Egypt’s Golden Age.

“I’m interested in this period because it was musically very rich. The musicians played modal music and they practiced improvisation,” Abdallah said. “It was not only the Golden Age of music but also of sound recordings. By 1940 there were hundreds and hundreds of 78s and those recordings caused advancements in instrumental music as well.”

Although Abdallah did not start playing oud until he was 19 years old, once he began, he took to the instrument quickly, earning his undergraduate degree from the Arab Oud House of Cairo. In 2009, he earned his master’s in musicology at the University Lumière Lyon 2 in France, where he is currently working on his Ph.D. His thesis is titled Virtuosity in the Art of Oud in the Twentieth Century.

“I’m collaborating with a foundation based in Lebanon called The Foundation for Arab Music Archiving Research. They have a wonderful library with something like 9,000 discs from Egypt, Turkey, Iraq, Morocco, and Yemen. We’ve just released an album of music recorded between 1921 and 1957 by the great oud player and composer Hammod Samdi. He died 50 years ago, but I’d call him the king of the oud. It’s a double album with a booklet in three languages.”

Abdallah said that the Golden Age is a period that most people know very little about, even those from Arab countries. “We had an  interruption in our musical history due to what happened after 1952, when there was a lot of transformation in society. People don’t know how many musical traditions the oud has because they don’t distinguish between folk music, art music, and popular music. People just call it all Arabic music and be done with it, no matter which period or tradition it came from.”

Abdallah is amused by one misconception people have about Arabic music. “When we talk about the music, people always imagine the belly dancer,” he said laughing. “I like belly dancing, but there’s more to the music than that. I find it funny when people say things like, ‘What, no belly dancer?’ But when they do, I just smile.”

When asked about his post Ph.D. plans he said that he hopes to have time to rest. “I need more time for music, to compose and play. Working on the doctorate has meant I’ve had to separate the musician from the musicologist.”

END_OF_DOCUMENT_TOKEN_TO_BE_REPLACED

Rodgers & Hammerstein’s Cinderella was originally produced for television in 1957 — seven years after the animated Disney film was released — and starred Julie Andrews. According to the Rodgers & Hammerstein website, it was viewed by over 100 million people. END_OF_DOCUMENT_TOKEN_TO_BE_REPLACED

The story line has its origin in an 1855 play and an 1842 farce that Thornton Wilder mined for his 1938 play The Merchant of Yonkers. When that turned out to be a flop, in 1954 Wilder made the crucial decision to re-center the show around the character of the legendary marriage broker Dolly Gallagher Levi and renamed it The Matchmaker. END_OF_DOCUMENT_TOKEN_TO_BE_REPLACED

The Dodero Center for the Performing Arts at the Gilmore Academy in Gates Mills is one feature of an impressive campus. The auditorium is shallow, the stage is deep, and the ensemble played without a shell. Throughout the program, the sound, especially in instruments’ lower registers, tended to disappear. END_OF_DOCUMENT_TOKEN_TO_BE_REPLACED