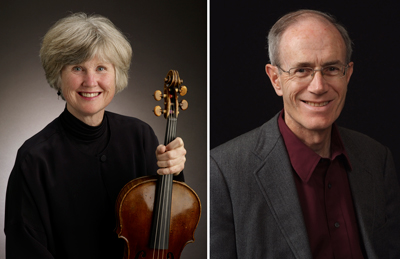 Since its founding, the Contemporary Youth Orchestra has given world premieres of over two hundred works, and this weekend’s concert is no exception. On Sunday, December 7 at 7:00 pm in Waetjen Auditorium at Cleveland State University, CYO will begin its twentieth anniversary season with a concert honoring composer Bernard Rands.

The program will include Rands’ London Serenade and Danza Petrificada as well as the world premiere of his Music for Liza and the Contemporary Youth Orchestra: Theme for CYO. Richard Hill and Chris Barber’s Concerto for Jazz Trombone and Orchestra will feature CYO concerto competition winner Rachel Waterbury as soloist.

The evening will also present the world premiere of Stefan Podell’s Concerto for Two Violas and Orchestra featuring Lynne Ramsey, First Assistant Principal Viola of The Cleveland Orchestra, and Jeffrey Irvine, Fynette H. Kulas Professor of Viola at the Cleveland Institute of Music.

Ramsey and Irvine first became involved with CYO when their daughter Hannah was a member of the orchestra. Although she has since graduated and is now attending Earlham College, Ramsey and Irvine agree that because she had such a wonderful experience in CYO, they wanted to stay involved.

“We’re just so impressed,” Irvine said during a conference call. “Liza started the organization herself, and has turned it into an amazing educational and fun experience for the kids.” “She is so imaginative,” Ramsey added, “to come up with the idea of not just playing classical music written by the old dead guys, but to also play movie music and rock music. She’s just a ball of energy.” And because of their admiration for Grossman and the work she does with CYO, when she approached Ramsey and Irvine with the idea of commissioning a concerto for them, they said they were delighted to take her up on the offer.

Irvine described the concerto as modern but accessible. “There are tonal centers and wonderful melodies, but there are some challenging sections too.” Some challenging sections indeed. Ramsey recalled the first time she looked at the cadenza. “I thought, my goodness, how am I going to learn this? It jumps around everywhere. But now it’s fine.” How does she describe the piece? “I remember working on the first movement, and I e-mailed Stefan and told him that I feel like a viola hero because the tune is so heroic. But that’s what I feel like when I play it.”

They are in agreement that Stefan Podell has done a great job of making both solo parts of equal importance and are impressed with the way he has addressed the challenges that are inherent in writing for the viola. “One of the difficult things for the viola as a soloist with orchestra, or in this case two violas with orchestra, is the balance issue between the orchestra and us,” Irvine said. “We’re not as loud as a violin, and Stefan has dealt with that through the use of dynamic markings. When he listens to the rehearsal I’m sure he will deal with this even further.”

“I agree,” Ramsey added, “it’s really difficult to balance with an orchestra. The viola plays in the middle register, so we could just blend right in rather than being a soloist, especially when the orchestration is colorful and romantic.”

Balance issues aside, both violists agree that the concerto has been a lot of fun to learn and they are certain the audience will have fun listening to it on Sunday.

At the end of the conversation I asked them how they balance their lives as a couple who are also professional violists. “We’ve made it work for 33 years,” Irvine answered. “33 and a half,” Ramsey quickly interjected. “Lynne has concentrated more on the orchestral part of our careers and I’ve been more on the teaching side, although we’ve each done a little bit of everything,” Irvine pointed out. “Sometimes when we’re rehearsing duos we have some little conflicts but we manage to resolve them.” “You know how opposites attract,” Ramsey added, “well, we definitely have opposite rehearsing styles. I don’t want to rehearse, and he wants to rehearse a lot, so we have to figure out a way to do a medium amount. It’s funny that way.”

END_OF_DOCUMENT_TOKEN_TO_BE_REPLACED

The strings-only work by Berg has made relatively frequent appearances on the Orchestra’s programs. In 2021, the musicians recorded it for the In Focus series, and it appeared again on last year’s European tour. Friday’s rendition maintained the group’s characteristic light and effortless playing, each section blending as much as possible to echo the work’s original form as a string quartet. At fifteen minutes total, the piece is quite short, but the dense encoded musical meanings require some extra-attentive listening. Splitting up the three movements ensured that each one could be appreciated on its own. END_OF_DOCUMENT_TOKEN_TO_BE_REPLACED