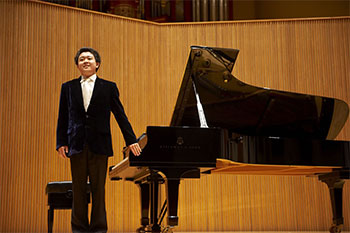 My first introduction to the 2010 Cooper Competitors was during the concerto rounds — mere 15 or 20 minute encounters with eleven young pianists playing single movements of their concerto repertory, which gave only a limited glimpse at their individual musical personalities.

Wednesday evening’s solo finals presented each of the six remaining competitors with a 30-minute opportunity to strut their pianistic stuff not only to the jury and the live audience in Warner Concert Hall at the Oberlin Conservatory, but to a wider audience listening in on WCLV, 104.9 FM or via the station’s Internet feed. The long evening started at 8:00 straight up, and the last note was played as midnight approached.

This particular trial by fire required a lot of mental strength as well as keyboard stamina. The program listed five or six pieces for each performer, but the judges would decide which excerpts or whole works would be played and in what order — and the competitors would receive their instructions only moments before taking the stage. Talk about the need to be prepared!

George Li (14, from Lexington, MA) drew the short straw and went first with Haydn’s Sonata in C, Chopin’s Andante Spianato and Grand Polonaise Brilliante and Liszt’s Hungarian Rhapsody No. 2. Charmingly attired in tux with white sox, Li gave a sprightly and well articulated account of the Haydn, shaped the Chopin nicely, tossing off formidable runs in the Polonaise with insouciance, and brought a wild, improvisatory spirit to the Liszt, even while deftly controlling his touch, producing fine contrasts in color and tone. His long tremolos turned audience heads. The rainstorm which broke out in mid-piece only added to the excitement.

Anna Han (also 14, from Chandler, AZ) was assigned four diverse works: Beethoven’s Sonata in E-flat, op. 31/3 (first movement), Liszt’s arrangement of Isolde’s Liebestod, Ondine from Ravel’s Gaspard de la nuit and Brahms’ Variations on a Theme by Paganini. Her Beethoven was a bit more serious than the music suggests, but the Liebestod was appropriately dramatic and overwrought. Han switched gears and created a lovely sonic atmosphere in the Ravel and successfully brought her formidable technique to bear on the flashy Brahms variations. Impressive.

Sahun Hong (16, from Fort Worth, TX) was given four works: Beethoven’s Sonata in d, op. 31/2 (‘Tempest’), Ravel’s Sonatine, Schumann’s In der Nacht (Fantasiestücke) and Liszt’s 11th Hungarian Rhapsody. Hong invoked some stormy weather in the Beethoven, even if there were occasional patches of fog from over-pedaling. He set up a beautiful, easy ambiance in the second movement of the Ravel (contrasting nicely with the first) and the finale was brilliant and skillfully paced. Clear dynamic contrasts and attention to inner voices marked his energetic performance of ‘Night’, whose ending he enthusiastically hammered home. The Liszt was simply thrilling.

A fifteen minute intermission gave the audience (and the jury) a well-needed stretch, then we were back on the air for part two.

John Chen (16, from Virginia) was dealt only three works, but two of them were piano pieces on steriods. Beginning with the first movement of Beethoven’s ‘Hammerklavier’ Sonata and ending with Liszt’s Don Juan Fantasy, Chen relaxed in between with a French entremet: Debussy’s Clair de Lune (Suite Bergamesque). Chen has deep reserves of pianistic strength which must have been at least a bit depleted by the end of his half hour. Beethoven began hugely and continued in that vein, though Chen found opportunities to vary his touch and color. Debussy provided a complete change of mood. Here, Chen produced a lovely, restrained and expressive tone, though his tempos seemed more brisk than reflective. Except for its Don Giovanni quotations, the Liszt is, quite frankly, one of the most vapidly bombastic works in the whole of the 19th century repertory. Chen played it with commitment, pacing it well, creating nice contrasts and untangling complicated textures. His technique is quite astonishing.

The youngest competitor, Tristan Teo (13, from Vancouver, B.C.) proposed one of the most interesting repertory lists of the competition, and the jury selected three delightful pieces for him to put across tonight right at the point when ears were beginning to be full of notes and needed a change. Teo began with a stylish, strong and clear performance of Mozart’s Sonata in c, went on to produce a characterful and charming reading of Schumann’s Abegg Variations that was both strong of finger and light of texture, and ended with a completely ravishing finale: Gershwin’s Rhapsody in Blue, in a brisk and eloquent version sans orchestra. Teo looks like he’s completely enjoying himself at the keyboard, and his engaging playing was a special pleasure to hear.

Kate Liu (16, Chicago, IL) drew the graveyard shift as the last of the six competitors. She began playing around 11:15, but commanded and held the audience’s attention with strongly profiled and intensely presented accounts of the first movement of Beethoven’s ‘Appassionata’ Sonata, Chopin’s E-flat Nocturne, a selection from Ravel’s Gaspard de la Nuit and another huge Liszt piece, the Rigoletto Concert Paraphrase. She apparently saw the Beethoven through the lens of Liszt (massive contrasts, extreme color changes from very dark to very light, resounding bass notes), but gave us characteristic readings of the Chopin and Ravel, always playing with strong voicings and rich tone.

After Liu’s set, the jury retired to select its choice of finalists for the Friday evening finals with The Cleveland Orchestra, and to name the fourth, fifth and sixth place winners. Meanwhile, the audience voted by ballot for its favorite contestant. It’s only possible to predict to a point who the winners will be — there are always surprises at the end.

END_OF_DOCUMENT_TOKEN_TO_BE_REPLACED

Rodgers & Hammerstein’s Cinderella was originally produced for television in 1957 — seven years after the animated Disney film was released — and starred Julie Andrews. According to the Rodgers & Hammerstein website, it was viewed by over 100 million people. END_OF_DOCUMENT_TOKEN_TO_BE_REPLACED

The story line has its origin in an 1855 play and an 1842 farce that Thornton Wilder mined for his 1938 play The Merchant of Yonkers. When that turned out to be a flop, in 1954 Wilder made the crucial decision to re-center the show around the character of the legendary marriage broker Dolly Gallagher Levi and renamed it The Matchmaker. END_OF_DOCUMENT_TOKEN_TO_BE_REPLACED

The Dodero Center for the Performing Arts at the Gilmore Academy in Gates Mills is one feature of an impressive campus. The auditorium is shallow, the stage is deep, and the ensemble played without a shell. Throughout the program, the sound, especially in instruments’ lower registers, tended to disappear. END_OF_DOCUMENT_TOKEN_TO_BE_REPLACED