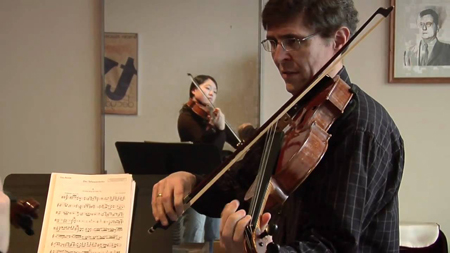 As summer music festivals go, Credo doesn’t quite mesh with most people’s idea of music camp. Founded in 1999 in Woodstock, Illinois by Peter Slowik and Karen Armbrust, Credo combines an intensive study of music and performance with the ideal of Christian love to promote a holistic learning experience for students ages thirteen to twenty-three. Fostering personal growth in addition to musicianship is the aim here, and this is perhaps best summarized in Credo’s mission statement, “Develop the Gift, Acknowledge the Source, Respond with Service.”

Now, sixteen years later, Credo hosts annual string and piano programs in Oberlin, Chicago, and, for the last two years, in Sydney, Australia. The Oberlin festival will run from Sunday, June 28 through Saturday, July 18, and it will feature regular student and faculty chamber music performances. (For details, see the Credo calendar). From July 20 to 25, the next stage of Credo’s summer programming will spotlight the first-ever Credo Flute symposium alongside the traditional Prelude Chicago for ages eleven to eighteen.

Advanced students in the Oberlin and Flute programs have been selected to perform in this year’s Brandenburg Project, a presentation of all six of Bach’s famous concerti in Symphony Center, Chicago on July 24 and in Reinberger Chamber Hall at Severance Hall, Cleveland at 7:00 pm on July 26. I recently caught up with artistic director Peter Slowik to discuss the Brandenburg performances and Credo’s plans for the future.

“This is the second time we’ve programmed the Brandenburgs,” Slowik said. “The first time was in 2000, and it’s exciting to be able to cycle back around to something as an organization. These are truly amazing pieces — speaking as an educator, they’re like a treatise on how to write a concerto grosso, or how to master baroque performance style. They’re full of such fresh inspiration, and Bach fuses the French, Italian, and German styles into these amazing concoctions. They’re unlike any other pieces I’ve ever encountered. The diversity of instrumentation is amazing — the second features solos for trumpet, oboe, flute, and violin. Whoever thought of writing for that group? But he pulled it off.”

In past years, the Oberlin festival has culminated in a performance with a full orchestra in Severance Hall. The Brandenburg Project is replacing the orchestral performance this season. “We wanted to repeat this concert on account of its success in 2000,” Slowik said. “It involves a much smaller orchestra, which makes our mission of sharing the Credo ethos with more people more economically feasible.” 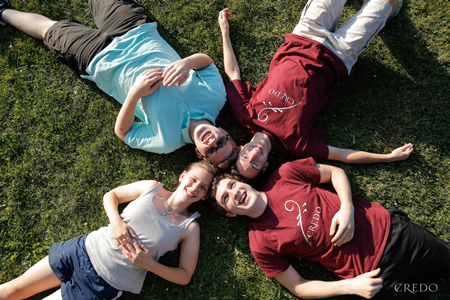 The roster comprises Credo students and alumni joined by guest performers Wesley Hall (continuo), Kevin Gupana and Natasha Keating (oboe), Daniel Taubenheim (trumpet), and Valerie Whitney (horn). How were the students selected for this performance? “The flutists (Hannah Hammel, Douglas DeVries, and Daniel Carlo) are coming from all over the country and were picked based on their applications to the flute program,” said Slowik. “This is Credo Flute’s first year, and it’s actually oversubscribed!

“Other musicians were chosen based on a combination of their auditions and recommendations from their teachers,” he continued. “You’re not going to find a virtuoso high trumpet player on every street corner!”

Violinists Alyssa Adamec, Maria Beltavski, Lauren Lai, and Ann Yu, violists Thomas Cooper and Corey Worely, and horn player Valerie Sly make up the rest of the ensemble. “The string players are all students in the Credo Oberlin program, and they’ll act as mentors at Prelude Chicago where they’ll be coaching the younger students,” said Slowik.

Credo continues to expand its operations because, as Slowik says, “good musicians don’t have boundaries. We’d like to engage with people wherever possible. One of our long-term goals is to have Credo programming available within 500 miles of everybody in the US. But as with any expansion, the ideas and the need outpace our ability to react to them.

“It’s like when you exercise — the results show up three weeks later,” Slowik continued. “What we’re doing now is a result of what we’ve been thinking about and working on for quite some time. We have plans for the future, and every time we have success with expansion it shows us that we can do more. The dream is to be of service to everyone who approaches music with our attitude. As our alumni go out and become leaders in the field, we are hoping that they’ll propagate these kinds of activities.

“Credo is also seeing a fair number of “grand-students” as former attendees start their own studios and send their students along to Credo, which is really fun,” Slowik continued. “And some our alumni have gone on to start their own Credo-like organizations to suit whatever their local needs are. We provide them with any guidance or support they may ask for as they venture out on their own.”

What have recent Credo alumni gone on to achieve? “We have one who just won an Avery Fisher Career grant, one just won a position in the Saint Paul Chamber Orchestra, and another was just named principal cello of the Indianapolis Symphony,” said Slowik. “We started fifteen years ago with a bunch of twelve-year-olds, and now we have this generation of people who are ready to hit the world. As they begin working in professional ensembles, we hope they’ll bring the attitude that we cultivate — to synthesize music with service activity wherever they are.”

Community service is central to all of Credo’s activities. “On the first Thursday of the Oberlin program, students go out and perform at a hospice center, or a hospital, or the Boys and Girls Club of Cleveland,” said Slowik. “Or they volunteer at a food bank or clean up a highway — we’ve taken on an adopt-a-highway project. And that’s the day that the tone for the next few weeks is really established.” 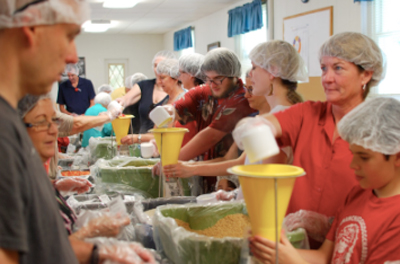 What are some of the changes Slowik anticipates this season? “Every so often, we see a major student turnover,” he responded. “We had a bunch of kids that came for four, five, or six summers, and they have graduated on to other programs. Now we have a brand new generation of Credo students, and there are more newbies around than usual. Of course, there’s still a cadre of people who maintain the culture, and they help define what Credo is for the newer students.”

What’s in store for future years? “We want to continue to expand the summer festivals, and we’re looking to program bigger things in Cleveland and other places around the country. We’re working hard to maintain the level and size of the program that we’ve had in the past. It’s nice to make a big noise!”

Jackson began the program with a recitation of Langston Hughes’ poem “Helen Keller” — the first of five poems by Hughes that served as interludes between each piece on the first half. END_OF_DOCUMENT_TOKEN_TO_BE_REPLACED

Pianos with pins and tape on strings, a bass drum and tam tam, crotales, Almglocken, and vibes. Microphones were hooked up all around the instruments. The feed was sent to speakers around the room. Lighting designer Nicholas Houfek hung incandescent globes over the arrangement of instruments from thin black wires stretching across the beams. END_OF_DOCUMENT_TOKEN_TO_BE_REPLACED

From the podium, Elim Chan set an ambitious tone for the evening. The rising star conductor, here in her Cleveland Orchestra debut, has a commanding style, and every twist and turn in Saturday’s performance tracked closely with her baton. END_OF_DOCUMENT_TOKEN_TO_BE_REPLACED