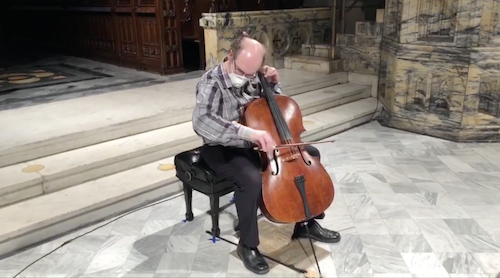 TODAY’S EVENTS ONLINE AND ON THE AIRWAVES:

Also at 7, the second session in Round One of Piano Cleveland’s Virtu(al)oso competition features 20-minute performances by Lin Ye, Kevin Ahfat, Julian Miles Trevelyan, Francesco Granata, and Kiron Atom Tellian, pre-recorded at Steinway Galleries in the U.S., Europe, and China.

The MET’s free opera stream tonight at 7:30 offers a 2017 performance of Dvořák’s Rusalka.

Check the Concert Listings for details.

Cleveland Classical Guitar Society announced this morning that its entire 2020 fall International Series will be presented online, beginning with a concert by Berta Rojas on August 15. Its annual Showcase Concert will be live-streamed from the Maltz Performing Arts Center on September 12, as will performances on October 17 and November 21. The Society’s season announcement will also be made online this Saturday at 7:30 pm in a 20-minute video, followed by a 9:00 pm EDT live stream performance by Thomas Flippin in partnership with Austin Classical Guitar. Registration for the free stream from Austin is required.

On this date in 1886, Hungarian composer and piano virtuoso Franz Liszt died in Bayreuth, Germany at the age of 74. The 19th-century classical equivalent of a 20th-century rock star, Liszt’s solo piano performances gave rise to such pan-European fame that the poet Heinrich Heine characterized audience acclaim as “Lisztomania.” The composer ended his career as “the Abbé Liszt” after taking minor orders in the Catholic Church.

END_OF_DOCUMENT_TOKEN_TO_BE_REPLACED

Composer John Harbison has done it all. His numerous awards include a MacArthur Fellowship and a Pulitzer Prize. He has written works for many of America’s leading musical organizations and has served as composer in residence with the Pittsburgh Symphony and the Los Angeles Philharmonic. His catalogue includes three operas, seven symphonies, twelve concerti, a ballet, six string quartets, numerous chamber works, and a large body of sacred music. On her latest CD, Late Air — Music by John Harbison, soprano and Oberlin voice professor Kendra Colton reminds us that the celebrated composer has a special talent for writing art songs — she also proves herself to be a sensitive interpreter of them. END_OF_DOCUMENT_TOKEN_TO_BE_REPLACED

END_OF_DOCUMENT_TOKEN_TO_BE_REPLACED

We begin with the world premiere recording of Okeanos, Bernd Richard Deutsch’s concerto for organ and orchestra, featuring Paul Jacobs as soloist. The title refers not only to the Titan of Greek mythology, but also “to an idea of immense (and sometimes unfathomable) greatness and breadth, which conjures up in my mind the thought of the organ,” as Deutsch writes in his notes. END_OF_DOCUMENT_TOKEN_TO_BE_REPLACED