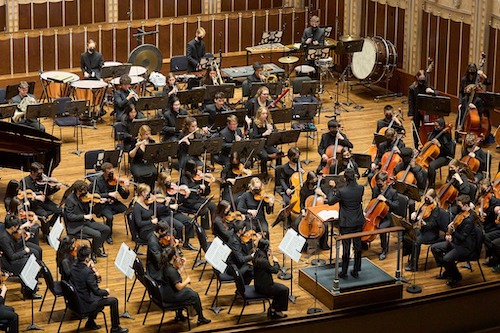 FOR THE YOUNG ONES:

Applications for the Cleveland Orchestra Youth Orchestra’s 2022-23 season are now open. Admire the photo by Roger Mastroianni above, then click here for more information.

And the Canton Symphony’s educational program “SymphonyLand Strings” — which tells the story of Crunch the Shy Dinosaur while teaching about string instruments — is now available to watch. Register here. It’s designed for children ages 3-6, but, I mean…a dinosaur? That’s shy? That maybe likes music? Potentially checks a lot of boxes. (And because it’s virtual, interested adults need not go the route of Steve Buscemi’s character in NBC’s 30 Rock, in a flashback to his days infiltrating high schools as an undercover cop.) 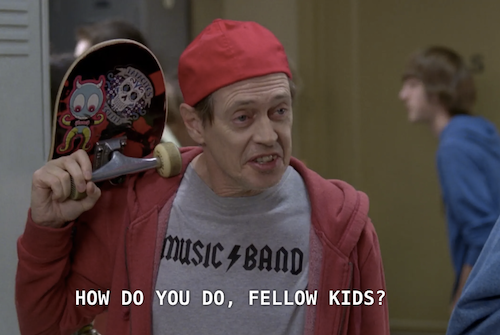 TODAY’S LISTENING, FOR YOU, AND FOR MR. KIBBLES

The Cleveland Orchestra’s podcast, On A Personal Note, continues with a two-part episode exploring “one of the most unusual and memorable performances” in the history of the ensemble. That was in January 2018, when one soloist for Haydn’s The Seasons fell ill — and then another. Listen to “Change of Seasons” here, from “The Scramble” to “The Golda Touch.”

And an article from Animal Wellness Magazine explores the benefits music may offer to dogs and cats, an idea with particular relevance in stressful environments such as shelters and veterinary hospitals. Perhaps those concepts and applications are a draw for you, or perhaps you don’t want to deny yourself the opportunity to see a picture of a dog wearing headphones. Either way, click here.

Anniversaries on this particular date in classical music history go on and on — the birth of Mozart (Salzburg, 1756) and the death of Verdi (age 87 in Milan, 1901) just scratch the surface.

Given that January 27 is International Holocaust Remembrance Day — chosen for the date in 1945 when the Soviet army liberated the Auschwitz and Birkenau concentration camps — we’ll turn our focus to Czech pianist and composer Gideon Klein, who died on that same date in 1945 at age 25. 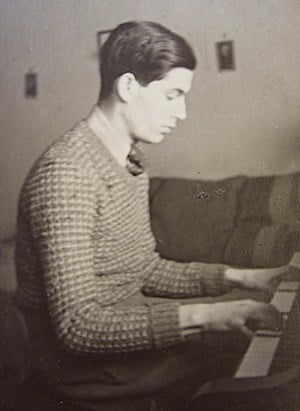 Beginning in Klein’s late teens, anti-Semitism stood firmly in the way of furthering his education and his career. After the Nazi occupation of what was then Czechoslavakia, institutions of higher learning were closed, and Klein was forced to discontinue his studies in philosophy and musicology at Charles University — fortunately he had already completed his studies in piano at the Prague Conservatory. Offered a scholarship at the Royal Academy of Music in London, that was also out of the question due to Nazi laws on emigration. And when Jewish musicians could no longer publicly perform — or have their works performed — he took on the alias of Karel Vranek, or played in private homes.

In 1941 he was deported to Terezín, where he became an important part of the camp’s cultural life — which at first operated in secret, and later under the sanctioning of the Nazis for the purposes of propaganda at this “model ghetto.” As a pianist, he performed works of Mozart, Beethoven, Schumann, Brahms, Suk, Janáček, Schoenberg, Scriabin, and Bach at Terezín, often in programs repeated up to eleven times due to popular demand.

Among several pieces that Klein composed while detained there is the 1944 String Trio. As Lucy Miller Murray writes in Chamber Music: An Intensive Guide for Listeners, you can hear in that work “not only the circumstances under which it was written, but also Klein’s musical gifts that reflected his Czech origins and his admiration of the adventurous Second Viennese School led by Arnold Schoenberg.”

Click here to watch a 2015 performance by students of the Colburn School. The lengthy second-movement Lento, a set of variations on the Moravian folk song The Kneždub Tower, begins at 2:45, and is known to be particularly striking.

In October of 1944, nine days after completing the Trio, Klein was moved to Auschwitz, then to the coal-mining labor camp Fürstengrube, where he died under unclear circumstances. A girlfriend of his at Terezín, Irma Semtzka, had been entrusted with the scores he had written there. After she survived the war, she delivered the manuscripts to the composer’s sister Eliska Kleinova — a survivor of Auschwitz herself — who in 1946 went on to arrange the first complete concert of the music of her brother, Gideon Klein.

You can read more about music under the Nazi regime here from the U.S. Holocaust Memorial Museum.

The cimbalom was the feature of the show, an instrument capable of taking on many personas. Its performer, Chester Englander, has shaped his career around the instrument, and has inspired composers to write more repertoire for it, some of which was presented on the program. END_OF_DOCUMENT_TOKEN_TO_BE_REPLACED

You wouldn’t expect that acoustic from a glance at the nave, which is wide and long, but not especially lofty. But when I guest conducted a local amateur choir and professional orchestra in Beethoven’s Mass in C there a few years back, during the first rehearsal we released the final chord of the “Gloria” and listened in astonishment for the next several seconds. The sound continued to roll down the space like the big wave that surfers dream about. END_OF_DOCUMENT_TOKEN_TO_BE_REPLACED