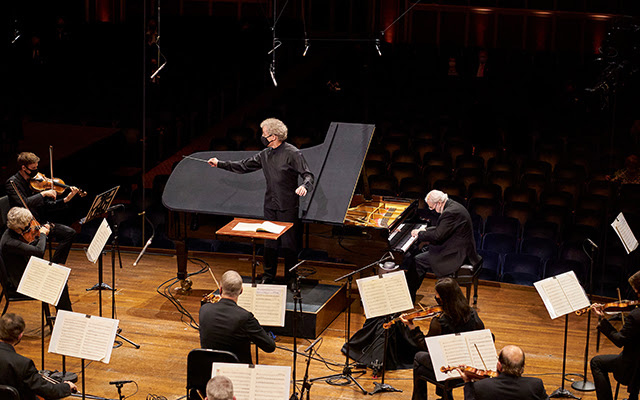 The Cleveland Orchestra’s “In Focus” series continues tonight with Episode 3. Pianist Emanuel Ax joins Franz Welser-Möst and the ensemble in Haydn’s D-Major Concerto, and the Orchestra fills out the hour-long program with Bartók’s Divertimento for Strings.

Also released today, the latest episode in the Orchestra’s “On a Personal Note” podcast series relates the story of the ill-fated performances of Haydn’s oratorio The Seasons, in January of 2018, when more than one soloist called in sick. “Change of Seasons” takes two episodes to tell the tale. Listen to Part 1, “The Scramble,” here.

This evening, the second of two programs in the “Black Reflections” series jointly hosted by the Oberlin Conservatory and the New World Symphony takes up the topic, “A Just Future for Black Musicians.” Christian McBride hosts the free Zoom webinar, for which you’ll need to register.

And Cleveland Brass Works is next up on the Silver Hall Series, streamed live from the Maltz Performing Arts Center.

Some works immediately come to mind to celebrate three of those anniversaries.

Although Walter Piston was a celebrated academic who wrote four theoretical works and taught at Harvard from 1926 until 1960, he started his musical career playing piano in dance bands and saxophone in the Navy during World War I. One of his most engaging orchestral works is the suite he extracted from his ballet score, The Incredible Flutist. Watch the video of a performance by the Spanish Radio and Television Orchestra, Carlos Kalmar conducting, recorded live in April, 2015 at the Teatro Monumental, Madrid. Note the tango in 5/4 time (and the barking dog!) Cleveland Orchestra fans might have caught the ensemble’s archived performance on a recent WCLV broadcast.

Górecki came to prominence outside his native Poland only in the 1990s, chiefly through a recording of his Third Symphony, subtitled “Symphony of Sorrowful Songs,” that commemorated the victims of the Holocaust and featured soprano Dawn Upshaw. It sold more than a million copies worldwide. Listen to the work here in the recording with Upshaw and the London Sinfonietta, David Zinman, conducting.

Speaking of commercial successes, English composer John Tavener achieved wide renown for his religious works, many of which reflected his conversion to Orthodox Christianity in 1977. Among his best-sellers: The Protecting Veil (recorded by cellist Steven Isserlis), Song for Athene (sung at the end of the funeral for Princess Diana in Westminster Abbey in 1997), and the haunting little setting of William Blake’s The Lamb, inspired by his 3-year-old nephew and premiered at the 1982 King’s College Festival of Nine Lessons and Carols. Watch Quire Cleveland perform The Lamb at Trinity Cathedral in December, 2013.

The Choir of Trinity College Cambridge included The Lamb in a 2013 tribute to Tavener, along with his Mother of God, Today the Virgin, Funeral Ikos, and Song for Athene. Stephen Layton conducted the ensemble at the European Festival of Church Music in Schwäbisch Gmünd, Germany in July 2013. Watch here.

The cimbalom was the feature of the show, an instrument capable of taking on many personas. Its performer, Chester Englander, has shaped his career around the instrument, and has inspired composers to write more repertoire for it, some of which was presented on the program. END_OF_DOCUMENT_TOKEN_TO_BE_REPLACED

You wouldn’t expect that acoustic from a glance at the nave, which is wide and long, but not especially lofty. But when I guest conducted a local amateur choir and professional orchestra in Beethoven’s Mass in C there a few years back, during the first rehearsal we released the final chord of the “Gloria” and listened in astonishment for the next several seconds. The sound continued to roll down the space like the big wave that surfers dream about. END_OF_DOCUMENT_TOKEN_TO_BE_REPLACED