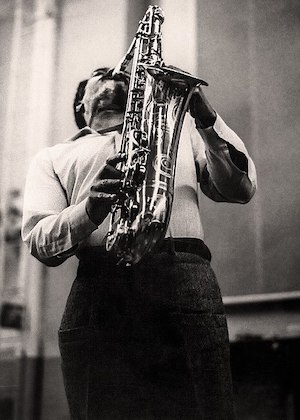 •A job opening at Firelands, an invitation from Western Reserve Chorale, and auditions for Canton Youth Symphonies

The second day of the Cooper International Violin Competition includes sessions at 2:30 pm and 7:30 pm at Warner Concert Hall in Oberlin. Go and watch for free.

Two more free events take place at 7:00 pm. You can catch saxophone/woodwind quartet Iron Toys in classical, jazz, and avant-garde music at Cain Park in a presentation by the Local 4 Music Fund. Or you can join in Mozart’s Requiem as part of West Shore Chorale’s Summer Sing at Rocky River Memorial Hall. All are welcome, scores will be provided, and donations are appreciated.

Meanwhile, Western Reserve Chorale invites interested singers to join in when rehearsals for next season begin on September 6. No audition necessary, though choral experience and music-reading ability are a plus. Rehearsals take place Tuesday evenings at Church of the Gesu in University Heights, with virtual options for those who cannot attend in person. Click here for more info.

An article in JazzTimes profiles New Ghosts, the Cleveland organization devoted to presenting experimental jazz in the spirit of Cleveland-born avant-garde saxophonist Albert Ayler (pictured above). As Jackson Sinnenberg writes, New Ghosts has always had a policy that “even if there is no audience, the bands presented will be sure to receive an agreed-upon amount of money,” as well as lodging at the home of New Ghosts co-founder Matt Laferty.

“These are people who make art that is worthy of the greatest respect,” Laferty told JazzTimes. “They make art that speaks to their own personal visions of the world, and it’s hard to get people to pay attention to those kinds of personal visions. My goal is to give them a comfortable, reliable place to make their art happen and to take away some of the risk of being a creative musician in this world — just for a night, anyway.” Read here.

Two births and an auspicious premiere appear in today’s dates to remember. 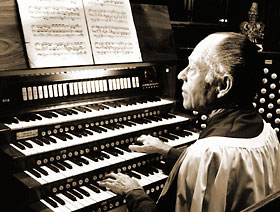 On August 16, 1909, American organist and conductor Paul Callaway was born in Atlanta, IL. Except for his period of service as a band director in the U.S., Callaway served as organist and choirmaster at Washington Cathedral for 38 years between 1939 and 1977, during which he founded the Cathedral Choral Society in 1941, and the Opera Society of Washington (now Washington National Opera) in 1956.

Click here to hear the Cathedral Choir sing Callaway’s anthem An Hymne of Heavenly Love, and here to listen to him play Eugène Gigout’s Grand Choeur Dialogué on the Cathedral organ, an instrument that enjoyed an expansion to 189 ranks of pipes to allow it to fill the vast space created by the eventual completion of the nave.

An amusing story about that organ: the pedalboard was situated on a pneumatic platform that could be instantaneously raised and lowered to accommodate both Callaway, who was short of stature, and his assistant, Richard Wayne Dirksen, who was tall. Years ago, I arrived on a Saturday afternoon to practice for a recital the next day to find a note indicating that a gusset had blown out and couldn’t be fixed until Saturday evening. I ended up practicing in the indoor equivalent of a Nor’easter — even the loudest registrations were obliterated by the wind noise. It was interesting, to say the least, to hear the instrument for the first time on Sunday. 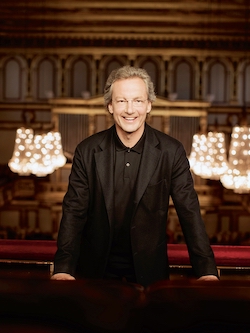 Cleveland Orchestra Music Director Franz Welser-Möst was born in Linz, Austria, on this date in 1960. He took up conducting after a debilitating automobile accident forced an end to his violin career, and after a series of orchestral and operatic posts, was tapped for Cleveland beginning with the 2002-2003 season.

Welser-Möst’s book, From Silence, first published in Austria in July 2020 as Als ich die Stille fand, and now available in English, chronicles the ups and downs of his career, and “remains a bestseller in the German language in 2021,” according to a Cleveland Orchestra press release. “Reviewers highlighted the book’s eclectic combination of autobiography, philosophical musings, and behind-the-scenes musical industry insight.”

And the debut we mentioned was the inaugural performance of Richard Strauss’ Olympische Hymn, first heard on this date in 1936 at the opening ceremony of the XI Olympiad in Berlin. The games that year, the first to be televised, were famously co-opted by Adolf Hitler and the Nazis to promote their agenda, but also proved to be a triumph for Black American athlete Jesse Owens, who won four gold medals.

Listen to Strauss conducting his Hymn here, with additional documentary footage about the composer’s later years. And this video about Owens and the 1936 games suggests the complexity of reporting on historical events. (At 1:40, it also contains an amusing eyewitness recollection by U.S. distance runner Louis Zamperubi of the release of 25,000 pigeons during the opening ceremonies as experienced by spectators.)