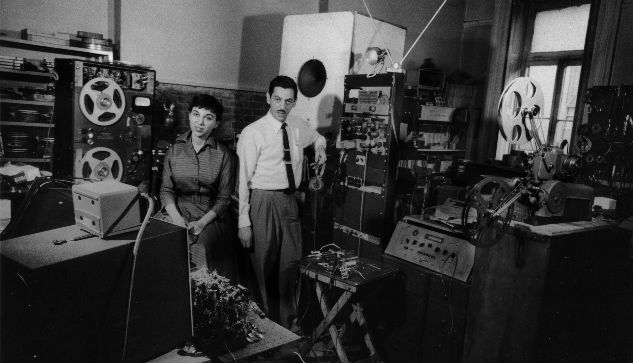 Aside from French composer and organist Maurice Duruflé, who died on this date in 1986, the Midwest is well-represented in the annals of June 16th music history, particularly when it comes to electronic music.

An early pioneer in that field was Bebe Barron, born in Minneapolis in 1925. Having been gifted a tape recorder as a wedding gift, she and her husband Louis Barron (together, above) delved into musique concréte, in which recorded sounds are often modified and assembled together. Their work brought them attention from the avant-garde community, including a collaboration with John Cage.

Turning to Hollywood, the couple went on to compose the first fully-electronic film score, for Forbidden Planet (1956). Audiences were reportedly stunned by what they heard, applauding wildly for one particular scene in which the music brings to life a spaceship landing on a foreign planet. As you’d expect, the visuals don’t exactly hold up today, but the music is still fascinating to hear — watch the minute-long landing scene here.

Bebe Barron’s last composition before her passing in 2008 was titled Mixed Emotions (2000). It came about after a residency at the University of California, Santa Barbara, and captures a similar feeling to her earlier work, but with the benefit of updated technology. Listen here.

And from Cleveland we have composer James K. Randall, born in 1929, who became increasingly interested in electronic music after he began teaching at Princeton University in the late 1950s. To my taste, his work is most interesting when it combines electronic and acoustic sounds, like in the second section of the haunting Mudgett: Monologues by a Mass Murderer. Listen here beginning at the 3:08 mark, where soprano Melinda Kessler enters the picture.

Les Délices will be featured on WCLV’s Ovations at 8:00 pm with highlights from “Women of Genius,” a program that premiered in March. Details here.

Outside the area, one virtual event of interest comes to us from Marin Alsop and the Baltimore Symphony, who will explore the music of jazz pianist and composer James P. Johnson. View here and on demand through June.

The latest video in the Cleveland Classical Guitar Society’s Creative Fusion Series brings together music for solo guitar (written and performed by Anastasia Sonaranda) with choreography and dance (by Susana Weingarten Evert). Sonaranda has often been inspired by nature, and this piece, Cuyahoga Weeping, is no exception. Watch here.

Burning River Baroque is requesting poetry submissions by June 23 for possible inclusion in the ensemble’s live-streamed concert on June 26, “Elements Worth Fighting For,” themed around climate change. Read more about that program here.

The Cleveland Opera will join the Cleveland Ballet for an outdoor, in-person performance on July 18 at the Italian Cultural Garden. The socially distanced audience is limited to 250 seats. Get tickets here, or watch free online from July 25-31.

The Firelands Symphony will give a free outdoor concert on July 4 at Jackson Street Pier in Sandusky. “An Independence Day Pops Celebration” will be followed by fireworks. More information here.

And the Canton Symphony continues its Orchestrating Change discussion series with Season 2, Episode 2: “Inclusion at Every Level,” featuring guest Ana Abrantes, Director of Education at the Sphinx Organization. Watch here.

END_OF_DOCUMENT_TOKEN_TO_BE_REPLACED

What was that strange din coming over the live feed from Ludwig Recital Hall on Friday evening, July 23, as the Miami String Quartet filed onstage to play the third faculty recital of the Kent Blossom Music Festival? Accustomed as we were during the pandemic ban on live audiences to hearing the sound of no hands clapping, it was both startling and thrilling to witness a large crowd putting their hands together to welcome one of the Festival’s perennial favorites back for an in-person performance. END_OF_DOCUMENT_TOKEN_TO_BE_REPLACED

Practical reasons aside, there aren’t many ensembles who can put together an all-Mozart evening as elegantly as The Cleveland Orchestra. END_OF_DOCUMENT_TOKEN_TO_BE_REPLACED