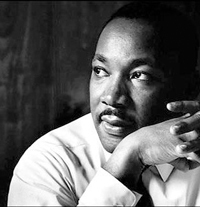 You’re reading this after noon on Friday, so the 12:15 pm McGaffin Carillon concert is already old news. But you can still enjoy George Leggiero’s performance (including a Beatles tune) via YouTube, on demand here.

The Cleveland Orchestra is on duty at Severance Music Center Friday at 7:30 and Saturday at 8 with two symphonic standards (Mozart’s No. 40 and Dvořák’s No. 8) separated by Bern Richard Deutsch’s Intensity. Franz Welser-Möst is at the helm.

On Saturday at 1, the MET Opera — who have yet to cancel a performance since the house reopened — bring you Mozart’s The Marriage of Figaro over WCLV.

This is Martin Luther King Jr, weekend, but thanks to COVID-19, Saturday’s annual MLK Memorial Concert by musicians from the Music Settlement and The Cleveland Orchestra’s annual MLK Celebration Concert will be presented online. The Settlement event will be streamed live from the Bop Stop, while the Cleveland Orchestra will make its 2018 Martin Luther King, Jr. Celebration concert available for free on Adella from January 17 through February 28. The Orchestra’s annual Community Day won’t happen this year. And Apollo’s Fire has created a six-video playlist to celebrate MLK Day.

At 4 pm Sunday, Cleveland Orchestra assistant concertmaster Stephen Tavani will be featured in the Brahms Concerto with the Youngstown Symphony. Guest conductor Miriam Burns will lead Bartók’s Roumanian Folk Dances and Beethoven’s Symphony No. 7 to fill out the program in the Ford Family Recital Hall at Youngstown’s DeYor Center.

Apollo’s Fire has decided to reschedule its cycle of “Lift Every Voice” concerts from February 4-6 to August 5-7. Ticket holders have been contacted with rebooking directions.

Multiple sources report that Nuremburg instrument maker Johann Christoph Denner invented a new instrument called the clarinet on January 14, 1690 — a claim that recalls that Irish Archbishop’s assertion that God created the earth on October 23, 4004 B.C., at nine o’clock in the morning. In fact, Denner essentially added two keys to the chalmeau,  launching one of the most versatile instrument families to be incorporated into the developing symphony orchestra, and making possible such pieces as Mozart’s Clarinet Concerto.

Speaking of Mozart, a century and a decade later, Ludwig Köchel, who created the first chronological catalogue of Mozart’s works and assigned them KV (“Köchel Verzeichnis”) numbers, was born in Lower Austria on January 14, 1800. He was also a skilled botanist — not a bad hobby for someone who sorts musical works out into categories.

Other individuals who contributed to the history and theory of music include Heinrich Schenker (who died on January 14, 1868, leaving us the tools to strip Mahler Symphonies and Schubert songs down to their essences), organist, Bach scholar, medical missionary, and humanitarian Albert Schweitzer (born on January 14, 1875 in Alsace), and — mentioned with some reservations — Anton Schindler (who died on January 16, 1795), the undependable biographer of Beethoven, always ready to make things up when needed.

Living figures with birthdays this weekend include conductor Nic McGegan (born January 14, 1950,  mezzo-soprano Marilyn Horne (January 16, 1934). And although they’re no longer with us, we should take note of the birthday of organbuilder E.M. Skinner (January 15 in Clarion, PA), and wish R.I.P. to conductor Arturo Toscanini (departed on January 16, 1957) and Dutch harpichordist and conductor Gustav Leonhardt (who died on January 16, 2012).

Three first performances pop up in the weekend’s calendar.

Alban Berg’s Wozzeck premiered on January 14, 1924 in Berlin, and Ravel’s Piano Concerto in G was first heard in Paris on the same date in 1932. And under very different circumstances, Olivier Messiaen’s Quartet for the End of Time was introduced to the world on January 15, 1941 in the Stalag 8A prisoner camp in Gurlitz, Silesia.

Here are ChamberFest Cleveland videos of the Mozart Concerto with Franklin Cohen (from 2015), and the Messiaen Quartet (with Franklin Cohen, clarinet,Yura Lee, violin, Gabriel Cabezas, cello, and Orion Weiss, piano) from 2013. And an alternately relaxed and supercharged account of the Ravel Concerto with Martha Argerich and the Symphoniker Hamburg led by Sylvain Cambreling in February of last year.