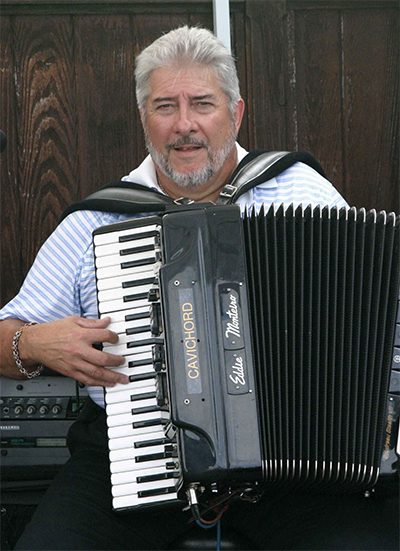 Monteiro’s harmonies for Johnny Mandel’s The Shadow of Your Smile were exquisite in this soulful version. For Lullaby of Birdland, Monteiro approximated the vibraphone sound from composer George Shearing’s original quintet, including octave doublings. He and Bacha exchanged phrases captivatingly.

Monteiro played his own version of Charlie Parker’s Scrapple from the Apple, a great dialogue with Bacha. The improvised version of Autumn Leaves also sparkled, especially in the fast bebop variation.

Rhode Islander Cory Pesaturo joined in for a delightful trio version of George Gershwin’s A Foggy Day in London Town. He alternated lead choruses with Monteiro, as Bacha continued his sensitive support.

Pesaturo, known for his astonishing technique, raced through a scintillating klezmer improvisation, though the ornamentation was a bit over the top. His presentation of the six-beat La Fiesta was also amazingly fast. The rendition of “Winter” from The Four Seasons was impressive, but a little like Vivaldi on steroids.

The young Matthias Matzke, from a very small town near Stuttgart, Germany, has surprisingly sophisticated digital musical ideas. His All Is Hell That Ends Well featured film-music qualities and intriguing quasi-orchestral sounds.

An improvisation on a piece by his teacher Hans Günther Kölz included an intriguing stylistic mix, enlivened by exquisite percussion sounds and background digital loops.

Joseph Natoli’s opening set included his own Nostalgique, which transformed a Czerny piano exercise into a soulful jazz waltz.

Two Natoli compositions highlighted a duo set played by Natoli and Soloway. “Deborah’s Theme” from Once Upon A Time in America is a cinematic tribute to film composer Ennio Morricone, and a sensitive arrangement of Arlen’s Over the Rainbow was a memorial for Natoli’s late nephew. The audience responded warmly to all the performances, and the organizers should be proud.

Speaking with the conductor by phone in Cleveland this past Wednesday, I began our conversation by telling him that I had a wonderful conversation with Stefan Jackiw, who was singing his praises (read the article here). Especially how sensitive the conductor’s ear is with regards to color, which Jackiw noted is quite important in the concerto’s passacaglia. END_OF_DOCUMENT_TOKEN_TO_BE_REPLACED

The music isn’t easy to play, either. Over the course of two hours, all of the musicians brought fantastic focus to the unrelenting tricky rhythms and countless layers of parts, all of which require a high level of individual responsibility. Even in the moments of calm, the accompaniment remains perpetually unsettled. Adams — who made a sprightly presence on the podium — combines minimalist, repeating motives in gradual layers, which eventually become so dense they overwhelm the senses. Lisa Wong deserves special mention for her thorough preparation of the Cleveland Orchestra Chorus, as does Jennifer Rozsa for the Children’s Chorus, which made a brief but memorable appearance in the last few minutes. END_OF_DOCUMENT_TOKEN_TO_BE_REPLACED

Warner was a fitting choice not just symbolically, but also sonically. The combination of Baroque strings, theorbo, harpsichord, and organ created a nice blend and balance, allowing the opportunity for softer instruments to stand out. In Johann Rosenmüller’s Sonata à 5 in g, Doug Balliett’s violone pizzicatos resonated beautifully, and in Johann Heinrich Schmelzer’s Sonata in d, harpsichordist Elliot Figg became an equal player in the texture with his clever improvisations. The slight exception was Joshua Stauffer on theorbo — despite the instrument’s big physical presence on stage, he received little time in the spotlight. END_OF_DOCUMENT_TOKEN_TO_BE_REPLACED