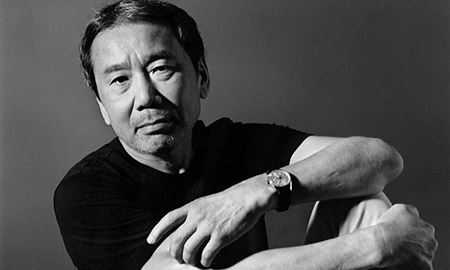 ENCORE Chamber Music’s June 13 program, “Sparked by Murakami,” held at the Dodero Center for Performing Arts, explored the narrative potential of chamber music, both through dramatic music conveying characters and story, and through different artistic disciplines that created a hybrid storytelling experience.

Pianist Shuai Wang began the program with Debussy’s “Arabesque No. 1” (from Deux Arabesques) and Jardins sous la pluie (“Gardens in the Rain”), capturing a mood inspired by nature with a hint of the ethereal.

In the Arabesque, Wang’s playing was steady and even in tempo, articulations, and dynamics, and her dramatic gestures were extraordinarily impactful in their subtlety and intentionality.

From the tranquility of the Arabesque, Wang moved without pause into Jardins, a wildly rhythmic portrayal of the pitter-patter of rain. Its excitement is also achieved through bright colors and rapid, descending patterns that avoid a consistent downbeat and tonal center. Wang’s sense of imagery, her commanding subtlety, and her level of control created the perfect portrayal of a rainy garden.

Immediately afterward, actor Martinique Mims gave a dramatic reading from Haruki Murakami’s Norwegian Wood, a reflection on death that, like the Debussy pieces, contains elements of natural imagery. Wang followed with more Debussy — the Clair de Lune — skillfully interpreting each iteration of the familiar melody, giving every note its own intention without jeopardizing momentum or drama.

The performance was also uniquely impactful in the context of Norwegian Wood. It took on a speech-like quality of its own, each phrase delivered like stream-of-consciousness, inviting the audience to connect to it as both narrative and music.

In a similar way, Mims’ reading of Murakami’s The Wind-Up Bird Chronicle informed Wang’s performances of Robert Schumann’s The Bird as Prophet and Träumerei. Both were characterized by moments of silence and accelerating energy, just like the delivery of the monologue.

Next came the second movement of Schubert’s “Death and the Maiden” Quartet, featuring violinists Jinjoo Cho and Dorothy Ro, violist Abigail Rojansky, and cellist Dan McDonough. Due to international travel restrictions, Ro and Rojansky had only stepped in recently, but despite the personnel changes, the group played with complete artistic cohesion, telling a clear story through perfectly synchronized, expressive gestures.

Cellist Kyle Price and violist Eric Wong joined the quartet to conclude the program with Schoenberg’s Verklärte Nacht. The dramatic range from all six players was striking. They powerfully conveyed shame and anxiety early on in the piece, and hopeful happiness in the end, but still within the context of the previous emotions — relief and joy still carried a certain weight. As the title “Transfigured Night” suggests, the story has evolved rather than completely resolved.

Tickets and event calendar for the 2021 ENCORE Music & Ideas Festival can be found here.