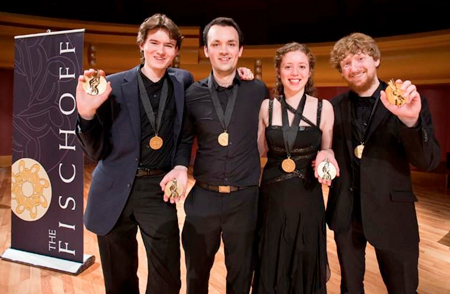 It’s always a pleasure to hear performances by young musicians who are at the beginning stage of their professional careers. This was the case on Friday, June 30 when ENCORE Chamber Music presented an outstanding recital by the Milton String Quartet in the Tudor House at Gilmour Academy.

Winners of the Grand Prize and the Senior String Division Gold Medal at the 2017 Fischoff Competition, the Milton are also ENCORE’s first Fellowship Quartet. Formed in 2015 at Schulich School of Music of McGill University, violinists Roman Fraser and Maithéna Girault, violist Evan Robinson, and cellist Joshua Morris performed with the maturity associated with veteran ensembles, never falling victim to youthful exuberance. They also demonstrated a deep understanding of the program’s three musical scores.

Opening with Joseph Haydn’s Quartet in F, Op. 77, No. 2, the Milton produced a well-blended sound, bringing out all the humor that exists inside the work’s four movements — especially during the Minuet. The concluding Vivace was appropriately grand.

It was difficult to believe that they had only begun to rehearse Béla Bartók’s Quartet No. 3 in C# after arriving at ENCORE — their interpretation sounded as though they had been living with the piece for years. The thorny work is full of sudden mood shifts, extended techniques, and a variety of pizzicatos, all of which they played with aplomb.

The evening concluded with Felix Mendelssohn’s magical Quartet No. 4 in e. Here the Milton were in their element, achieving the lighthearted flair that the music beckons. Scherzo, reminiscent of the Composer’s scherzo from A Midsummer Night’s Dream, sparkled as the players exchanged musical lines. During the final Presto, the Quartet filled the room with a full-bodied sound.

Judging from this hearing, the Milton Quartet is an ensemble to watch. Hopefully they will return to the Cleveland area soon.

It might seem that there’s not a lot left to discover after three decades of experience with the Red Priest’s charming and evocative score, but this performance boasted a secret weapon: the young Spanish violinist Francisco Fullana, now the Orchestra’s artist-in-residence, whose affecting personality and easy virtuosity raised the solo part a quantum leap above the merely extraordinary. END_OF_DOCUMENT_TOKEN_TO_BE_REPLACED

END_OF_DOCUMENT_TOKEN_TO_BE_REPLACED

The Cleveland Orchestra’s second performance of the new season on Sunday afternoon, October 17 at the newly renamed Mandel Hall at Severance Music Center was just such an occasion. If the ensemble’s return to public concerts under the baton of Franz Welser-Möst wasn’t enough reason to light a bonfire, the Cleveland debut of a new work written for one of the Orchestra’s most popular soloists, and the swan song of one of its longest-serving members added extra fuel to the celebration. END_OF_DOCUMENT_TOKEN_TO_BE_REPLACED