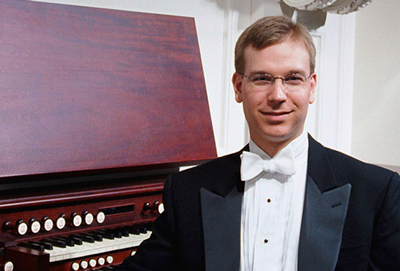 There are few major composers of organ music whose complete works for the instrument can be combined into a single concert of reasonable length. Maurice Duruflé, virtuoso French organist active from the 1930s almost until his death in 1986, is such a composer.

Concert organist, former organist at Washington’s National Cathedral, and Oberlin alumnus Erik Wm. Suter played all of Duruflé’s original solo works on Tuesday, February 9 at Oberlin’s Finney Chapel on the school’s French Romantic-inspired Fisk organ. Suter played to a slim crowd, due to snowy weather and treacherous roads, but the hardy souls who made it were treated to fine playing.

Maurice Duruflé was inspired by the French Impressionist composers, but equally by Gregorian chant, which was having a resurgence in the 1920s and ‘30s when Duruflé was a student under the influence of organist-composer Charles Tournemire. That composer’s vast compositional output for organ stands in stark contrast to Duruflé’s mere handful of pieces, yet each of Duruflé’s works is a gem, painstakingly crafted and revised with great care, sometimes years later. The concert, lasting less than 90 minutes, was played without intermission, a daunting task for which Erik Wm. Suter was well-prepared.

Suter did not perform the works chronologically but in a pleasing recital order. He opened with Fugue sur le Thème du Carillon des Heures de la Cathédral de Soissons, Op. 12, from 1962. The theme consists of eight descending notes set in a minor key. The piece follows the rules of fugue, including a majestic stretto at the end, in which the theme is “piled up” in several voices and appears simultaneously in long notes in the pedal, leading to a blazing conclusion. Suter’s reading was urgent, always pressing on, but not quite stepping over the line of being rushed.

The Prélude et Fugue sur le nom d’Alain, Op. 7, was composed as a tribute to Duruflé’s friend Jehan Alain, a brilliant composer who was killed in World War II. Duruflé spelled Alain’s name in musical notes, and the resulting theme forms the basis for a prelude and brilliant fugue that also incorporates the theme from Alain’s own Litanies. The prelude is a kind of scherzo; the fugue, in Suter’s commanding performance, built to a thrilling climax.

Duruflé’s Prélude, Adagio, et Choral Varié sur le thème du Veni Creator, Op. 4, is his homage to Charles Tournemire using the plainsong hymn for Pentecost. Arabesques of great fantasy on the flute stops form the prelude, and a lush Adagio never completely states the chant. Finally, a series of masterfully inventive contrapuntal variations fully reveal the plainsong, ending in a full-organ toccata. In its cohesion and technical achievement, this was Suter’s best playing of the evening.

Duruflé’s first published composition, the Scherzo, Op. 2, was also dedicated to Tournemire. Light, joyful, and influenced by Ravel, it sounds deceptively simple. Suter had its tricks well in hand.

The Suite pour Orgue, Op. 5, closed the program. Its ominous, cortège-like “Prélude” builds to a huge climax before dying out to an inconclusive-sounding end. The middle movement, “Sicilienne,” begins gently, resembling a French folk song, then continues to a series of increasingly complex variations, each more virtuosic than the last. A huge, dissonant “Toccata” closes the suite and ended the concert. Until recent years, performances of the Toccata were limited due to its great technical difficulty, but is now quite common on programs, perhaps too much so. Nonetheless, Erik Wm. Suter has the chops to do it justice, and it was a fine ending to an excellent performance.

“Mary’s Song” refers to the Magnificat (“My soul doth magnify the Lord”), sung by the soon-to-be mother of Jesus in response to the message the angel Gabriel delivered to her in the Gospel according to Luke. The text has been set countless times by composers in all eras, largely because the Magnificat is one of the invariable texts in the daily service of Vespers, as well as its Anglican relative, Choral Evensong. END_OF_DOCUMENT_TOKEN_TO_BE_REPLACED

Music director and conductor Daniel Meyer built his playlist around Cleveland themes and scenes. “Exploration CLE” made use of engaging selections from the classical canon and beyond that celebrated “what makes Cleveland so special.” Happily, he and his musicians avoided constructing a visual slide show, choosing to let the music speak for itself. END_OF_DOCUMENT_TOKEN_TO_BE_REPLACED

You could see the relationship at work on a practical level. Repertoire for two players at the same piano requires a certain choreography. There’s just one of each pedal to share, and the hand crossings left and right — which can be so fun to watch a soloist pull off — get more complicated when another person’s involved. At times, Pompa-Baldi drew a hand away from the keyboard and into his body, making room for Friscioni, and at the close of a few delicate phrases, the two were crouched together over the same final notes at one end of the instrument. END_OF_DOCUMENT_TOKEN_TO_BE_REPLACED