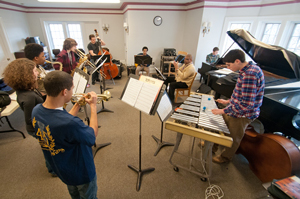 Last week Cuyahoga Arts & Culture (CAC) released new data demonstrating that public funding for arts and culture is having a positive impact on the residents of Cuyahoga County. The Report focuses on CAC’s work in strengthening community in Cuyahoga County, by Enriching community, Enhancing education and Contributing to our local economy. (A PDF of the Report to the Community is available here).

“Each year CAC publishes a report that helps to show the public how their investment is being spent, and that it’s a good investment,” says CAC’s executive director, Karen Gahl-Mills. “But what I take away from this particular report, is that [not only do] we have great statistics but now that we’ve been [funding organizations] since 2006, we also have some great stories to tell.” One story that is highlighted in the report is the Cleveland Music Settlement’s Jazz at the Settlement (JAMS) program.

Music Settlement President and CEO Charles Lawrence says that when CAC dollars first started coming to the Settlement, he had just joined the organization and was looking at ways to inject new energy into the school’s department of music. “I had just hired Eric Gould as the new head of the department of music and even though he is trained as a classical musician, his primary background was a jazz composer and musician. Eric felt that an American music jazz program would serve the organization very well in terms of reaching out to underserved communities as well as broadening the base of our offerings. I thought that was a great fit because while we certainly push for good musicianship, we’re really about making better people. So they may not end up being musicians, but rather bankers or bakers or even writers [laughing] and we’re fine with that.” Lawrence also points out that the mission of the Settlement is to serve the entire community regardless of their ability to pay.

Founded in 1912, the Music Settlement has had to find ways to change with the times. “They’ve gone from the Settlement house tradition to where they are today and the risks they’ve had to take and the things they’ve had to do in order to fund those risks,” Gahl-Mills points out. “The first time I met with Charles Lawrence he talked about how CAC money would allow them to experiment a little with what they needed to do to stay current. We find this is a very common sentiment with the organizations that are receiving public dollars. They know that they have to change with the times, so when there are some public dollars that come to the table as operating support it gives organizations a chance to make changes that will enable them to connect with the public in an even better way.”

We spoke to Charles Lawrence by telephone and asked him to tell us more about the Jazz at the Settlement program.

Mike Telin: Thanks so much for taking the time to talk and congratulations on the success of the program. But what were the challenges of getting it off the ground?

Charles Lawrence: Thanks, it was a real alignment of the stars. The JAM program seemed like a good fit but the problem is that it’s very hard to start a program like it because we knew that a significant amount of the population would be challenged to pay to kind of tuition that we were thinking of, and finding the faculty would be a challenge as well. 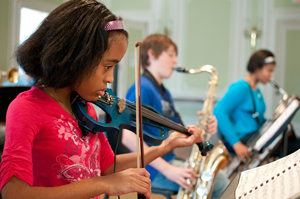 Eric Gould, who was the head of the department, had great connections in the jazz community and he said that he could bring in the best faculty around but we needed to make [the program] accessible to the community. So we designated some CAC dollars right off the bat toward supporting it, to sort of give it a boost when it first started. We matched those dollars with some endowed financial aid dollars that the Settlement had as well.

It was a really interesting model, sort of like the for-profit model in that we invested in a program before we had results. But we were confident that the program would grow and that we would get a mix of students that could pay tuition, partial tuition and people who could only pay very little. So the CAC was really critical in helping us to do what I call sort of an R&D approach were we actually invested ahead in a program that we thought would gain traction and grow, and it has worked out exactly that way.

MT: That is an interesting approach, but it has proven to be successful.

CL: The thing that is unique is that the program has actually changed our whole approach to music education. It’s sort of a back to the future program in that the kids come on Saturdays at 9:00 am and they stay until 1:00 pm.

When you and I were going to community music schools we were expected to take theory and to be involved in composition and ensembles. Now many education programs in community music centers are [all about] one-on-one instruction but we felt that it was critical for JAMS to be an immersion program, so again the cost was significant and CAC dollars allowed us to make [the program] available to folks who would normally not be able to afford it.

MT: Obviously this is the type of program the community wanted.

CL: The program just took off. The enrollment was strong from the very beginning and we found out very quickly that there was also a strong jazz culture in Cleveland that supported the program both at the instruction level and at the student level. It has become such an influential program that the kids themselves now market the program.

MT: Interesting — and word of mouth is the best advertising.

CL: It’s very hard to get teenagers [to come to] any program, but when they’re talking to their friends and telling them that they have to be here, you’ve got to be part of this, it really helps.

The other thing that happened is that because we had invested CAC dollars in the JAMS program, [in turn] the program attracted the attention of a very significant partner in the Berklee College of Music. They saw the commitment that we were making to the program and the depth of experience that we’re bringing to the kids and they agreed to partner with us as part of their Berklee City Music program. It’s a community-based program that brings curriculum to the kids. So part of that four-hour experience on Saturdays is to go to the computer lab and get the history of jazz from the distinguished faculty at Berklee.

[It was great to have] a high-level, visible partner very early in the process. So [CAC dollars] not only served the original intent, which was to broaden the impact of our curriculum and to do a better job of serving the underserved, which is what the Music Settlement is all about, but it has also changed our culture which is very exciting.

MT: How has it changed the culture?

CL: We are now aligning our immersion program in classical music with the JAMS program so the kids can join together. Our orchestra now [studies] improvisation, and the jazz and orchestra kids sit next to each other, so we actually now have an orchestra that has a rhythm section, a DJ, a vocalist and en entire string section. It’s changed the whole culture.

We absolutely have strong musicianship at the core of every program, and now some of our top string students can stand up and improvise as well as play off the page.

I’ll tell you something, this is really engaging the kids. It is very attractive to young people who want to have more of a world music experience and without the timing of the CAC dollars, we would not have been able to make this kind of jump and to move the department forward in a significant way.

MT: This is an amazing story and I need to do a follow-up. Is there anything else you’d like to add?

CL: The other outcome is that the kids are getting significant college scholarships. We received exciting news this week that one of our kids has now gotten a Presidential Scholarship to Berklee which means that everything is paid. Not just tuition, everything. And about a dozen kids have gotten scholarships to major music programs in the area, and this program is only five years old. As I said, It’s a real alignment of the stars.