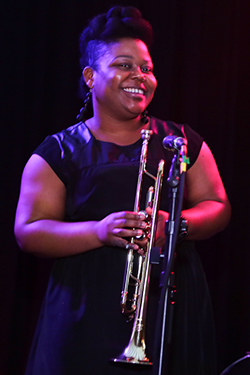 The mind behind the curation of the concert is trumpeter Theresa May, a native of Shaker Heights who performs with such groups as Mourning [A] BLKstar, Gabriel’s Horns, the Cleveland Brassworks, and the Cleveland Jazz Orchestra.

I reached the trumpeter by telephone and began by asking about the process of putting her ideas into action.

Theresa May: I was just telling my collaborators yesterday — everything that first came to mind, I went with, which I don’t normally do (laughs). And everything actually happened, so that’s really cool.

Jarrett Hoffman: In your bio on the fp Creative site, you write about being a black woman, and you point out the issues of representation in classical music. Did that play a part in your programming?

TM: Yes, I wanted to make sure that I incorporated music of black composers. I also wanted to make a point of performing composers who are still living. So first on the program is an unaccompanied trumpet piece by a black woman composer, Regina Harris Baiocchi. She’s based out of Chicago. I’m also featuring music by my friend Ahmed Alabaca, who’s an African American composer as well. I wanted to make sure that parts of myself were being represented, because I don’t have that luxury all the time when I perform.

JH: Let’s talk about some of the premieres, which include four by Alabaca. One of his new pieces was partly inspired by Rachmaninoff, and the title is Chant + Vocalise. So is the Rachmaninoff Vocalise involved in some way?

TM: The piece begins with an original, chantlike composition as the introduction to the Rachmaninoff, which Ahmed arranged for brass trio, voice, and piano — I was really excited about that. When we first started thinking about this program, I had just gotten my electronic pedals from EarthQuaker Devices, so I was trying out a bunch of stuff. And that version of Vocalise will include me playing flugelhorn with one of my electronic pedals.

JH: So you’ll be playing trumpet and flugelhorn throughout the program. Who’s joining you onstage?

TM: Megan Denman is on piano, Devin Roark is on bass trombone, Van Parker is on French horn, and Kyle Kidd is on vocals. And someone just hopped on — I needed a djembe player for a tune that Ahmed wrote, so Pete Saudek, who plays in Mourning [A] BLKstar, will be joining us on one piece.

JH: Tell me about the premiere by Buck McDaniel, I Want to Die While You Love Me, which closes the program.

TM: My whole thought about this concert is that I wanted to have fun making music with my friends. I wanted the last two pieces to be for everyone so we can have that really nice vibe that I always get when I play with my friends. I asked Buck to compose this for us, and it’s a beautiful piece — really strong and moving. Kyle Kidd will be singing the text of the poem [I Want to Die While You Love Me by Georgia Douglas Johnson].

JH: Let’s jump back to the solo trumpet piece by Regina Harris Baiocchi. I understand it has an element of staging, and that this performance will feature animation by Patrick Stoops.

TM: It begins offstage, and in the middle of the piece, I start to walk to center stage. I love this piece, but I’ve not usually been a fan of unaccompanied trumpet works. So when I was learning it, I wanted to add another aspect to the performance, and I thought of animation. I think I still feel a little bit naked as a performer when it’s just me playing trumpet.

So I sent Patrick audio of me playing the piece, and I asked him to just animate whatever he thought would be best for that. I did not give him any guidelines. It was the same with the composers — I just wanted them to write what they felt.

JH: One piece on the program is by a composer who’s no longer living: Richard Peaslee.

TM: It’s called Nightsongs. It’s such a beautiful piece, and I’ve never had an opportunity to perform it. It’s written for trumpet and flugelhorn with piano accompaniment. And the sound of it just fits with the rest of the program.

JH: Earlier you mentioned one of the groups you play in, Mourning [A] BLKstar, which released its third album last year. What would you say to introduce people to the band?

Jackson began the program with a recitation of Langston Hughes’ poem “Helen Keller” — the first of five poems by Hughes that served as interludes between each piece on the first half. END_OF_DOCUMENT_TOKEN_TO_BE_REPLACED

Pianos with pins and tape on strings, a bass drum and tam tam, crotales, Almglocken, and vibes. Microphones were hooked up all around the instruments. The feed was sent to speakers around the room. Lighting designer Nicholas Houfek hung incandescent globes over the arrangement of instruments from thin black wires stretching across the beams. END_OF_DOCUMENT_TOKEN_TO_BE_REPLACED

From the podium, Elim Chan set an ambitious tone for the evening. The rising star conductor, here in her Cleveland Orchestra debut, has a commanding style, and every twist and turn in Saturday’s performance tracked closely with her baton. END_OF_DOCUMENT_TOKEN_TO_BE_REPLACED