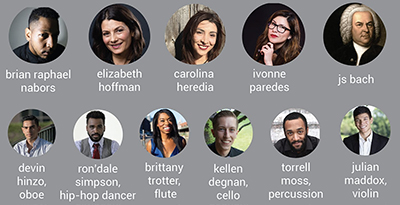 When I called Devin Hinzo at our appointed time we exchanged hellos: “I was just working on staging a dance for next week’s concert,” he told me. The thing is, Devin Hinzo is an oboist. But he’s also a person who likes all kinds of artistic disciplines and enjoys discovering ways for those disciplines to work together.

On Friday, November 2 Hinzo will launch his Fresh Perspectives series with a program titled “Then & Now: the evolution of tradition, at Lab Studios by Glo, a 5,000-square foot warehouse space in Cleveland’s Superior Arts District. The Art Gallery opens at 6:30 pm with dj white rims. The program, “Then & Now: the evolution of tradition,” featuring music for solo instrument + electronics including a new collaborative work for oboe, hip-hop dancer, and laptop begins at 7:30 pm. For more information visit the Fresh Perspectives Facebook page. A donation of $5 is suggested. RSVP here.

Hinzo, who serves as Glo’s Resident Artist and Music Programming Coordinator said that his goal for the project is “to create a dynamic experience for enjoying classical music and the arts. I’m also trying to reimagine the approach arts institutions use to curate and program diverse artists.”

The San Jose, California native said that he has wanted to create a project like Fresh Perspectives for a long time. “I did my undergraduate work at the New School in New York City. While I was there I developed relationships with collaborators outside of classical music — people like fashion designers and video artists. It opened my eyes to what is possible.” 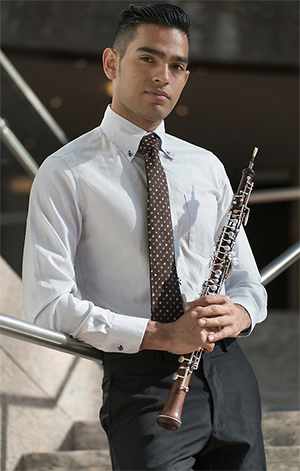 After growing tired of New York where he said he “didn’t have a voice and was working too hard for little return,” Hinzo decided to move to Cleveland and pursue his master’s at the Cleveland Institute of Music with Cleveland Orchestra principal oboe Frank Rosenwein. “He’s been very encouraging for me to go in this direction, Hinzo said. “He kept saying ‘you should stay in Cleveland — you could do some great things here.’”

I asked Devin Hinzo to say a few words about each of the composers’ works.

Brittany Trotter will be playing  Brian Raphael Nabors’ Énergie for flute and 2-channel electronics. Brian is finishing his DMA at the Cincinnati Conservatory.

Elizabeth Hoffman initiated development of the computer music program for the Music Department of the Arts and Sciences division of NYU twenty years ago. She had written a piece for oboe and electronics, and I asked her if it would work with a hip hop dancer. Ron’dale sent her some videos. But when we talked we decided to develop a new work. It’s based on a piece that Elizabeth did with an Irish pipe player — an improvisation with pipes and laptop. It’s all improvised and I’m trying to evoke the sounds of an Irish bagpipe which are different from Scottish pipes because the Irish instruments can produce chromatics. The piece doesn’t have a title as of yet.

Carolina Heredia is a new faculty member at University of Missouri, Columbia, and I was introduced to her works by friends in the JACK Quartet. The piece we’re playing on Friday is for solo instrument and electronics and is very operatic.

Ivonne Paredes is based in Brooklyn and I met her through some mutual friends. Fantasmagoria is a hypnotic piece for live electronics, glockenspiel (played with thimbles), and improvised percussion.

J.S. Bach’s music is part of the collaborative work for oboe and hip hop dancer — there’s an interlude that ties everything together. His music has a reputation for being stiff, but a lot of it stems from different types of dances. If you approach it from that perspective the music becomes more lively.

Winding down our conversation I asked Hinzo how he discovered Bach? “I think I saw something on YouTube. I was going to invite him to the concert but I didn’t know if he’d have the time — he’s very busy. He’s also old school and doesn’t respond to emails very quickly.”

Hinzo said that Fresh Perspectives is a different, fun way of presenting classical music, and he has enjoyed the collaborative process and people’s enthusiasm for the project. “A lot of things like lights and acoustic tiles have been donated, so it feels good that people are behind it. I’ve also worked closely with percussionist Justin Gunter. He’s the project director and has been very helpful.”