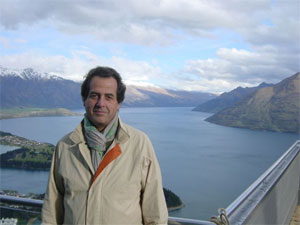 Jamey Haddad is in charge of programming world music for the second half of the Cleveland Orchestra’s new five-concert series ‘Fridays @ 7.’ We caught up with Jamey in New York while playing gigs for the Rock Hall Festivities, and asked him about his thoughts on why audience building initiatives such as the Fridays @ 7 are needed.

JH: First, I have to say it is a real honor to play in Severance Hall, which is the home of the Cleveland Orchestra.  For me it has never been anything but that, and in a perfect world they wouldn’t need to be saddled with becoming anything else simply because they are so magnificent. But at the same time, there is an interesting evolution of the planet, and the worlds of music. Some of the former patrons have moved on or died out, and some of the new blood in the city has not yet embraced the orchestra — and therefore doesn’t have the same affection for the orchestra and Severance Hall. So for them, and for me having just moved back to Cleveland, I would say wow, now that would be an interesting night. I could imagine some of my friends saying, well, I might have a problem with a two and a half hour program, but a one-hour program followed by something that had a little more casual feel to it would make for a beautiful night. So my challenge in programming the second half of the evening was to make sure people would feel they were not just having a sit down experience, but something they just wouldn’t experience somewhere else.

MT: Programming orchestral and world music on the same evening could seem as an unlikely pairing to some?

JH: My whole life has been about these amazing and unlikely collaborations either though former students, or with people who have invited me to participate around the planet. Their world is not formalized and so they are running around doing what ever they need to do to make their life in music work. In a way I’m from a situation that’s similar to what the orchestra is trying to do, and this seemed like a wonderful way to bring world music musicians together who should know about each other. More importantly, these are some of the best contemporary music groups, and like the Cleveland Orchestra approach their art from a very well informed body of work and tradition.

MT: On the 20th you will have the same group of musicians that performed on last year’s performance of Osvaldo Golijov’s “Azul” and at that performance, we were treated to a fantastic encore that included Alisa. I understand that she will be joining you after her performance of the Dvorak, and I wondering if we can expect more of what we heard that night, and will there be anything different?

JH: We only played one piece as the encore, [improvisations around the late Brazilian accordionist Sivica’s “Feira de Mangaio”] but between then and now, we’ve been practicing a few things. You know I’m always amazed at the response we get when we play that piece. I ‘m shocked that people like it. I would like them to like it but I’m always surprised that they like it as much as they do and I guess I attribute it to the willingness of Alisa to really put herself out there. We’ll again be joined by Dylan Moffitt, a CIM percussionist, and the Japanese percussionist Keita Ogawa and of course Michael Ward-Bergeman on the hyper-accordion [which he describes as “an acoustic accordion with extended range and expressive capabilities.”] Both of those guys were former students of mine at Berklee in my rhythm classes and world music ensemble.

I am also going to be bringing about 20 students from my world music classes at Oberlin and the Cleveland Institute of Music who will be providing the groves and feels off mic as kind of an accompaniment.

MT: It must be fun to perform with former students such as Michael.

JH: I didn’t get back in touch with Michael til about 10 years after he graduated. I said, I really want an accordion, and he said I haven’t played that since I was a kid. I said, man you should get that thing out. He had grown so much as a pianist over the years but somehow he was tuned up for it and then just went by evolution to the hyper-accordion thing, which was a great marriage. Then he hooked up with Osvaldo, and I don’t even know how that happened.

MT: What can we expect at the concert in January?

JH: A long time associate of mine, Mark Stewart, has a band called Polygraph Lounge. How do you describe what they do? It’s sort of a musical satire — in fact they usually pass out nose flutes to the audience. Its kind of like Frank Zappa meets Spike Jones meets Crosby Stills and Nash, meets Bach and Beethoven. They’re so well informed on all sorts of things. Check out their website, they’ve got a great one. It will be a big hit.

[We did check out their site www.polygraphlounge.com and it is great. We strongly recommend that you do too].

MT: We could not let a noted teacher and performer such as yourself get away without asking you about your thoughts on including the study of rhythm and improvisation in a classical music curriculum.

JH:  It does meet with resistance because it can be seen as challenging the tried and true tradition of teaching either European or American classical music. In the past students’ studies never included certain kinds of rhythmic section playing or performing chord changes over the American songbook of harmonic sequence. All of that information had been excluded from their education. If they’re not playing modal music, and if they could improvise at all, they surely will not be able to improvise over chord changes. Students need to be able to function in a rhythm section where they’re really responsible to play a groove or a feel and play improvisations on that feel and stay in the groove. Knowing all of this will surely serve students who choose to study rhythm and improvisation well as they go forward in their careers. It will cause them to be more self-directed. Instead of waiting around for the opportunity to play in a major orchestra, which in itself would be exciting, they will also be able to have a wonderful life being part of a group like Eighth Blackbird.

Teaching improvisation is all part of the evolution. I consider myself to be one of the foot soldiers ushering in what I can while also walking away with what I can steal from that world. I’ve been lucky enough to do that with Osvaldo.

MT: Thank you so much. Do you have any final thoughts?

JH: I consider myself to be a jazz musician first, and by virtue of always being totally puzzled by the rest of the world and the evolution of music I just dove in and tried not to sink over the past 30 years.