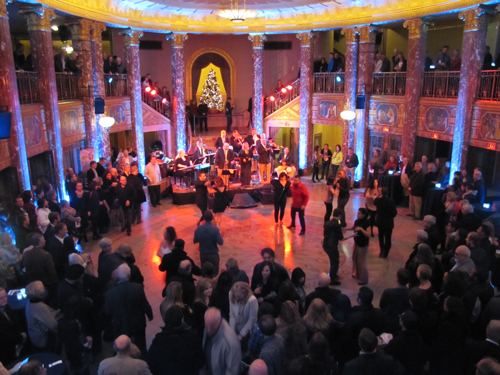 A party raged at Severance Hall Friday night. Everybody in the house — young and old — had their hands in the air and their bodies on the dance floor, the bartender tapping on bottle caps along to the music. No, this wasn’t during the performance by The Cleveland Orchestra — maybe someday. It was afterwards, in the majestic Grand Foyer, its golden ceiling and tall pillars overlooking a performance by the twelve-piece Latin jazz group Sammy DeLeón y su Orquesta, who invited listeners to take to the dance floor.

Talented local dancers were gradually joined by the rest of us. (In some cases they pulled people from the sidelines and taught them a few moves.) Some couples revolved closely, spinning, twirling, deft. Others were loosey-goosey — one older man seemed to chase and never quite catch his backpedaling partner. Meanwhile the music roared. “Oye Como Va” delighted dancers with its familiarity and a stunning keyboard solo by Jackie Warren. Tito Puente’s sunny “Mambo Gozon” made the December night shine.

It wasn’t the only jazz of the evening by any means. Members of the Oberlin Conservatory’s PI (Performance and Improvisation) Ensemble, directed by Jamey Haddad, put on a free pre-concert show at 6:00 in Reinberger Chamber Hall. Two groups performed —one mostly made up of students, the other mostly of professionals, featuring pianist Kálmán Olah and saxophonist Tim Ries, recent collaborators with PI.

A stunning original composition proved to be the student group’s highlight. It opened up with an atmospheric bass solo by Nate Swedlow, with drummer Danny Frank and clarinetist Giovanni Bertoni also taking super turns at the wheel. Unfortunately balance in the hall was a bit of an issue, the drums too loud in both groups. Here the unique combination of trumpet, clarinet, and viola was sometimes overpowered. 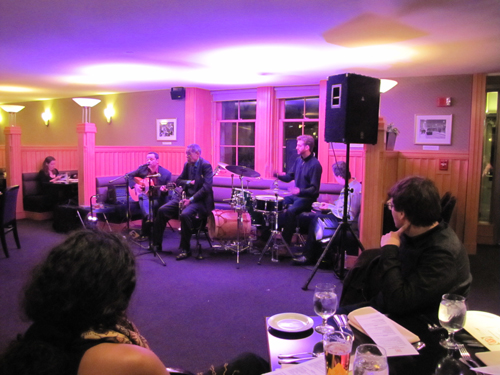 Next up, Ries returned to the stage, joined by Olah, Swedlow, and Haddad on drums for two Olah tunes. In the first one Ries gave a sprawling solo that, though slow to develop, eventually saw him let loose with high, virtuosic cries. Haddad’s shorter solo may have topped the bill: beautifully varied, with a smooth silence near the end. Ries moved to tenor sax for “Always.” The winning composition of the 2006 Thelonious Monk International Jazz Composers Competition, it features a singing melody tinged with dark, shadowy colors.

In between the pre- and post-concert jazz acts was a solid but underwhelming performance by The Cleveland Orchestra. Marek Janowski, artistic director of the Berlin Radio Symphony Orchestra, took the podium without score and seemed to plow through the short program of Hindemith’s Symphonic Metamorphosis and Beethoven’s Symphony No. 2. It felt casual and homogeneous, missing moments that could have been special.

For any tired dance floor limbs, Severance Restaurant was open late, with more good music to be heard there. The Moises Borges Brazilian Jazz Trio serenaded diners, ears full and comfy from the diverse evening of sounds.

Photos: courtesy of The Cleveland Orchestra

END_OF_DOCUMENT_TOKEN_TO_BE_REPLACED

Franz Welser-Möst led the final bows on Saturday night at Severance, like the star of any show should. The Cleveland Orchestra’s music director is in his element presiding over the ensemble’s annual opera production, which this season packs the drama. Verdi’s Otello — in a concert staging that opened May 21 and runs for two more performances (May 26 and 29) — demands big voices, instrumental forces to match, and a conductor who can give it all shape and direction. END_OF_DOCUMENT_TOKEN_TO_BE_REPLACED

The cimbalom was the feature of the show, an instrument capable of taking on many personas. Its performer, Chester Englander, has shaped his career around the instrument, and has inspired composers to write more repertoire for it, some of which was presented on the program. END_OF_DOCUMENT_TOKEN_TO_BE_REPLACED