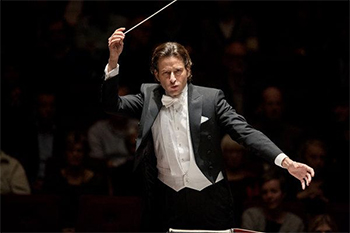 These concerts will mark Gimeno’s third visit to the Orchestra’s podium — the two previous times were at Blossom. “Apart from the wonderful sound and quality of the orchestra, for me, coming back always has a special meaning, because the first North American orchestra I conducted was Cleveland.”

Gimeno, who has served as music director of the Orchestre Philharmonique du Luxembourg since 2015, said that he particularly looks forward to performing the Ginastera with Mark Kosower. “I haven’t conducted it before, but I’m very happy. I have the feeling that I’m going to do it with the perfect cellist for the piece and I’m very curious to hear his ideas.” In a September 2016 interview with ClevelandClassical.com, Kosower talked about his love for the music of Ginastera, and how he came to meet and play for the composer’s wife, the cellist Aurora Natola Ginastera.

“I’ve listened to Mark’s recording because I wanted to prepare as best as I can, and I was surprised by the music,” Gimeno said. “It’s very mysterious and full of color — there is an inner world of personality and depth. It’s modern and it tells a story, but in a different way than Scheherazade. Each movement creates its own concrete atmosphere.”

Because Scheherazade is a popular work and one that Gimeno knows well and has conducted several times, he said there is a danger of having it become routine. “It’s extremely colorful and challenging for everyone — it’s really like a concerto for orchestra, technically and musically speaking. It is well-known, but nevertheless we need to look at the score with freshness and curiosity and bring it new life. We need to tell the story as it was intended — she is telling it to the sultan in order to avoid becoming a martyr.”

Gimeno noted that while Barber’s Overture to The School for Scandal is in the repertoire of most American orchestras, that is not the case in Europe. “It’s challenging, but it sometimes doesn’t sound like it because when an orchestra is playing it well, you don’t get the feeling that it’s difficult. I’ve done it in Europe with orchestras that didn’t know it, and that took a lot of rehearsal time because it’s tricky to figure out what’s important, and how the voices interact. It’s very exciting and complex, but the young Mr. Barber was full of ideas.”

When he’s not in front of an orchestra, Gimeno said that he enjoys studying scores, and seeing how the music looks on paper. “I enjoy that loneliness with the score. It’s a process of getting to know it, which never ends because even if you’ve done a piece a number of times, you still get to parts and think, I didn’t see this before. You also discover that things are not as you remember, and that might open a door to your imagination. Like I said with Scheherazade, it’s very easy to fall into routines with interpretation. But it’s always an interesting process, no matter how many times you’ve done a piece.” 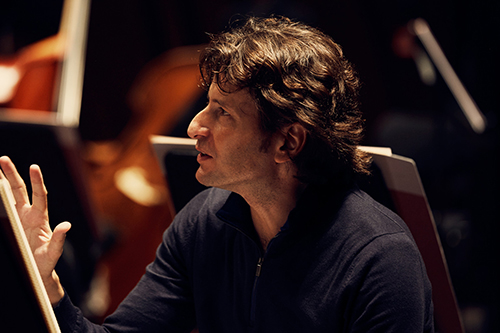 On September 17, the Toronto Symphony Orchestra announced that Gustavo Gimeno would become their 11th Music Director beginning in 2020/21, the Orchestra’s 99th season. What does the Spanish-born conductor find to be his biggest challenge?

“Of course you have your own ideas, but in order to know what you have to do in the future, you have to understand the history of an orchestra — what has been done in the past, what has been done recently, and what the future goals are. It’s very important to me for the population of Toronto to identify themselves with the Orchestra. It is our job to serve the community and to be present in the city.”

In addition to deepening the TSO’s roots in the community, Gimeno also wants the Orchestra to further develop its international presence. “I wouldn’t say those two things are contradictory, but they need to complement each other. I want it to continue to be one of the best ensembles in the world — the Orchestra deserves to be a cultural ambassador for Canada. So now we have to work to see what we can bring to Toronto, to Canada, and to the world.”

The music isn’t easy to play, either. Over the course of two hours, all of the musicians brought fantastic focus to the unrelenting tricky rhythms and countless layers of parts, all of which require a high level of individual responsibility. Even in the moments of calm, the accompaniment remains perpetually unsettled. Adams — who made a sprightly presence on the podium — combines minimalist, repeating motives in gradual layers, which eventually become so dense they overwhelm the senses. Lisa Wong deserves special mention for her thorough preparation of the Cleveland Orchestra Chorus, as does Jennifer Rozsa for the Children’s Chorus, which made a brief but memorable appearance in the last few minutes. END_OF_DOCUMENT_TOKEN_TO_BE_REPLACED

Warner was a fitting choice not just symbolically, but also sonically. The combination of Baroque strings, theorbo, harpsichord, and organ created a nice blend and balance, allowing the opportunity for softer instruments to stand out. In Johann Rosenmüller’s Sonata à 5 in g, Doug Balliett’s violone pizzicatos resonated beautifully, and in Johann Heinrich Schmelzer’s Sonata in d, harpsichordist Elliot Figg became an equal player in the texture with his clever improvisations. The slight exception was Joshua Stauffer on theorbo — despite the instrument’s big physical presence on stage, he received little time in the spotlight. END_OF_DOCUMENT_TOKEN_TO_BE_REPLACED