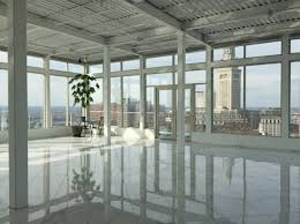 Not so very long ago, downtown Cleveland used to be deserted on weekend evenings. Not any more. On Friday, November 18, a political protest march mingled with a Cavs crowd and a sea of other downtown-bound folk to bring traffic (vehicular, foot, and equestrian) on Euclid Avenue to a complete standstill. One of the smaller audiences to assemble downtown that evening came to hear an excellent performance by Cleveland Orchestra musicians and friends sponsored by Heights Arts, nearly filling a private glass box party room rising sixteen floors above the hubbub below.

The concert, part of Heights Arts’ Close Encounters series of chamber music performances, featured violinists Isabel Trautwein and Yun-Ting Lee, violist Yu Jin, cellists Tanya Ell and Paul Kushious, and clarinetist Robert Woolfrey in a program titled “The World’s Best Chamber Music, Jawohl!” Who could argue with that when the musical menu included Mozart’s Clarinet Quintet and Schubert’s “Cello” Quintet — the one that adds a second cello to a string quartet.

The ambiance for the event was informal and relaxed. When she discovered that Ell’s biography was missing from the program, Heights Arts CEO Rachel Bernstein offered to read it off her phone, but the cellist politely waved her off. When the Schubert came around, Trautwein gave a disarming, Anna Russell-like introduction to the piece, likening its sonata form to a three-act play (“in the first act, you meet the characters, in the second everything gets messed up, but in the third, it all gets sorted out”) and describing the development section as “a brouhaha.” Little snippets from the piece were amusingly offered by way of illustration, and laughter abounded.

The playing was first-rate. Lee and Trautwein divided up the first violin work equally, and each led their respective ensembles — Mozart and Schubert — expertly. Robert Woolfrey wove his lines into the ensemble in the Mozart with cool, subtle assurance and luscious tone. Yu Jin shone in the third of the variations.

The Schubert — not heard as often as it should be — is probably one of the most skillfully-wrought chamber pieces of the 19th century. And what better tools for a born melodist to work with than two cellos? Ell and Kushious spun out gorgeous duets together. The players moved the long work along with consummate skill and a fine sense of pace.

Wine and desserts came out during intermission, and many audience members took advantage of the balmy temperature to admire the panoramic view from the outdoor terraces, despite brisk winds.

Heights Arts got this event exactly right — a splendid example of how to organize an evening of chamber music.

END_OF_DOCUMENT_TOKEN_TO_BE_REPLACED

Franz Welser-Möst led the final bows on Saturday night at Severance, like the star of any show should. The Cleveland Orchestra’s music director is in his element presiding over the ensemble’s annual opera production, which this season packs the drama. Verdi’s Otello — in a concert staging that opened May 21 and runs for two more performances (May 26 and 29) — demands big voices, instrumental forces to match, and a conductor who can give it all shape and direction. END_OF_DOCUMENT_TOKEN_TO_BE_REPLACED

The cimbalom was the feature of the show, an instrument capable of taking on many personas. Its performer, Chester Englander, has shaped his career around the instrument, and has inspired composers to write more repertoire for it, some of which was presented on the program. END_OF_DOCUMENT_TOKEN_TO_BE_REPLACED