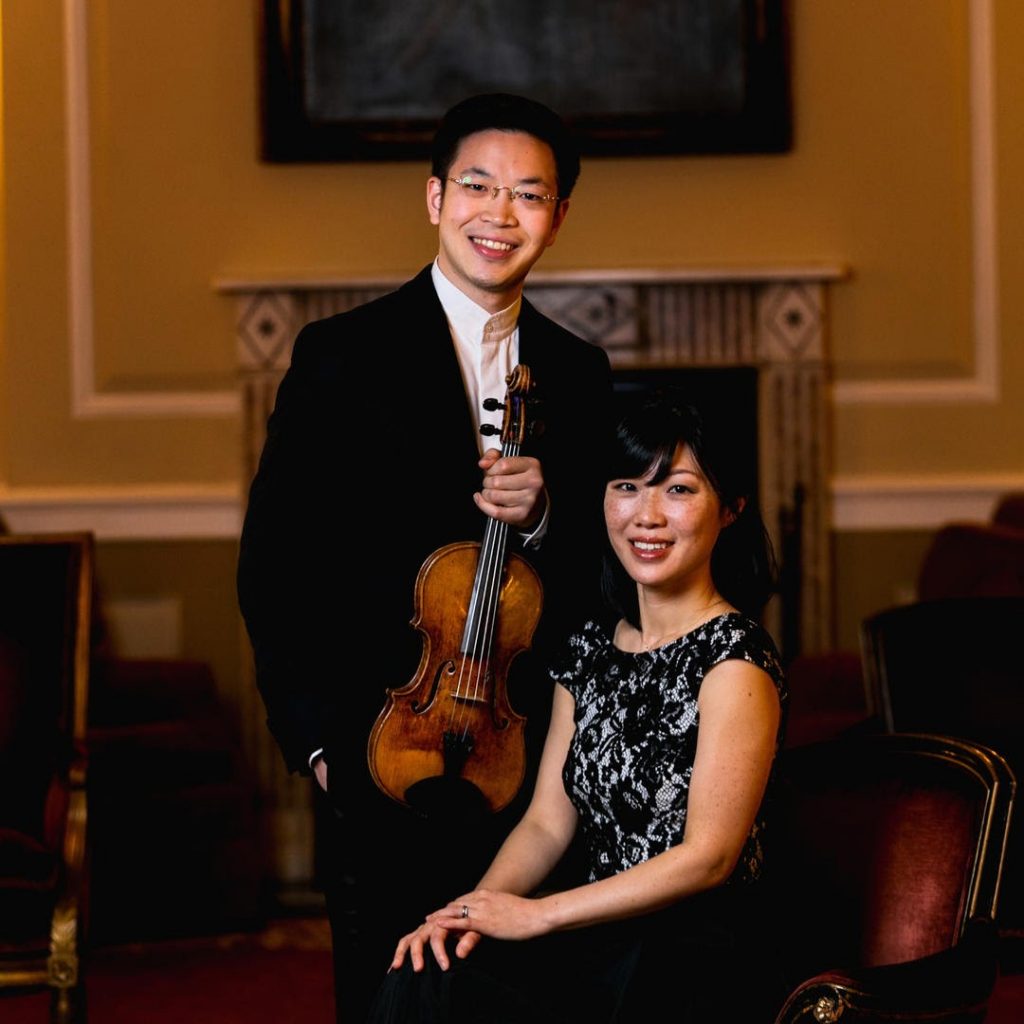 Almost a decade after violinist Paul Huang and pianist Helen Huang first performed together, their collaborative spirit is still going strong. The two acclaimed artists are eager to perform as a duo again this year, starting with their upcoming appearance as Kulas Visiting Artists on the Kent Blossom Music Festival’s Faculty Concert Series.

On Wednesday, July 14 at 7:30 pm, the duo (who share the same surname but are not related) will present a broad range of sonatas by Mendelssohn, Corigliano, Ysaÿe, and Franck at Ludwig Recital Hall. In-person tickets can be purchased on the Festival’s website, and the concert will also be live streamed here.

Because the pair performs recitals frequently, “every year we always have a different program,” Paul Huang explained in a recent phone interview. This set of repertoire was originally scheduled for 2020 before being postponed, and the two will also play it on tour in Taiwan later this year. “It’s a program that includes a lot of variety, and quite a few pieces by famous composers that are seldomly played.”

One such piece is the concert’s opener, Felix Mendelssohn’s Sonata for Violin and Piano in F. Composed and premiered in the 1830s, it otherwise remained unplayed until the great violinist Yehudi Menuhin published it in the 1950s. “This piece has Mendelssohn’s typical spirited lightness and charm,” Huang said. “But it’s also a deeply moving work, with one of my very favorite slow movements in all the sonata repertoire.”

Composer John Corigliano is best known for his 1999 film score for The Red Violin, but the duo delved a bit deeper into his repertoire to choose his Sonata for Violin and Piano. “The sonata encompasses a lot of American elements, and has a lot of jazz influence,” Huang said. “You can even hear hints of West Side Story here and there.” The piece, which is relatively new to them, is particularly demanding for both instruments.

No matter the difficulty, the teamwork between the violinist and pianist remains secure. “I think that the way we approach a piece of music and how we envision it is always very similar,” Huang said. “Our process of getting something to performance level and creating an interpretation where both of us are happy has always lined up together.” That shared mindset was evident to both players from their first rehearsal, after they were put together by a presenter in Boston. “We love playing with each other, and we love discovering new music together, so it’s been a wonderful blessing.” 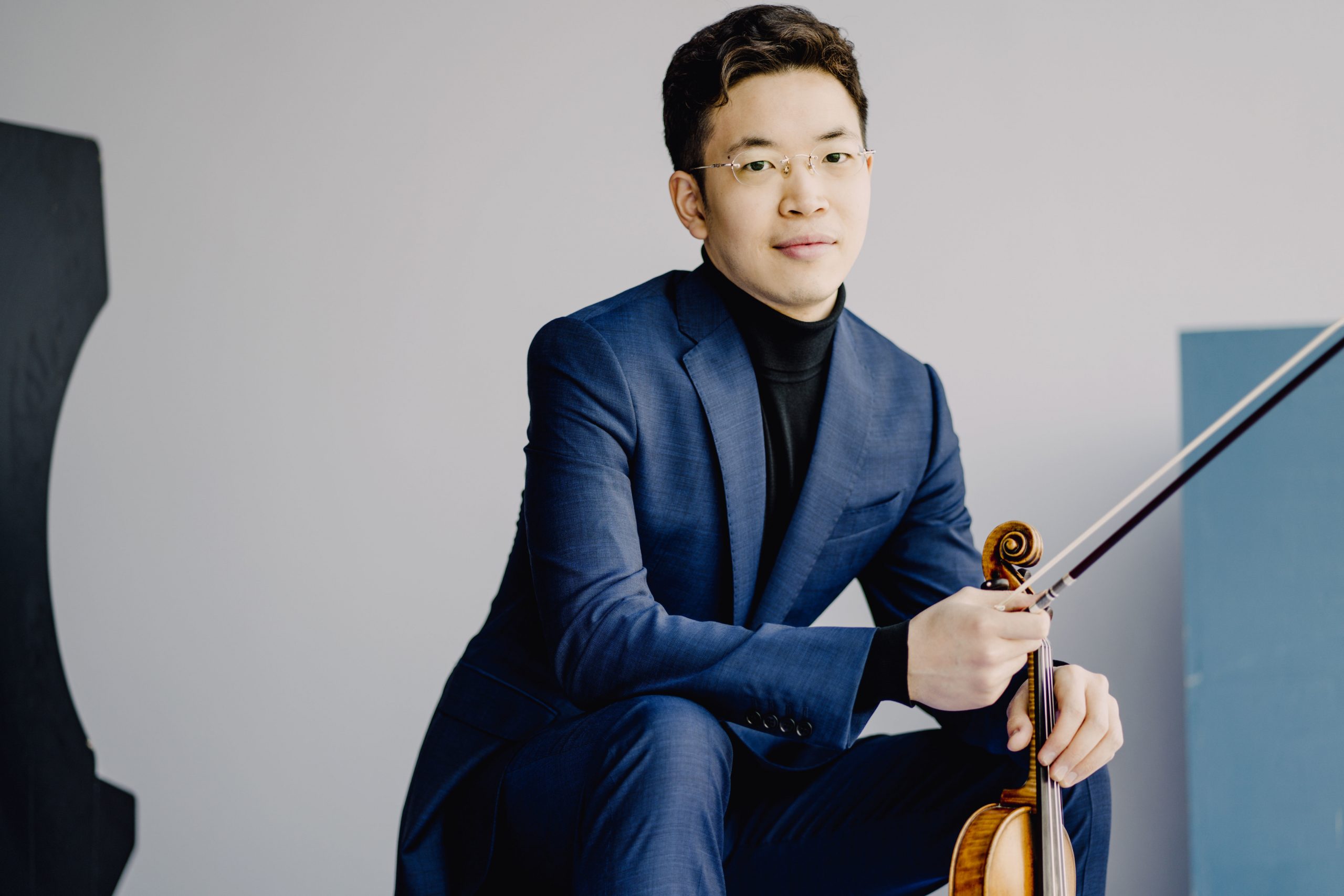 The second half of the program pairs works by Eugène Ysaÿe and César Franck, two composers who expressed their friendship through music — specifically, Franck’s Violin Sonata in A, which he wrote for Ysaÿe as a wedding gift. This “evergreen” sonata, one of the most famous works for violin, will be performed together with Ysaÿe’s Sonata No. 3 in d. The third of a collection of six solo sonatas, this work is titled “Ballade,” which Huang (pictured) described as “a story without a storyline

“It really encourages the audience to use their imagination at any given moment, based on what they hear — virtuosic passages, color differences, or things like that. So the piece tells these stories within six minutes and invites the audience to be part of this creative process.”

These kinds of conversations between the audience, the performers, and the music are central to chamber music, which Huang called the “pinnacle” of the art form.

Music director and conductor Daniel Meyer built his playlist around Cleveland themes and scenes. “Exploration CLE” made use of engaging selections from the classical canon and beyond that celebrated “what makes Cleveland so special.” Happily, he and his musicians avoided constructing a visual slide show, choosing to let the music speak for itself. END_OF_DOCUMENT_TOKEN_TO_BE_REPLACED

You could see the relationship at work on a practical level. Repertoire for two players at the same piano requires a certain choreography. There’s just one of each pedal to share, and the hand crossings left and right — which can be so fun to watch a soloist pull off — get more complicated when another person’s involved. At times, Pompa-Baldi drew a hand away from the keyboard and into his body, making room for Friscioni, and at the close of a few delicate phrases, the two were crouched together over the same final notes at one end of the instrument. END_OF_DOCUMENT_TOKEN_TO_BE_REPLACED

The signature sounds of these famous film scores are not so much John Williams’ invention as allusions to other classical pieces. The foreboding half-step from Jaws, growing more and more furious in the cellos and basses, shares something with Dvořák’s “New World” Symphony and Bartok’s Miraculous Mandarin. END_OF_DOCUMENT_TOKEN_TO_BE_REPLACED